Northport Yearbooks: Echoes of the Tigers

Highlights from our collection of Northport High School Yearbooks 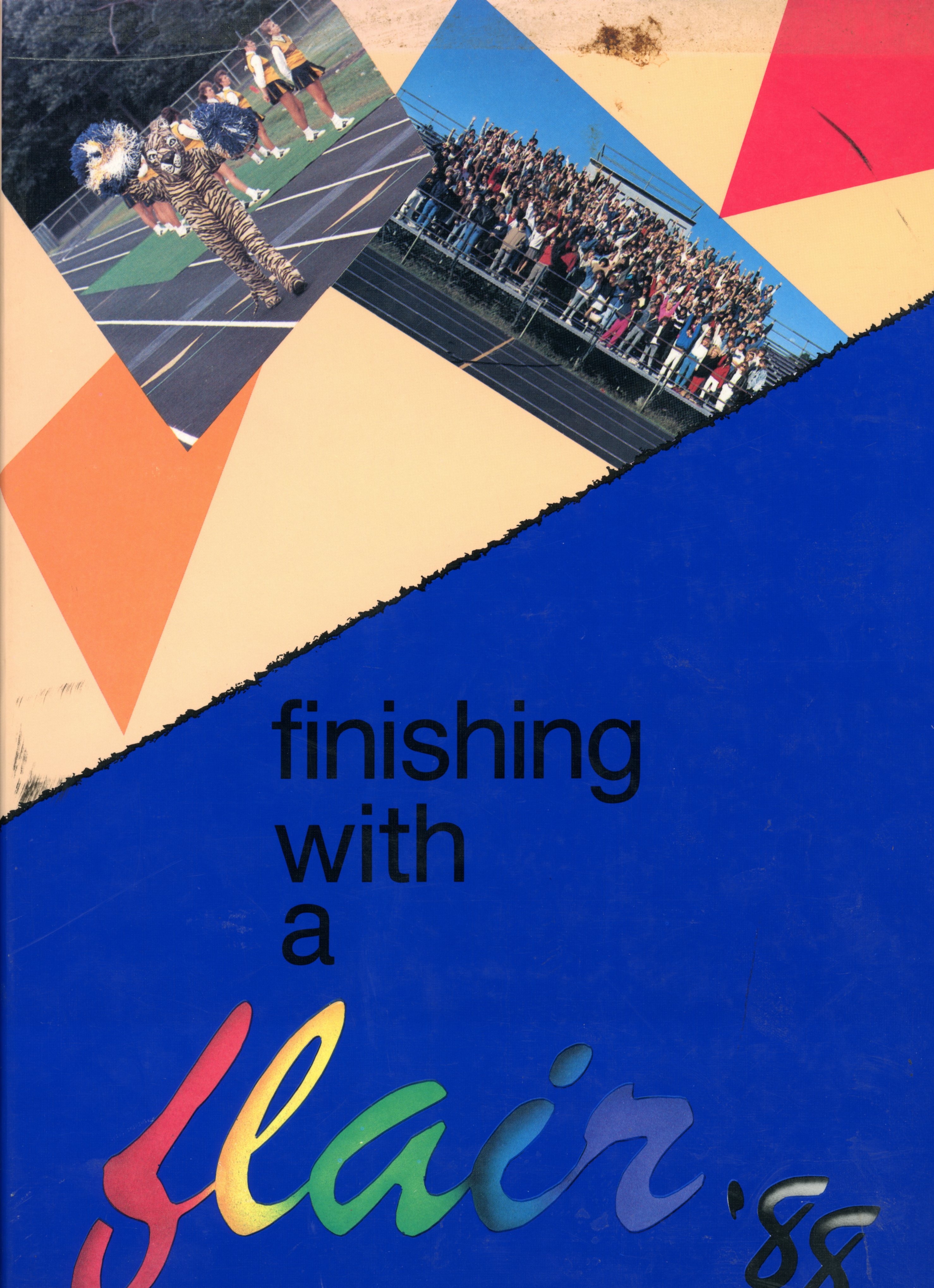 You can see all our vintage Northport High School yearbooks for yourself in our new Carnegie Research Library, open to the public starting June 2nd. You can find the Northport Historical Society hours of operation on the main page of our website.

The senior year book holds a special place in American society. It is a time capsule of both the individual experiences of teenagers, and of the times they lived in. Here at the Northport Historical Society, we are lucky enough to have some of the oldest Northport High School Yearbooks in our Carnegie Research Library. They have had many names-- The Echo; Tiger Tales; Common Ties; The Spotlight-- and they changed to reflect the lives of the students who created them. Here are some highlights from the books in our collection. 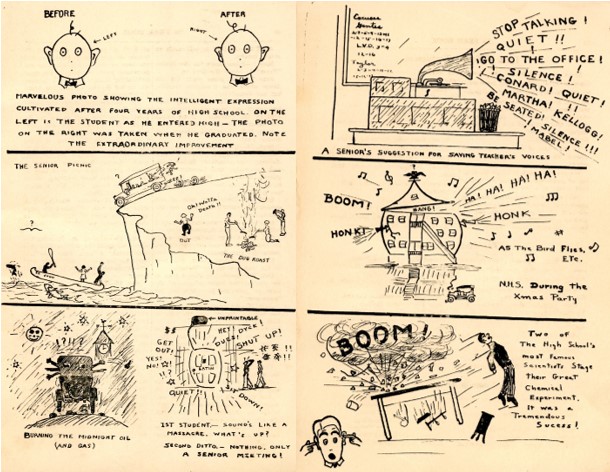 High school in the 1920s was located on Laurel Avenue in what is now the Brosnan Administration Building. Back then, the graduating class was less than fifty children! With such small public school class sizes yearbooks from the 1920s-1950s were able to reflect so much of individual students’ personalities. The most common elements of the yearbook genre are the senior portrait, superlatives, class history, class prophecy, and class will. 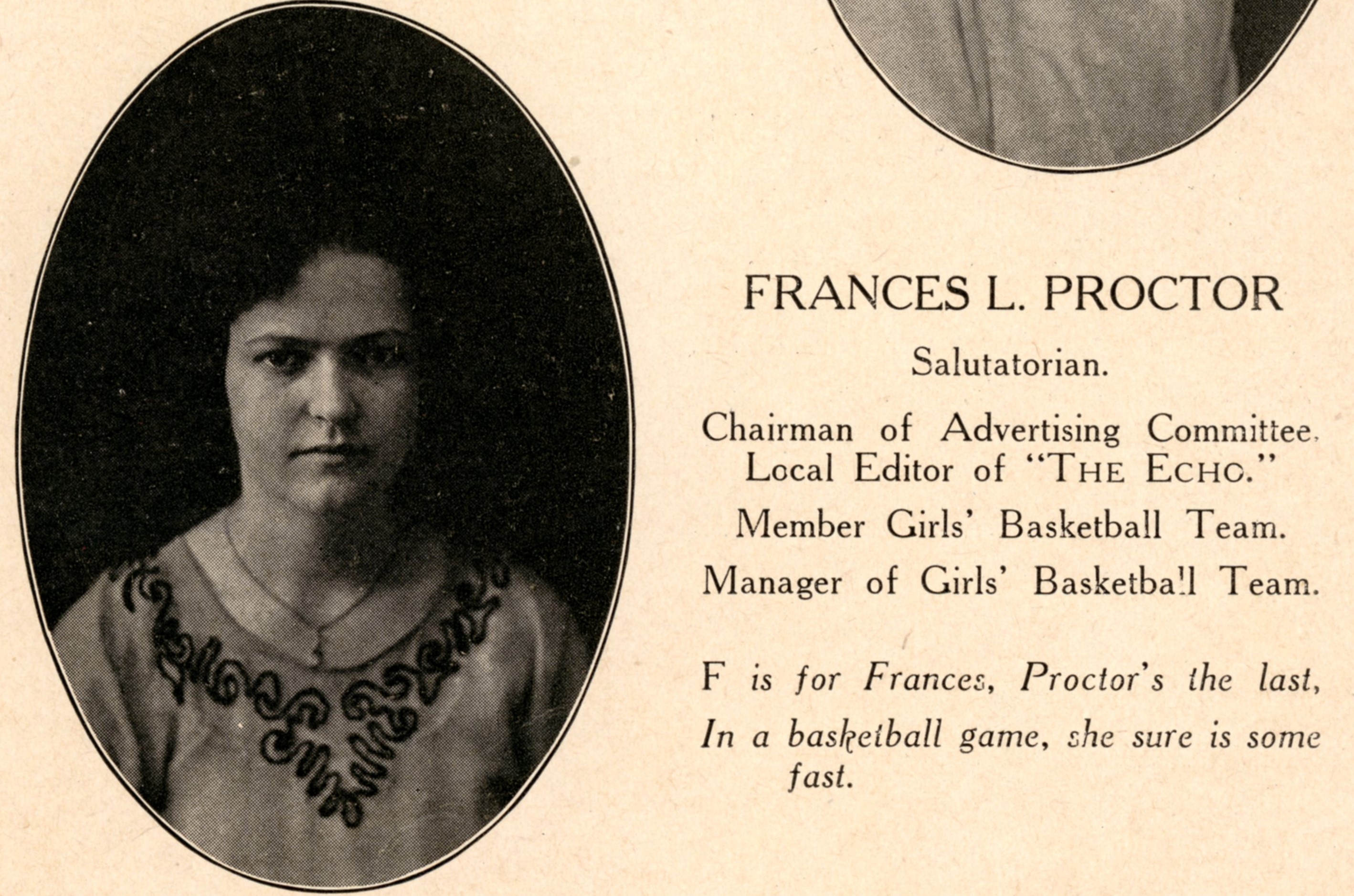 Just like today, the earliest yearbooks open with senior portraits identified by name, participating clubs, and a tagline. Our 1921 yearbook feature rhyming couplets for each student like the one above: “F is for Frances, Proctor’s the last,/ In a basketball game, she sure is some fast.”

The qualities of student portraits have gone through fads themselves. In the 1920s-40s yearbooks, students uniformly had formal portraits. In the 1950s, however, candid photos begin to accompany formal portraits for seniors, only to disappear again by the 60s.

Then there is the Order of Events, a list of all that occurred from freshman through senior years. Each line is short and pithy:

To flesh out the calendar-like Order of Events, there are the Class History, which are funny, honest, and at times rueful editorial summaries of the last years of grade school. Like the Order of Events, they highlighted important tests like the Regents exams, money-raising schemes like bake sales, concerts and plays, and class trips. They are concise, and self-consciously so. “Other things kept happening, but in order not to recall too much ancient history, they will be left to imagine how interesting they were,” said the writers of the 1921 Class History. In later years, each grade was given the opportunity to write their own class history each year.

The ancestor of today’s categorical Senior Superlatives, which each year name two students as “best dressed”, “most athletic,” or having the “kindest smile”, can be found in a variety of styles. These sections are some of the funniest in yearbook history because when your public school graduating class is less than twenty people, you can include almost endless well-meaning inside jokes in your publication. 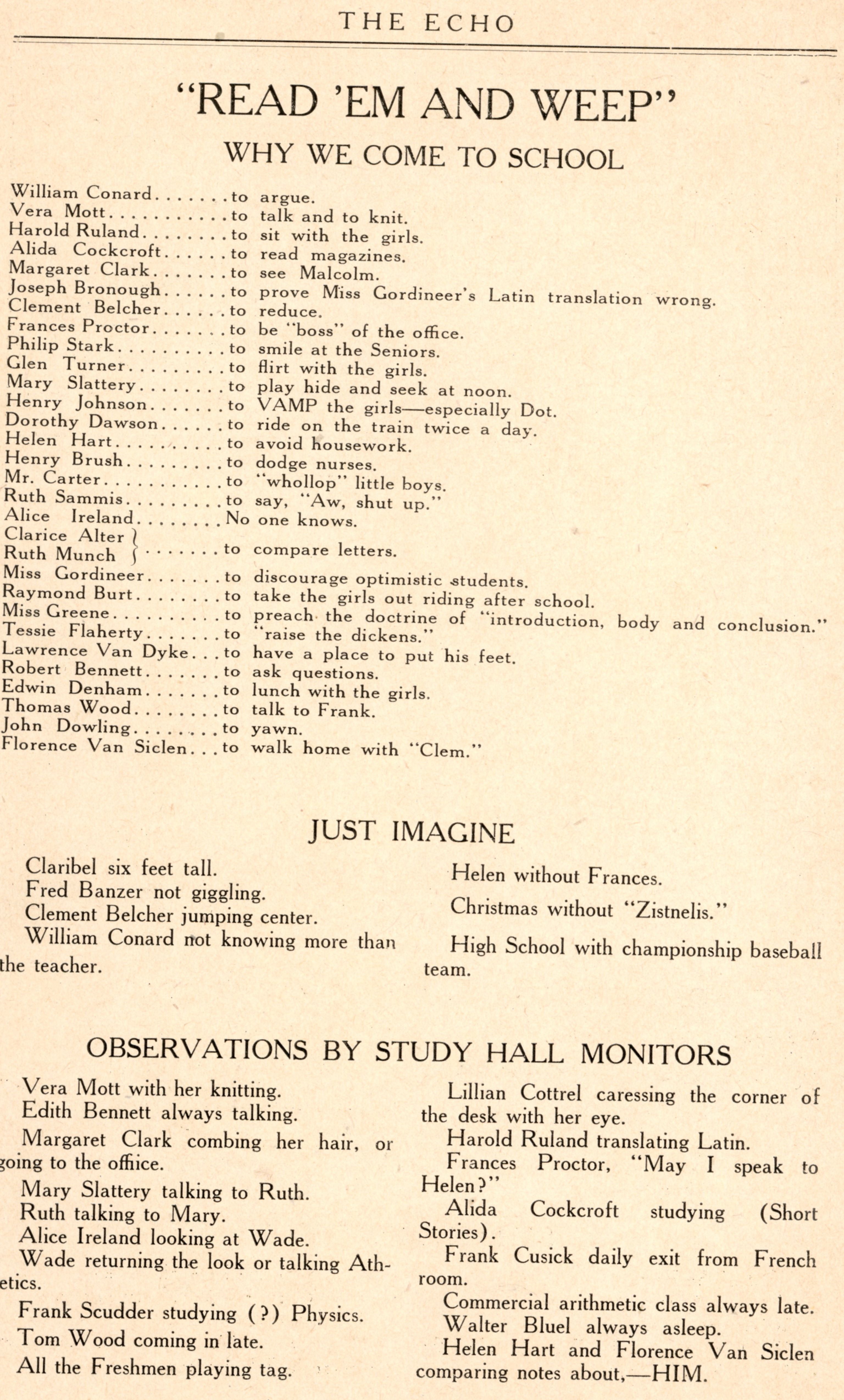 Seen above, the 1921 yearbook includes three superlative-ancestors: “Why We Come to School”, “Just Imagine”, and “Observations by the Study Hall Monitors”. Apparently Ruth Sammis only went to school “to say, ‘aw, shut up,’” and nobody could imagine “Christmas without ‘Zistnelis’”. Dear reader, have fun trying to figure it out at home, because we don't understand it either. 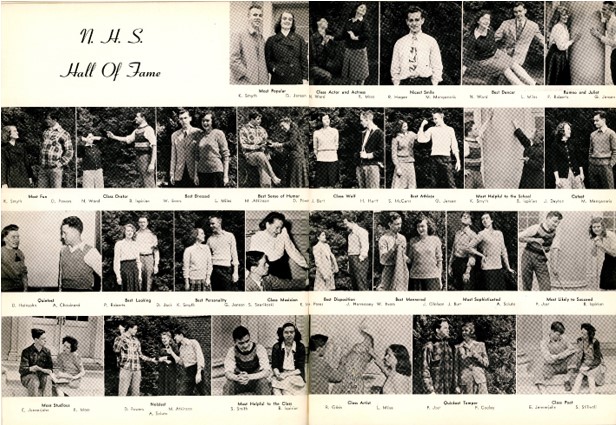 Starting around 1927, we start to see the inclusion of the two most unique elements of the vintage yearbook: the Class Prophecy and Class Will. The Class Prophecy is an imagining of what each senior will be doing in the future. There is often a framing device used for this fiction: someone ends up in the future or falls asleep to a divinatory dream. The predictions for these men and women give incredible insight into the times they lived in. The 1930 yearbook, pictured below, foresees a very modern future for some Northport girls:

“Say, what a classy building. And look at the airplanes packed in back… The butler says that it is the crystal wedding anniversary of General and Mrs. Edward Olsen, U.S. Army. Well, if it isn’t dear old Alice. It looks as though Eddie’s eight periods in library weren’t wasted after all. And please observe the distinguished guests present: The Honorable Miss Eleanor Dexter, President of the United States; Rear Admiral Robert Partlow, of the S.S. Long Island; and Miss Edna Aitken, Speaker of the House of Representatives, are outstanding guests.” 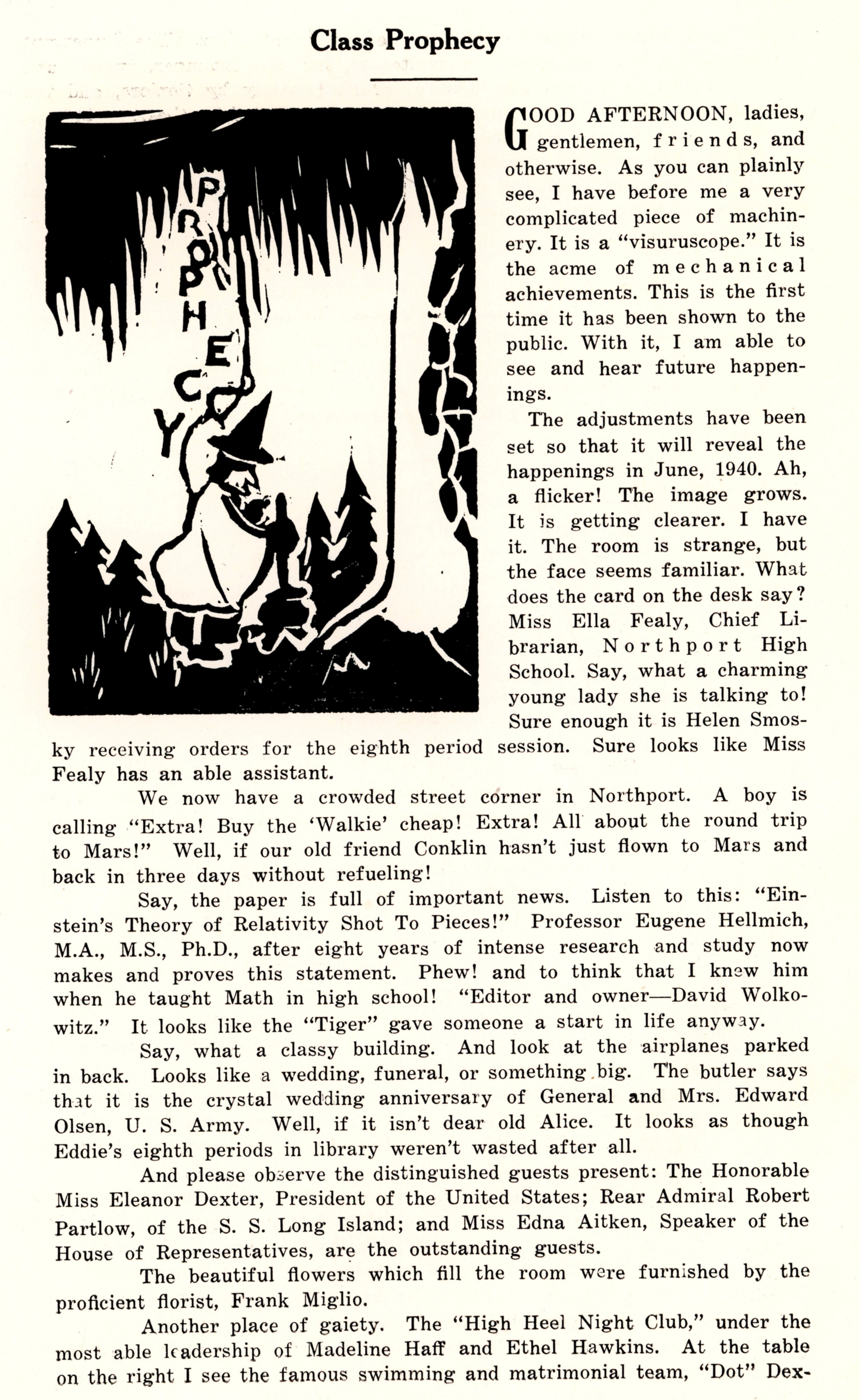 Other prophecies are tongue-in-cheek. 1938 brings scientists trying to perfect TV and managing to use it to see the future:

“And now, beloved friends, we see on the screen a grave… Let us bow our heads a moment for our beloved deceased Larry Fischer, who passed away June 27, 1938. He dropped dead from shock on the stage when they handed him his diploma. Ah! well, so goes life.” 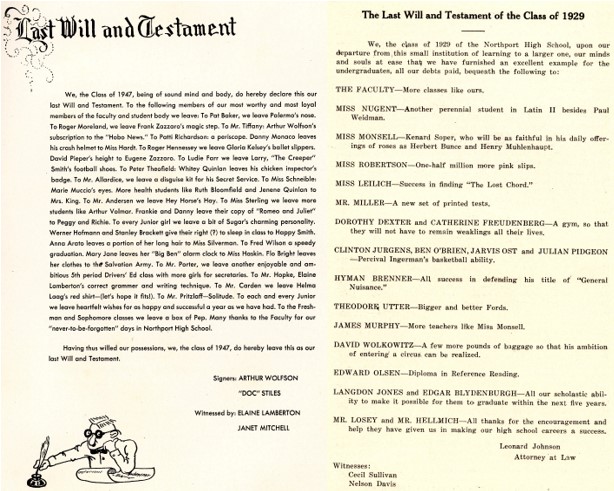 The Class Will is equally amusing, but oriented towards faculty and underclassmen. Since the testament is written “by the class” it is often difficult to tell which bequests are related to which seniors; like so much else of these books, understanding hinges on shared experience and inside jokes. Some legacies erred on the side of sarcasm: in 1929 a Miss Dorothy Dexter and Miss Catherine Freudenberg were left “a gym, so that they will not have to remain weaklings all their lives” presumably bequeathed by departing members of a girls sports team. Or, in 1947: “Werner Hofmann and Stanley Bracket give their right (?) to sleep in class to Happy Smith.” It was usual to give thanks to class advisors and luck to the younger students.

“a meat ball to Harry Holden”

Adding to the humor are the joke ‘witnesses’, which have included “four Marx Brothers”, gangster John Dillinger with the FBI agent who shot him, Melvin Purvis, and in 1938 things turned dark with the deadly trio of Adolf Hitler, Benito Mussolini, and Josef Stalin. Perhaps feeling shaken by their predecessors’ choices, the ‘39 will was ‘witnessed’ by Snow White and the Seven Dwarfs. 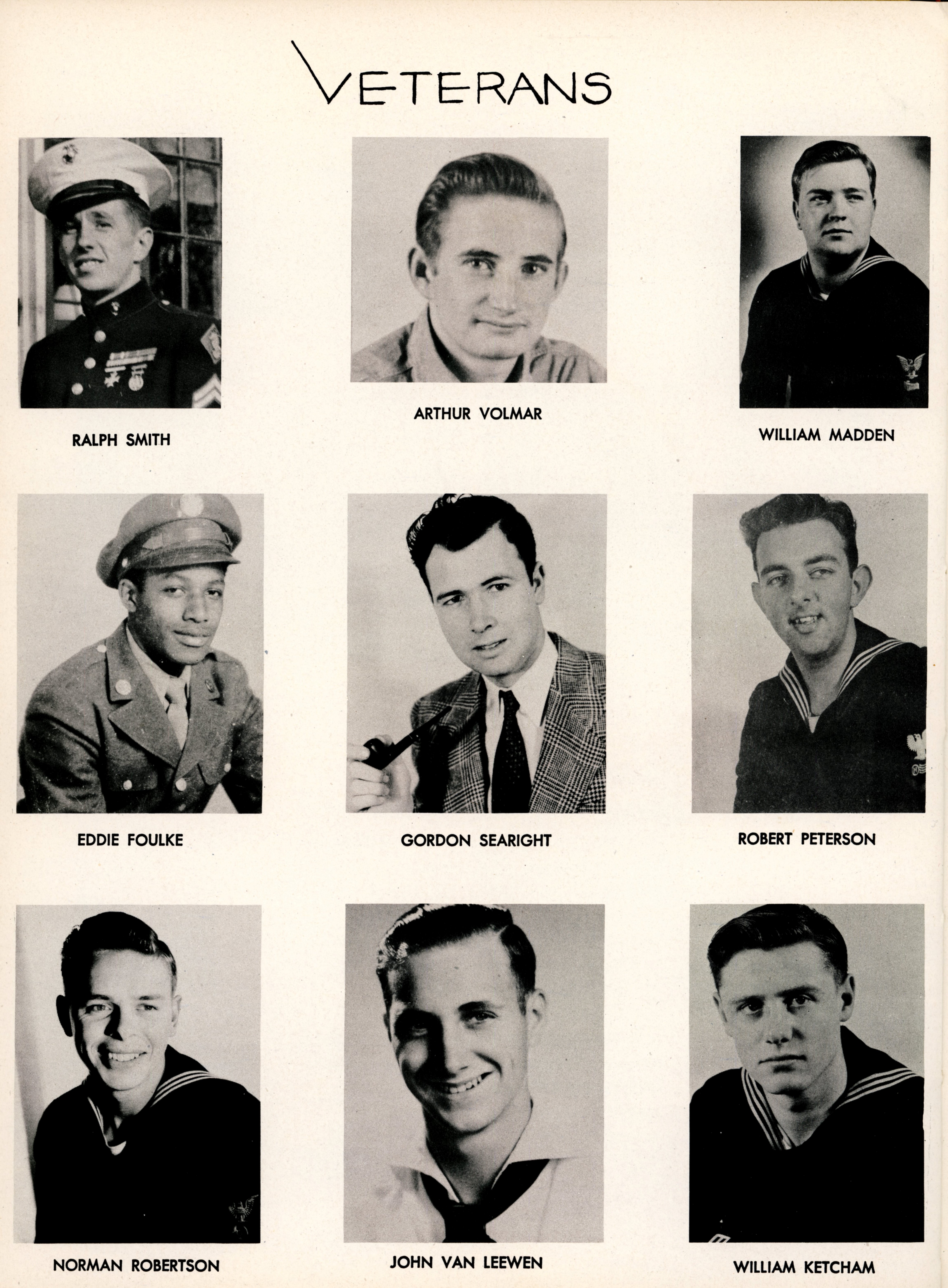 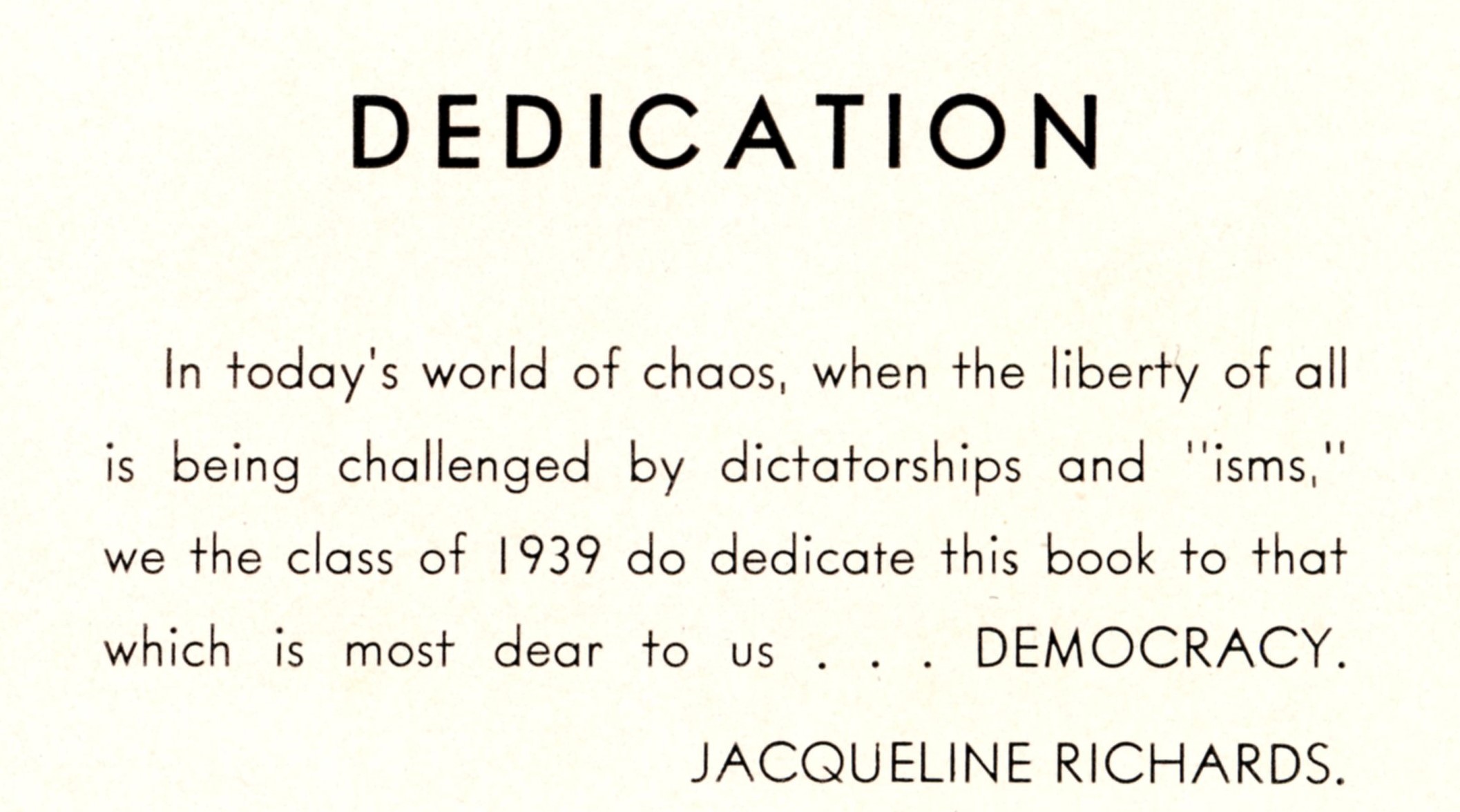 Yearbooks also reflected the maturity of the graduates. In 1939, literary editor Jacqueline Richards wrote: “In today’s world of chaos, when the liberty of all is being challenged by dictatorships and ‘isms,’ we the class of 1939 do dedicate this book to that which is most dear to us… DEMOCRACY.” From 1943-1945, Northport yearbooks included an Honor Roll page for fighting men, while 1947 includes a page with pictures of youthful Northport veterans.

Things were changing for Northport schools by the middle of the century. Long Island, Northport, and East Northport were experiencing a huge population boom as families grew larger and moved into newly built housing communities. In 1955, high school students made the brand new building on Middleville Road their home until the current high school at the intersection of Laurel Hill Road and Elwood Road opened in 1966. By the 1950s the Class Prophecy disappeared; the Class Will hung on until 1964, when it was relegated to the very last page of the book before disappearing completely by 1966. 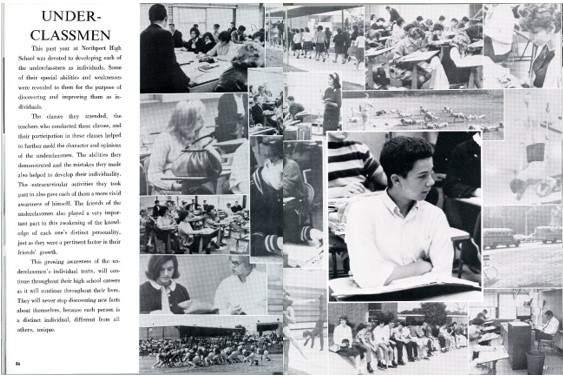 Starting in the late 1940s, more room was given to the pages describing the school’s various activities, clubs, and sports teams with paragraphs of text. By the 1960s, practically every page had a picture on it and many had no text at all. Photographs were printed from sports games, theatrical performances, club debates, and candid life. 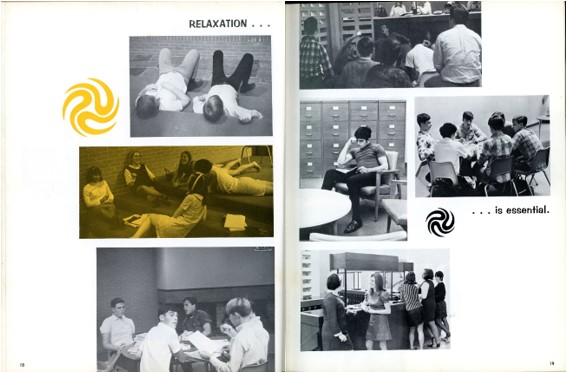 Now that you understand the DNA of the yearbook genre, give your own high school yearbook a look with new eyes. And if you are in high school yourself, consider bringing back some of these vintage elements (I vote for the Class Will!) to add something unique to your yearbook.

You can see all our vintage Northport High School yearbooks for yourself in our new Carnegie Research Library, open to the public starting June 2nd. You can find the Northport Historical Society hours of operation on the main page of our website. 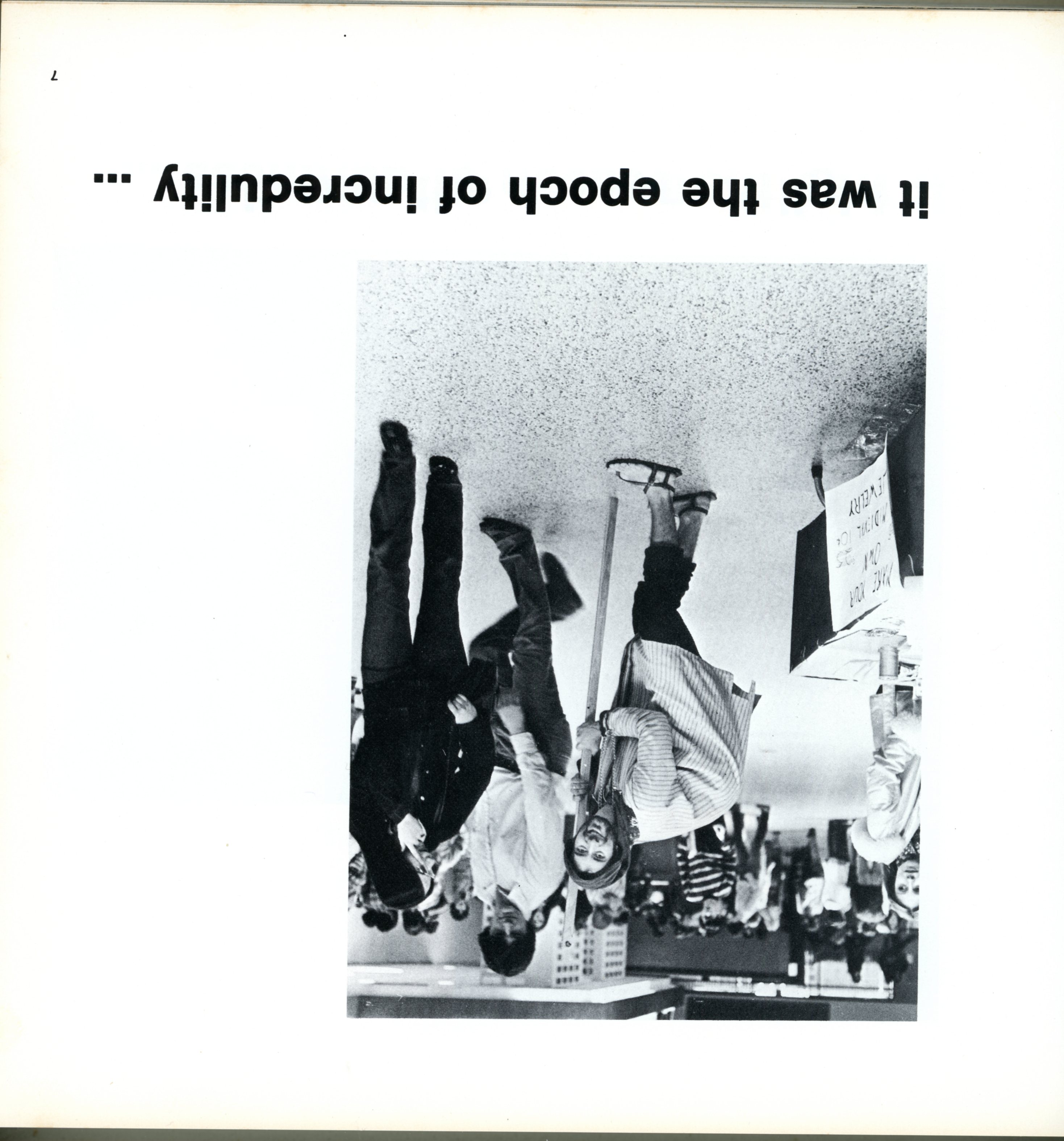 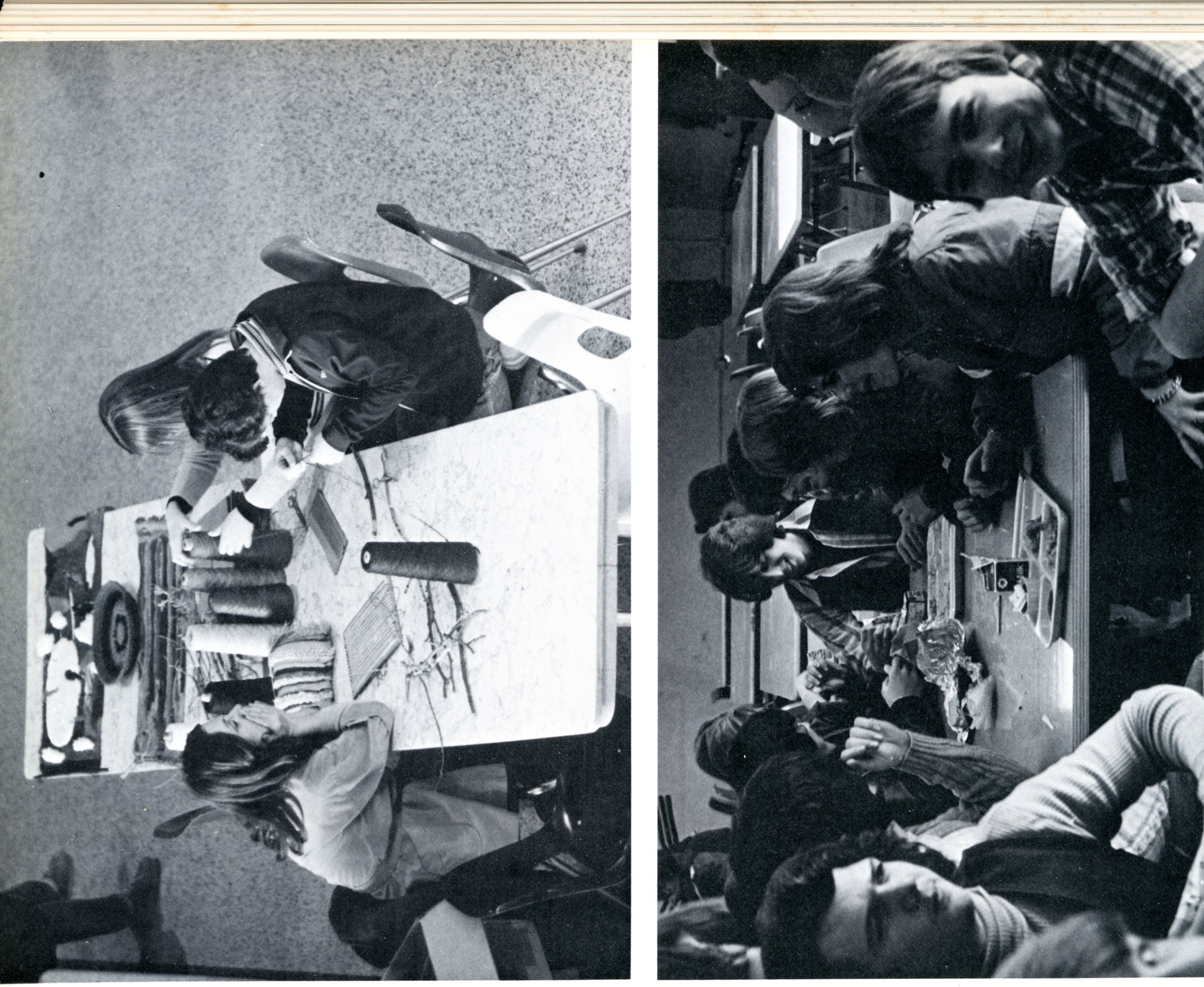 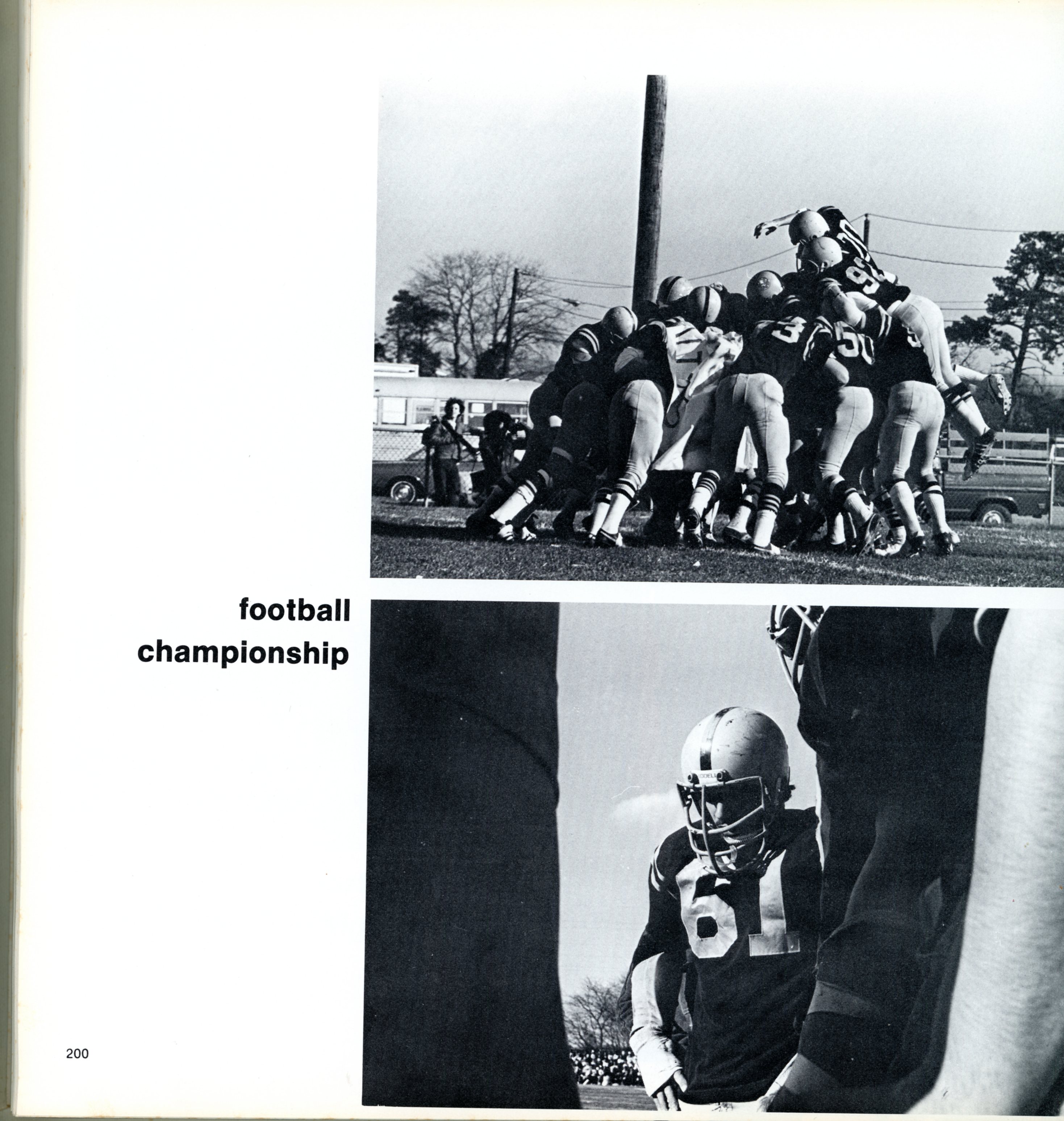