The early part of the decade saw some upheaval in staff and board members; however, the Society maintained a full slate of programs, exhibits and events which included, “Northport in the First World War,” “Women of Distinction,” and “Master Builders of Northport.” Gardens on the Harbor and the Holiday House Tour were very successful fundraisers as well as Sunset on the Harbor and Mrs. Nigro’s Tea Room. In 2003, the Society hosted its first Long Island Arts and Antiques Discovery Day. Modeled after “Antiques Roadshow,” ticket holders were given the opportunity to bring their treasures to be appraised by a panel of experts, including Lark Mason, who had often appeared on Roadshow.

In 2004, Gloria Sandler stepped in to become acting director and served as board president. During the next year, she and the renovation committee which included, Ted Kaplan, Henry Tobin, Lois Howe, Barbara Nigro and Patricia Watkins, oversaw a full-scale interior renovation of the museum’s gallery. Funding for the work came from fundraising, grants, and a sizable bequest from the estate of Dorothy Sammis, a long-time volunteer. During the six-month closure, new exhibit lighting was installed, the cypress cabinets were re-finished, and the gallery walls painted. Perhaps the most significant improvement though was the removal of the asbestos tiled floor, which revealed the original yellow pine floor. John Amato was able to restore it back to its original beauty. In the Fall of 2005, the museum re-opened to the public with a new exhibit, “Our Treasures, Your Treasures,” a mix of our most important items from our permanent collection, paying homage to all those who had donated them over the years. Also in the Fall of 2005, a new director, Rosemary Feeney, was hired.

One of the Society’s most critically acclaimed exhibits, “Burying Grounds: Art, History and Genealogy,” opened in 2007. The exhibition, which received a glowing review in The New York Times, featured nine local historic burying grounds. Using photographs, stone carving tools, and artifacts associated with the traditions of mourning the dead, patrons learned about the symbolism carved on the gravestones and about the stone carvers themselves. Members of the Society participated in the clean-up of Middleville Cemetery, which is maintained by McGill University Alumni, and brought the plight of other neglected burying grounds to the attention of the Town of Huntington.

Also, in 2007, the historic house surveys, originally done in 1978, were updated. Almost every house in the Village of Northport was photographed and the house history updated. These records are readily available at the museum.

Terry Reid, a former board member and volunteer began the task of digitizing the collection in 2009. Adding to the thousands of photographs already scanned into the museum software’s database by Steven King, Terry, along with other volunteers and interns entered the accession records of documents, clothing, tools, art, and other artifacts. Today, over 10,000 records have been digitized and are available for patrons to view on the kiosk in our reference library.

Education has always been a big part of the Society’s mission. Museum Educator Kari-Ann Carr, who came on-board in 1999, developed the “Discovering History” program for grades K through 5th Grade. She also developed “History Takes a Vacation” which are programs offered to children during school breaks. 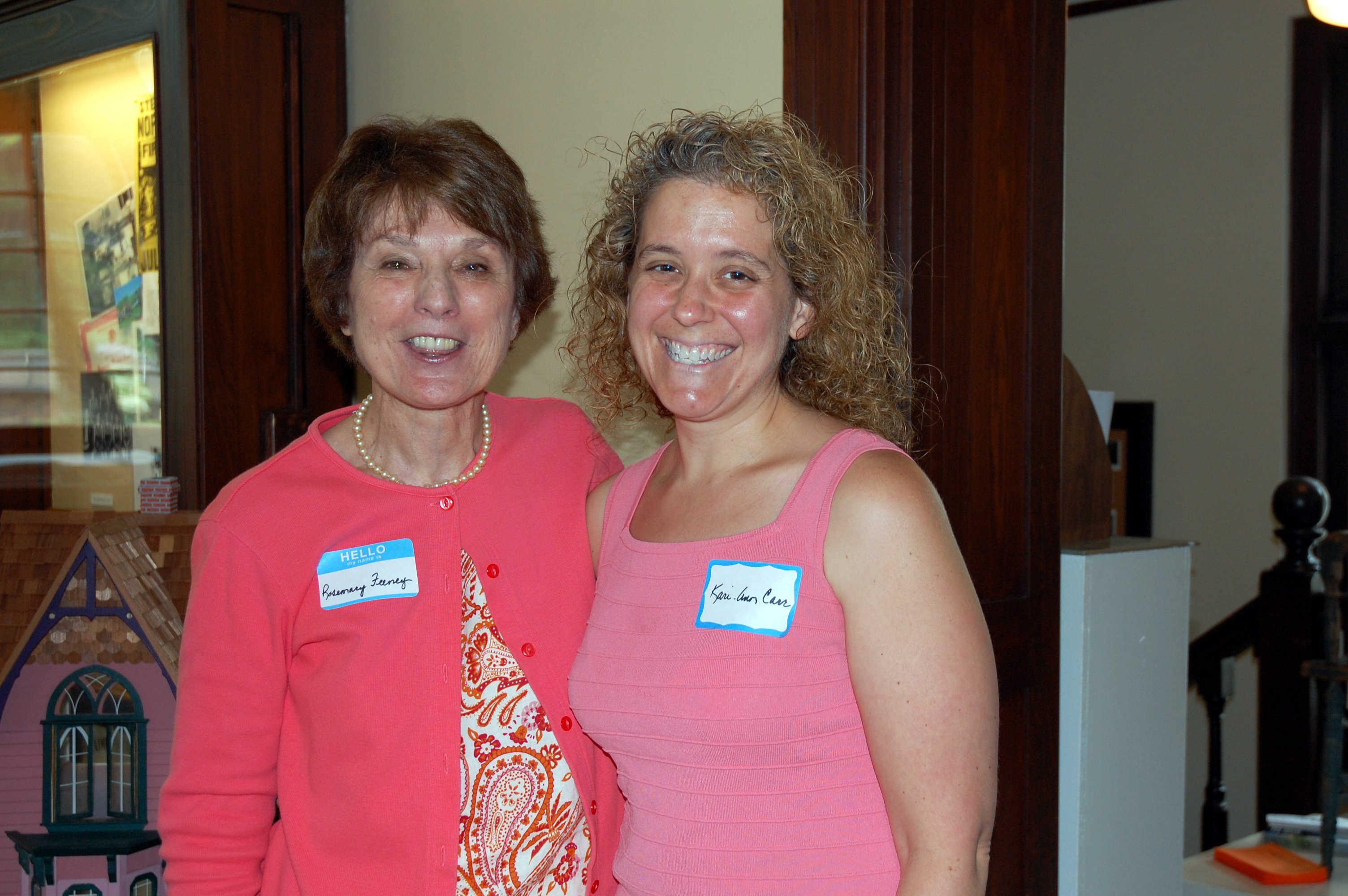 Past Director, Rosemary Feeney and past Educator, Kari-Ann Carr

After Rosemary’s retirement in December of 2010, the Society hired Heather Johnson as the new director. Heather, along with Board Presidents Lois O’Hara, and Steven King, would be instrumental in planning for the Society’s 50th Anniversary in 2012. A very ambitious schedule of “50 Events for 50 Years,” was planned. This included the implementation of two new programs, “Sunday at the Society,” a free lecture series, and “Taste of Northport,” where guests gathered at local eateries such as Pumpernickel’s, Tim’s Shipwreck Diner, and Crossroads. Both these programs continue to be popular today.

Our 50th year culminated in our Anniversary Gala, held at the Northport Yacht Club with honoree, Mayor George Doll. In Steven King’s “Letter from our President,” at the 2012 annual meeting, he stated that, ‘Now, as always, we face new challenges, such as better integrating ourselves with the digital age and improving the accessibility of the collection to future generations.’

These words would turn out to be prophetic as the Society faced the decade to come, a decade which would include a challenging, world-changing event that forced us to re-think the museum experience. 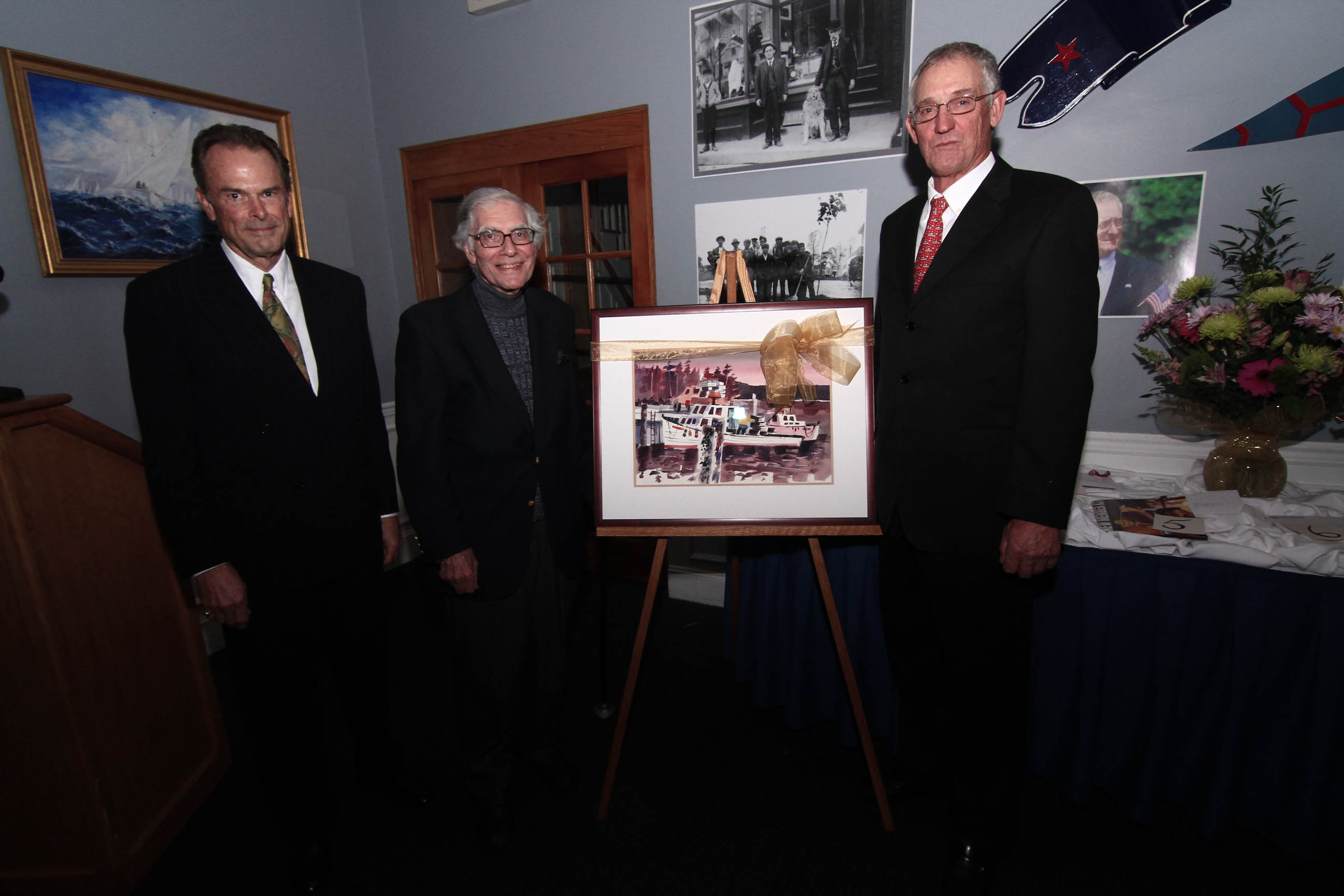 Past Board President, Steven King, Past Trustee Ward Hooper and Ex-Mayor George Doll

To be continued next month…