When word got out that another Victorian home was to be razed and a flat roofed, cinderblock A&P was to be erected on the corner of Main Street and Norwood Avenue, Marilyn Campbell was so upset, she couldn’t sleep at night. She sent a telegram to the chairman of A&P, threatening a boycott of the store and signed herself as President of the Northport Historical Society. 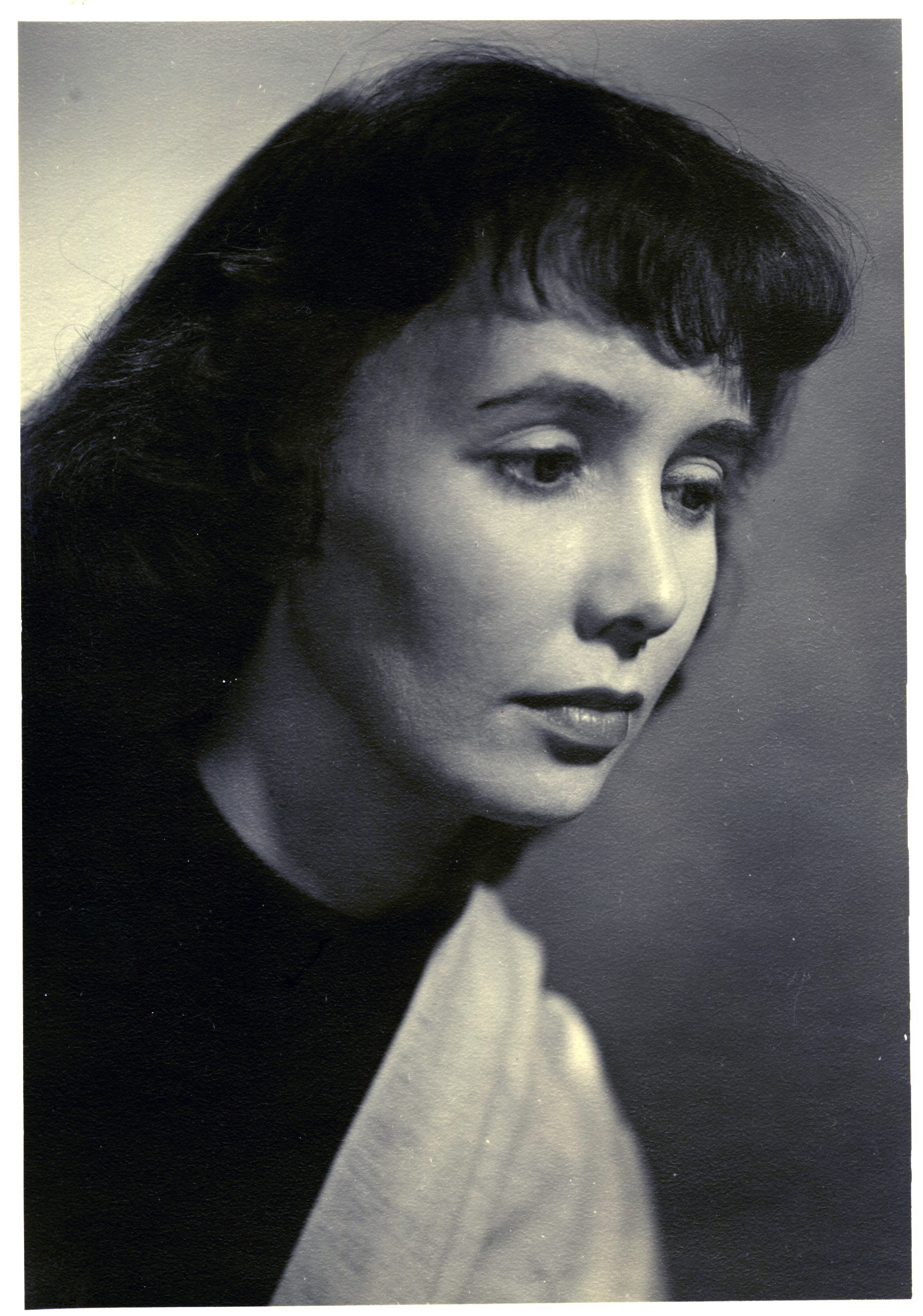 “I had to do something,” explained Campbell to her friend Marilyn Arndt, whom she had called shortly after, trying to justify her fabrication.

“Don’t worry. If you can do some good, fine,” her friend told her reassuringly.

A&P officials responded immediately, requesting a meeting to present new building plans. Marilyn Campbell and another friend, Connie Zillian, met with the company’s representatives at Campbell’s home. They reviewed the new plans and approved them as they were more in keeping with the area’s aesthetics. The building would have a brick façade, and a pitched roof topped with a cupola that would give it a colonial look.

The A&P on the corner of Main Street and Norwood Avenue, now the Visiting Nurse Service

The women had succeeded but Marilyn felt obligated to back up her words. Along with Marilyn Arndt, and Connie Zillian, she called on more friends, Dorothy Davis, Amy and Mary Bialla, and Mary Meyer to join the Northport Historical Society.

The first public meeting of the Society was held on May 18, 1962, in Village Hall. Ray Lott, Huntington Township Historian was the guest speaker. In a subsequent meeting on July 5, 1962, also in Village Hall, it was stated that the purpose of the Society was as follows: “to mark historical buildings; to encourage interest and pride in the Village and residents’ homes over 100 years old, placing circa signs on homes over 100 years old; to find quarters for the Society in which to keep its records and treasures from the past; and to arrange and sponsor tours of historic sites and homes.” 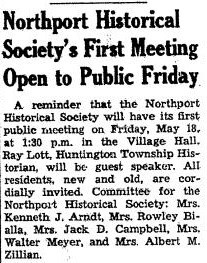 Roy Lott spoke again, and the Honorable Richard W. Hawkins told interesting stories from the past and read a poem which invoked old family names from the area. Mary Meyer requested that residents donate old pictures, letters, or any documents of value to the Society.

The Society began picking up steam in 1963. Membership grew to include Cynthia Quackenbush Hendrie, Thomas Porteus, Niren Pope, and Carol Daugherty. They decided to draft a constitution and by-laws, created a mission statement, and elected officers. Marilyn Campbell was chosen president, Cynthia Quackenbush Hendrie as vice president, Dorothy Davis as secretary, and Thomas Porteus as treasurer.

1963 Statement of Purpose: The Northport Historical Society’s purpose is to collect, preserve, and memorialize by publication and otherwise, the history of the Village of Northport.”

The first official attempt by the Society to save an historical building came soon afterwards, when they tried to save the old Presbyterian Church building on Woodbine Avenue which was originally built in 1794 in Fresh Pond area before being re-located. The Society drew up renderings and suggested the building could be restored and used as a community center…and possibly a museum. Their attempt failed and the church was razed, however, the Society had made a name for themselves. 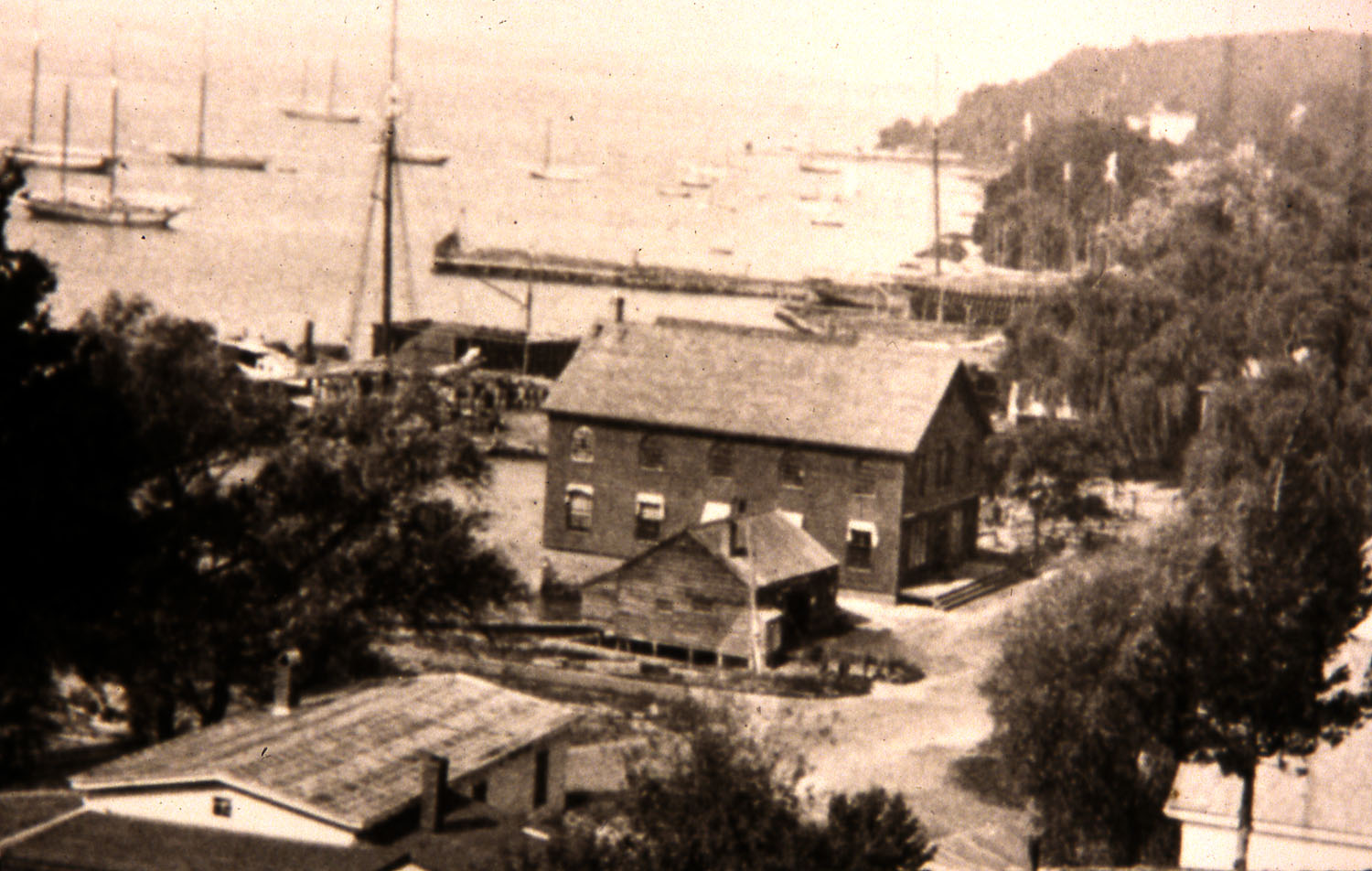 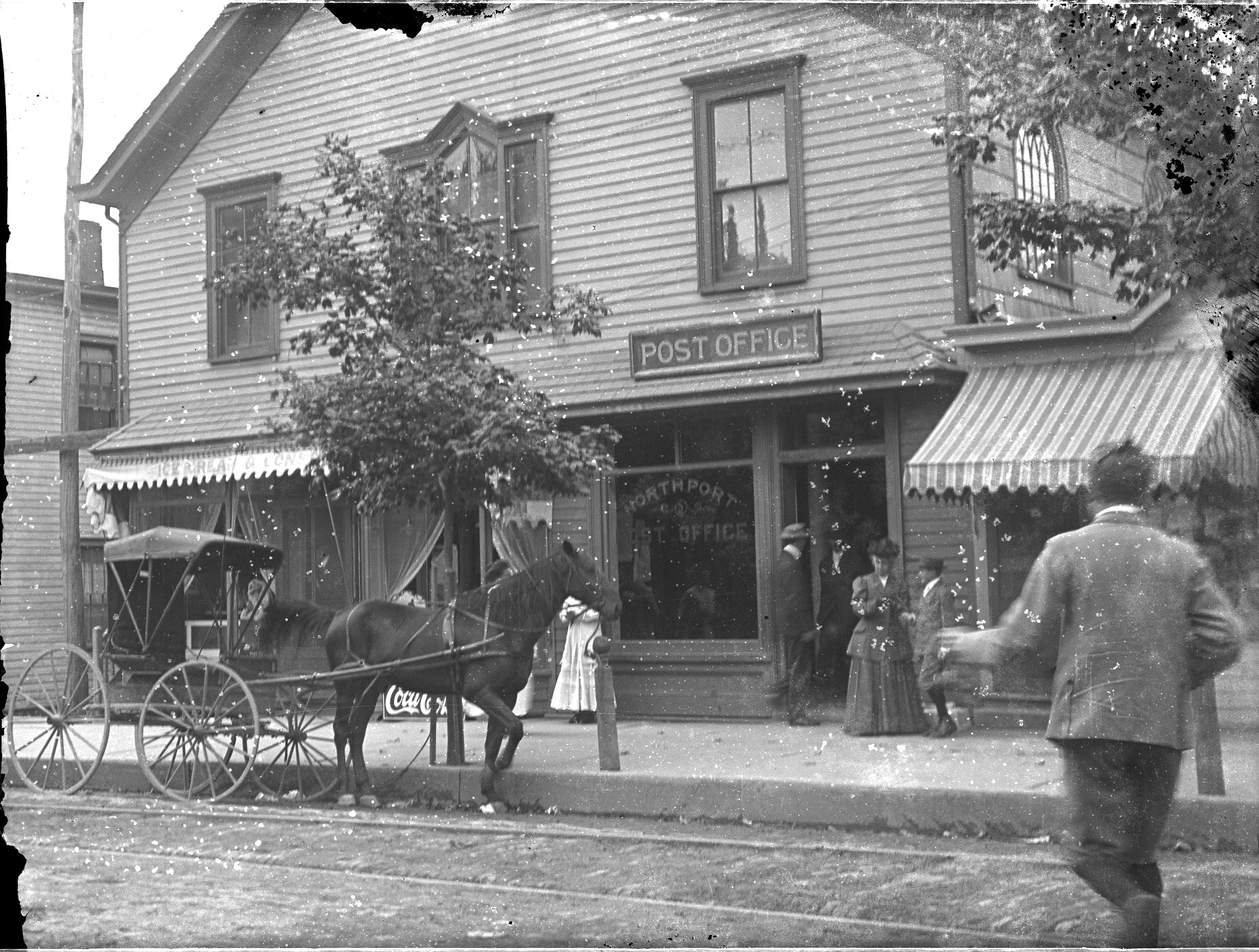 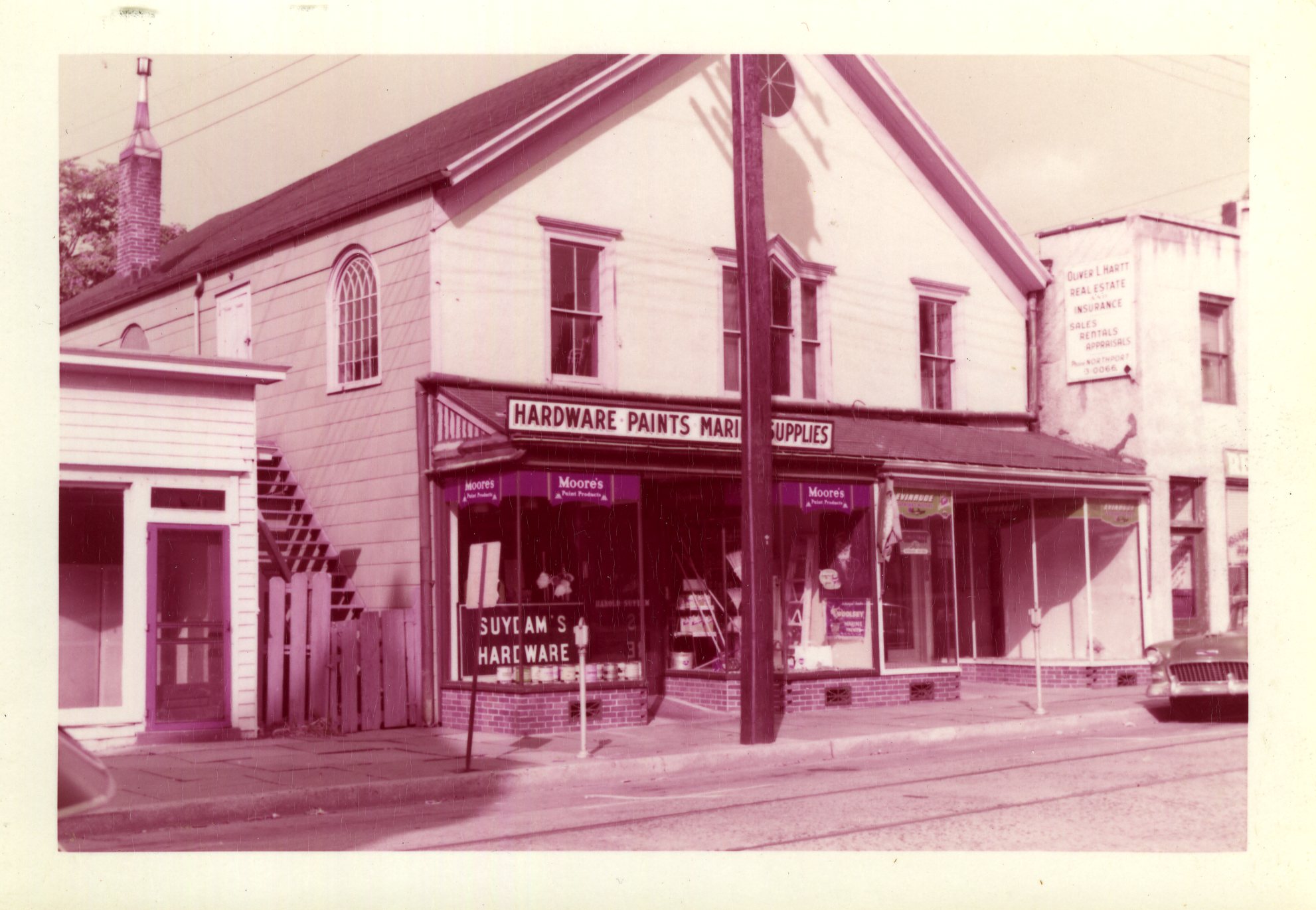 The old Presbyterian Church through the years

Barn dances, antique shows, picnic suppers, and trips to historic sites filled the calendar for the next year, all the while adding members, raising money, and collecting important artifacts in hopes of one day finding a permanent home. Some of Northport’s oldest families had begun donating items such as ship building tools, Victorian clothing, photographs, diaries, and maps. One major collection of early Northport documents, including deeds, receipts, and logbooks came from the Estate of Jesse Carll, esteemed ship builder, and another from the Estate of Calvin Van Pelt, Village Clerk for 35 years. These items were held at members homes and at the Northport Public Library.

In January of 1965, Cynthia Quackenbush Hendrie, who had succeeded Marilyn Campbell as president, asked her attorney husband, Jonathan, to file a charter application with the New York State Department of Education. The charter was granted in the Fall of 1966.

Two years later, in 1968, the Northport Public Library moved into its new location on Laurel Avenue and control of the old “Carnegie Library” building at 215 Main Street reverted to the school district. Cynthia and other members of the Society began eyeing the building as a possible permanent home for the growing collection of artifacts. 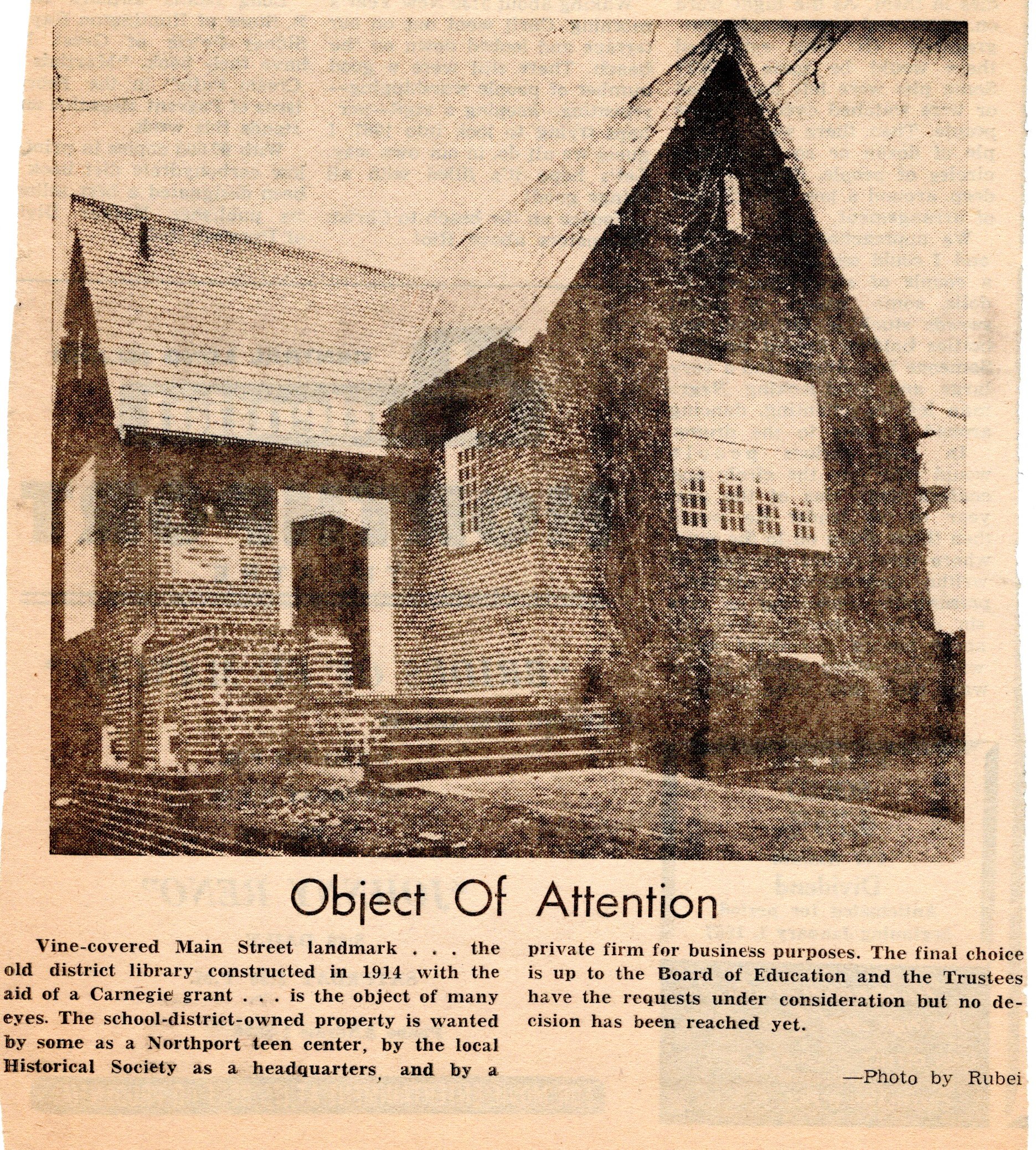 Grace Taylor was the next woman to serve as president and in 1970 hosted the annual meeting at her home on Scudder Avenue. She announced that membership had grown to more than 100 members. Henrietta Van Siclen, the treasurer, reported annual receipts over $2,000. In June, the first historic house marker was placed at 52 Bayview Avenue, once the home of Jesse Carll, c. 1860. The Society was also making their wishes to obtain the old library building known to the community and held several small exhibits there throughout the next several years.