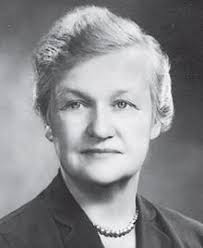 Born a Quaker in Brooklyn, Mary became an educator and civic leader, active in many organizations that promoted social welfare. She was President of the YWCA in 1941 when President Franklin D. Roosevelt sought to unite several service associations into one organization with the goal of lifting morale in the military and on the home front. The heads of the Salvation Army, the YMCA, the YWCA, National Catholic Community Services, National Travelers Aid Assoc., and National Jewish Welfare Board, worked to create the United Service Organizations.

Throughout WWII, the USO proved to be an important part of the war effort, opening clubs all over the world as “homes away from home,” and providing everything from a quiet place to write a letter and get a cup of coffee, to movies, live entertainment, and dances.

In 1946, Mary Shotwell Ingraham was awarded the Presidential Medal for Merit by Harry Truman for her accomplishments, becoming the first woman to receive the honor.

Mary and Henry had four children, Mary Alice, (who became the first woman to serve on the Atomic Energy Commission), Henry G., Winifred, and David. Members of the Ingraham family have helped to preserve the cemetery at Crab Meadow and donated land which became the Henry Ingraham Nature Preserve.