In Honor of Memorial Day 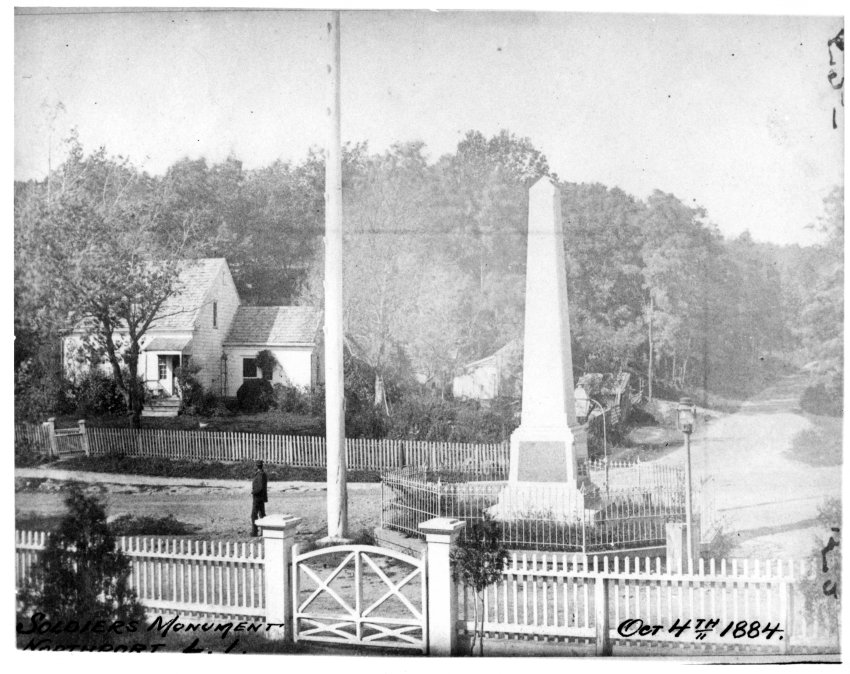 The Civil War monument at the corner of Church and Main Streets, looking toward Ocean Avenue, 1884.

Northport's Main Street is home to several monuments in memory of those who lost their lives serving our country. The oldest memorial is the granite obelisk standing at the corner of Main and Church Streets. Erected on July 4th, 1880, it honors the sixteen Civil War soldiers and sailors from Northport who perished.

This Memorial Day weekend, let's take a closer look at the obelisk and the "Monuments Men" it honors.

After the Civil War ended in 1868, an organization of young ladies, led by Miss Anna Hart, raised an impressive $1,200 to build a monument to those men who were killed in the Civil War. The funds were raised through public entertainments, fairs, festivals, and subscriptions.

Israel Carll donated a plot of land from his farm on Main Street, at the intersection of Church Street, where the 20-foot granite obelisk stands today.

The monument was unveiled July 4, 1880, at a ceremony of music and speeches attended by 800 visitors.

Francis Sammis was an 18 year old sailor from Northport when he enlisted.  Along with many of his friends and neighbors, he joined the 48th Regiment NYS Volunteers, Co. K.  By early September  1861, they were mustered nearby in Fort Hamilton, Brooklyn.  At Fort Hamilton, Sammis' new regiment drilled constantly and earned a reputation of being an extremely skilled group.  In 1861, Sammis wrote a letter to his friend, Mortimer J. Fox, who owned a butcher shop on Main Street. 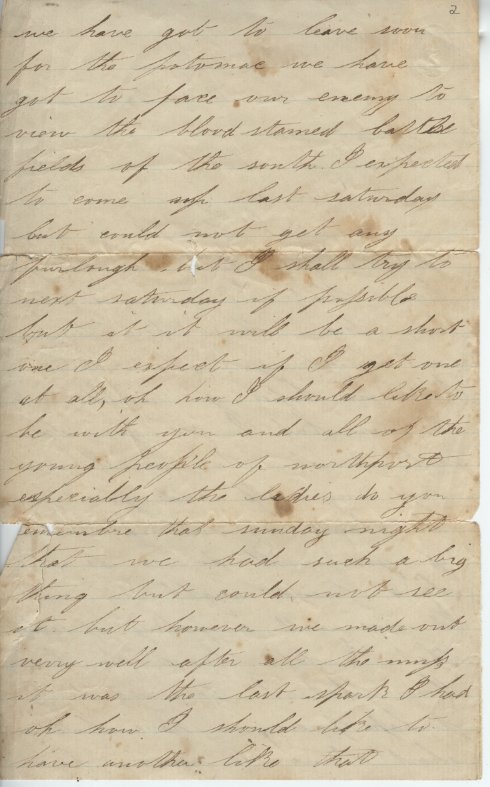 In it he writes: "We have got to leave soon for the Potomac. We have got to face our enemy to view the blood stained battle fields of the South… Oh how I should like to be with all of you and all of the young people of Northport especially the ladies…" 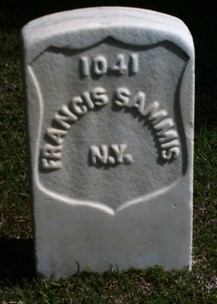 Francis Sammis died of typhoid at the hospital on Hilton Head, South Carolina on December 31, 1861 just a few months after writing that letter to his friend in Northport. 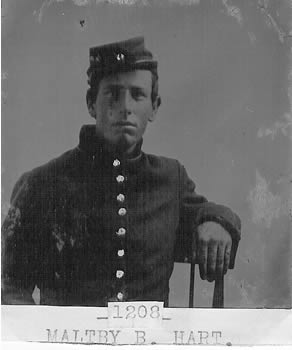 Maltby Burtis Hartt, born in 1843, was the son of Northport shipbuilder Samuel P. Hartt.  Matlby lived at 12 Bayview Avenue and worked as a ship’s carpenter when he enlisted in 1861 at nineteen years old. He mustered in as a private in the 48thRegiment NYS Volunteers, Co. K.   Maltby participated in the Assault on Fort Wagner and was promoted to Corporal. In March of 1864, he was wounded at the Battle of Olustee in Florida.  He recovered and became part of the Color Guard. On June 24, 1864, Maltby was killed in the trenches during the Siege of Petersburg.

Born in 1836, Israel Bunce was the son of Captain Selah Bunce and Susan Higbee Udell.  He worked as a seaman and in November of 1861, at the age of 25, he enlisted as a mate in the Union Navy.
He was assigned as the Acting Masters Mate on the mortar schooner Arletta, under the command of Northport’s Thomas E. Smith.  The Arletta was part of the West Gulf Blockading Squadron and later helped in the bombardment of Forts Philip and Jackson, aiding in the capture of New Orleans.  The Arletta also participated in the siege of Vicksburg in June of 1862. 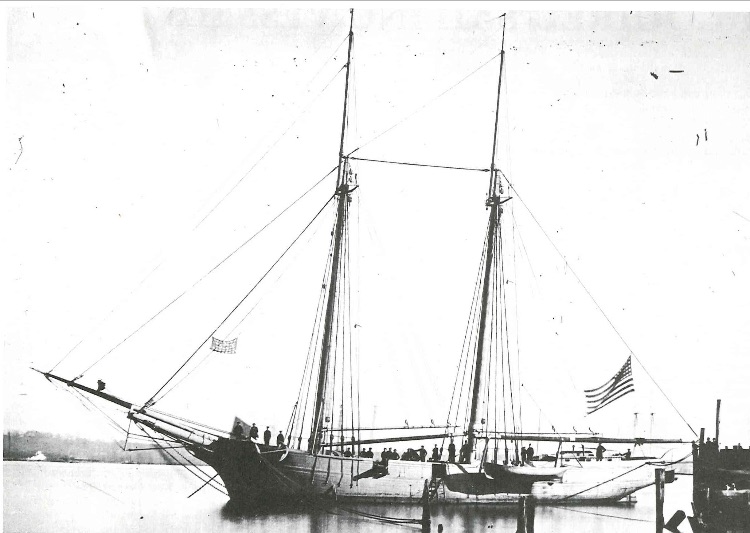 An unknown mortar schooner, typical of the type used in the Civil War. Note the mortar between the masts (Wiki Commons)

Sometime at the end of October 1862, now an Ensign, Israel Bunce was ordered to Cuba to bring back a prize of the war ship, the Betsey Williams.  Little did he know of the fate that awaited him. Bunce came aboard the ship to take command, and three days later fell ill.  On November 1, 1862, Israel Bunce died of blue vitriol (sulphate of copper) poisoning which had been rubbed onto his wine glass.

On June 7, 1863, John M. Griffen stood before the Supreme Court of New York, accused of poisoning three captains in succession as they tried to take command of the Betsey Williams. Testimony given by Thomas Lee, the ship's cook, stated that Griffen told him: ‘There are two captains gone the road they will never return. The damned fool had no business to come on the ship. It belongs to me."  Upon Bunce’s arrival Griffen stated: ‘Here comes another damned Navy man…He will not be here many days."  After nearly 12 hours of deliberation, the jury could not agree and he was discharged by the court. 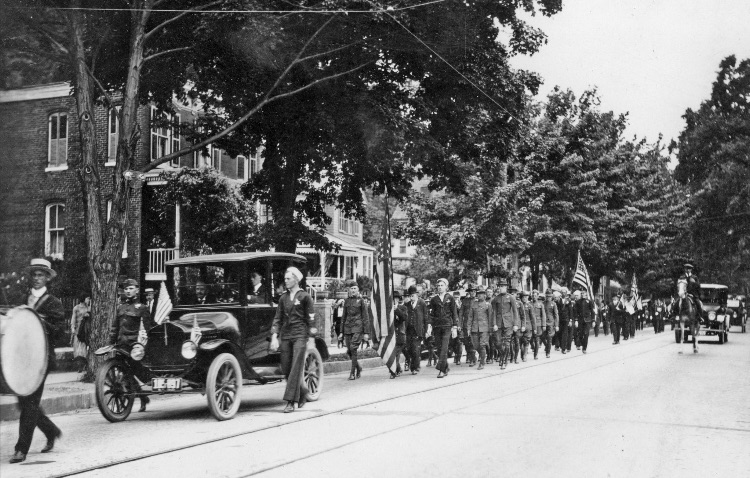 A Memorial Day parade down Main Street in 1921

Even though, for a second year, there will be no Memorial Day parade in Northport, the Society is proud to honor the men and women of our community who so bravely served our country.

We extend our sincere condolences to the families who have lost loved ones during battle, and we remember with heartfelt appreciation, those who answered the call and made the ultimate sacrifice while defending the United States of America. 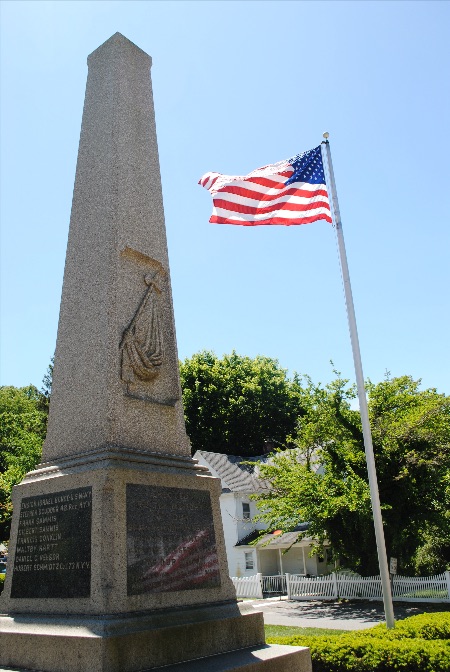