This is the story of how our community came together in the face of fear and devastation during the year after the September 11th attacks. 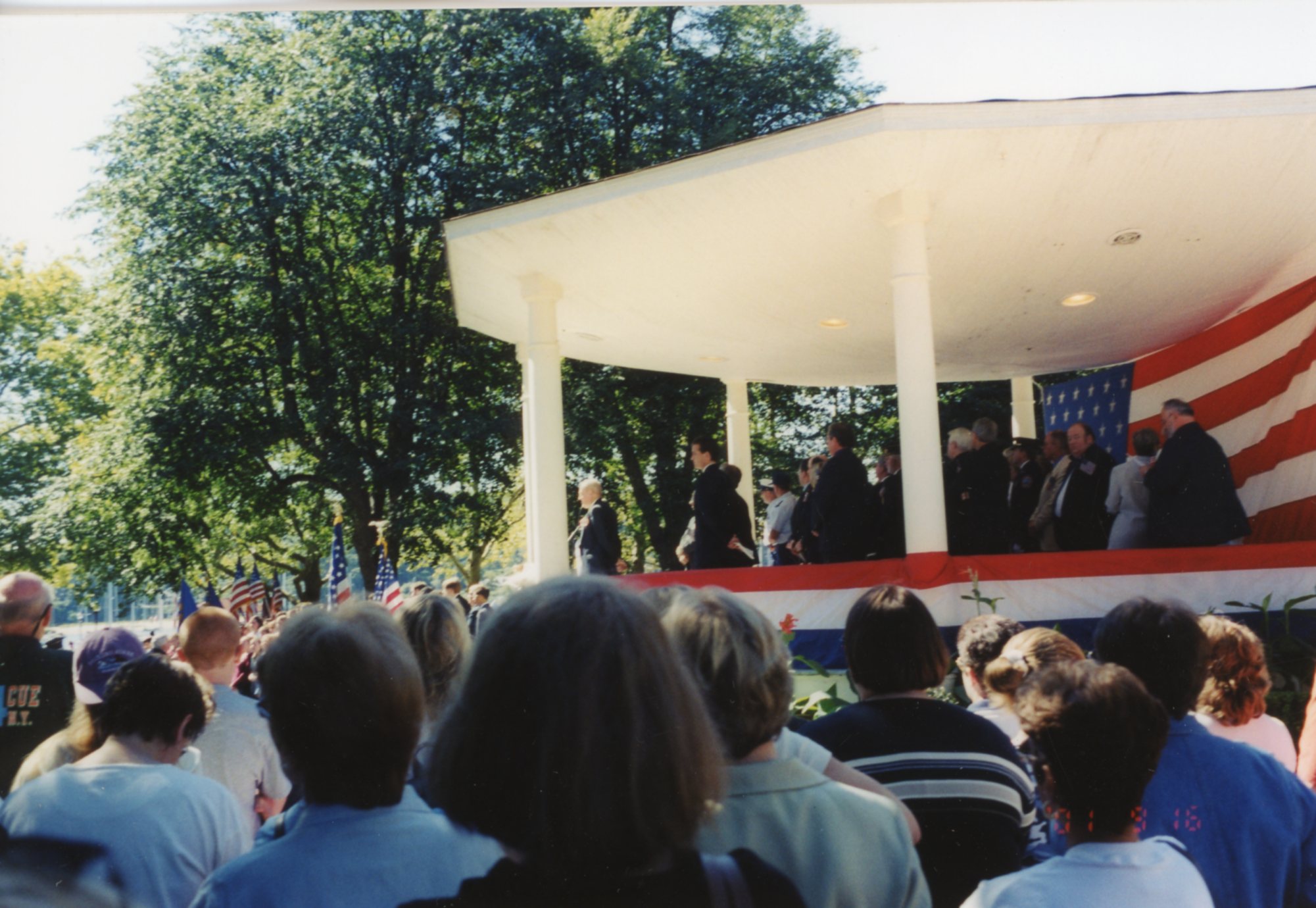 A view of local officials and mourners gathered in Northport Park on September 16th, 2001.

On Tuesday, September 11th, 2001, the people of Northport started their day as they normally did. People boarded trains from the Northport station, many heading into Manhattan. Members of the Great Cow Harbor 10k Race Committee and Cow Harbor Day Committee worked to finish preparations for the race and parade scheduled for the weekend of September 15th. Children at the Northport-East Northport schools walked blearily into classrooms and waited longingly for the Rosh Hashanah holiday seven days away.

The stories of the brave men and women who worked to save lives that day, and who risked their health and safety in the months to come rebuilding New York City, should be told always to ensure they are never forgotten. This is the story of how our community came together in the face of fear and devastation during the year after the September 11th attacks. 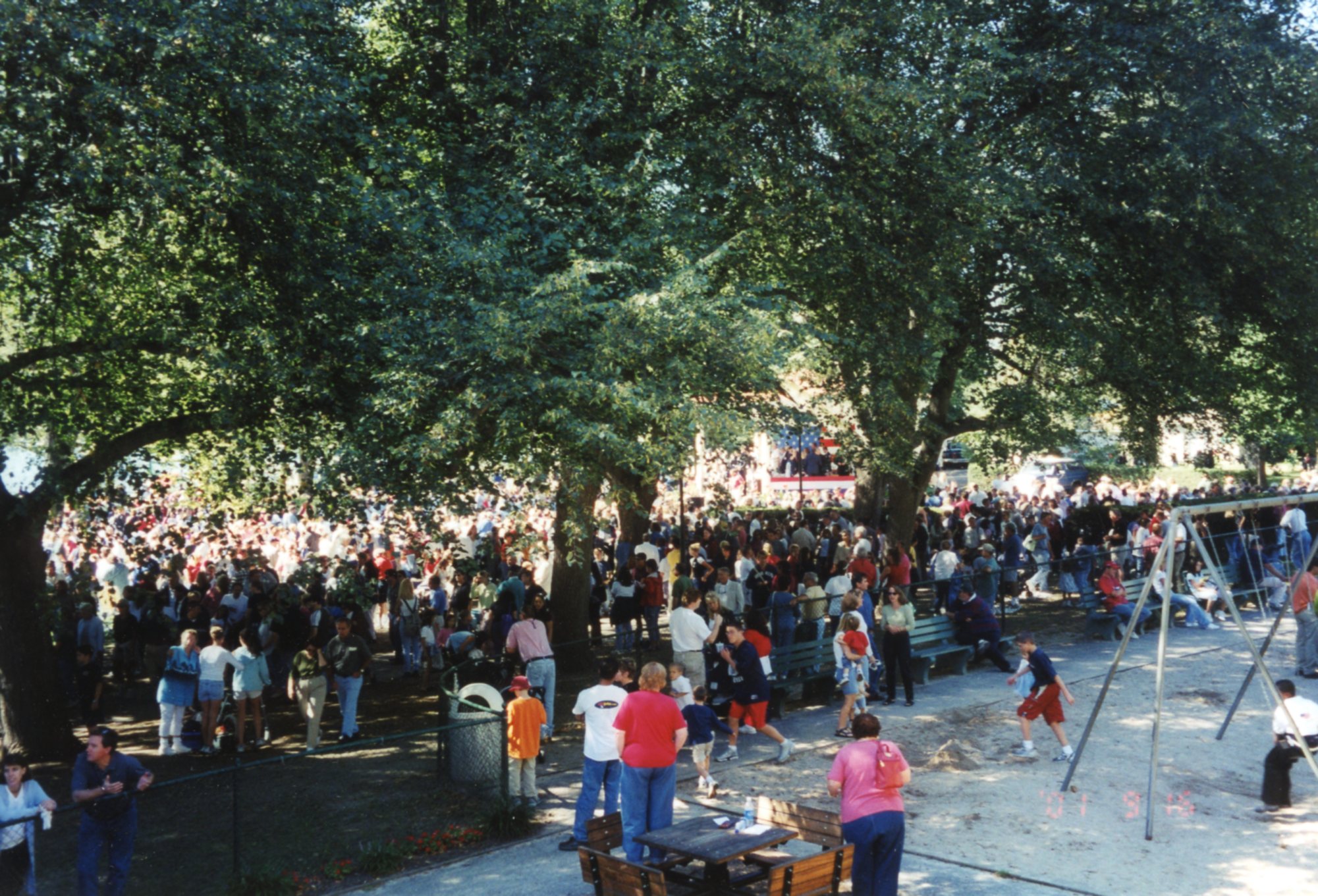 Very quickly, the Cow Harbor Race Committee and Village of Northport agreed to donate all money that had been collected for the race to the Red Cross and Special Olympics, with other money donated by local businesses refunded. These were people of action; they could not sit still even while they mourned. The Cow Harbor Day and Cow Harbor Race committees jointly organized a memorial service in Northport Park on September 16th in place of the Cow Harbor Day festivities. A crowd of nearly 5,000 people stood together as officials like Asharoken Mayor William Kelley, School Superintendent William Brosnan, and Congressman Steve Israel spoke, and Father Peter Garry of St. Philip Neri offered comforting prayers. The Northport High School Choir performed a moving rendition of “God Bless America” leaving many in tears. 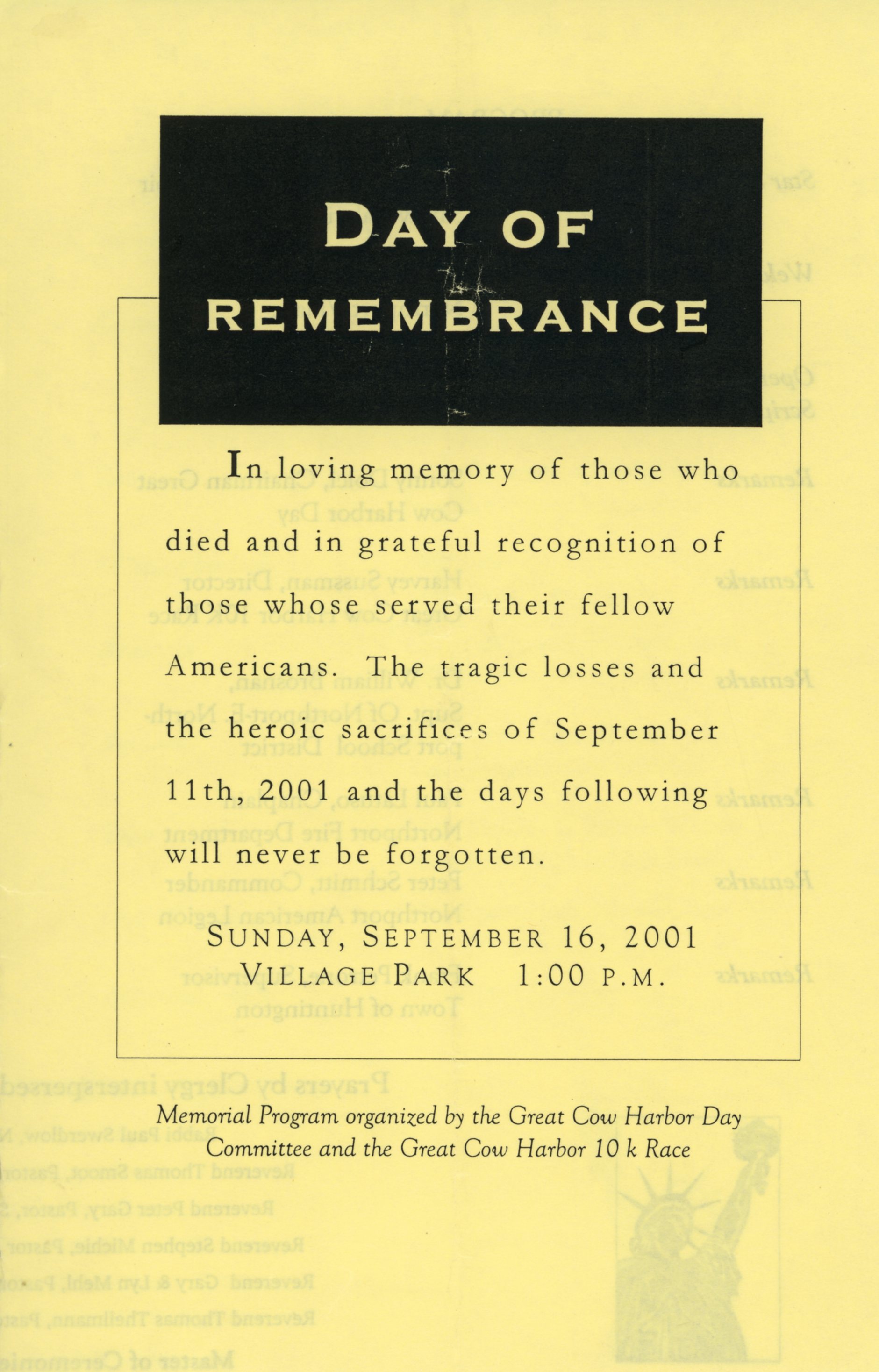 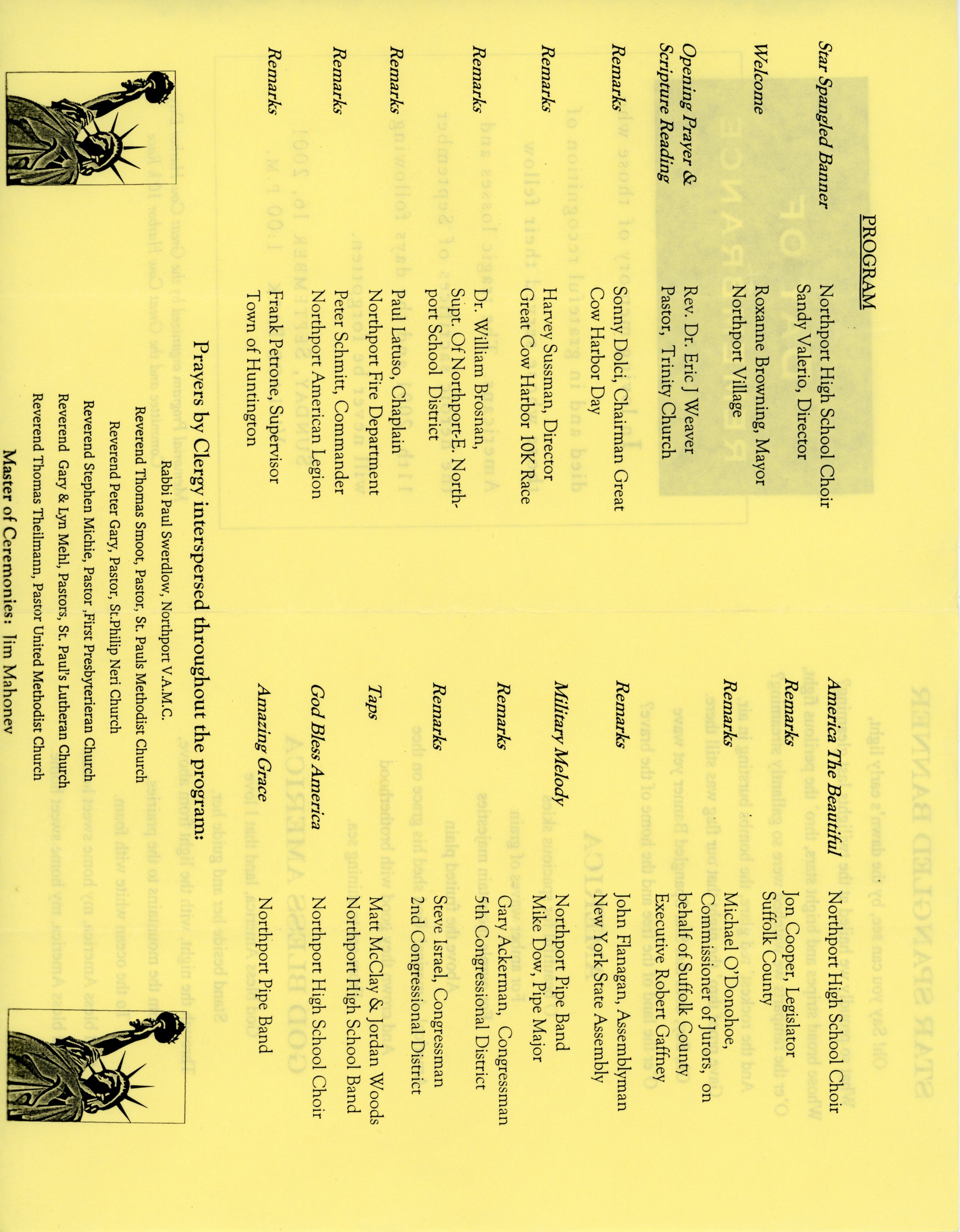 On September 27, a group of community members met up at Smitty's (now Sweet Mama's on 25A) to discuss creating a group to support the families of those lost in the Twin Towers. According to Rob Ingraham, one of the main organizers, twenty-six people were in attendance including Carla Jennings, Pat Irving, Bill & Barbara Raisch, Steve & Pete Hayes, Chuck Adams, Larry Beck, Sonny Dolci, Jim McKenna, Gerri Daly, Ray McGuinness, Sue Newton, Steve Hubbard, Roxanne Browning, Kathy & Tom Ferrara, Ron Iannacone, and others. Out of this meeting the Northport-East Northport WTC Neighborhood Fund was born. News that the group was raising money for the families passed by word of mouth; over 100 individuals, village politicians, police officers, and teachers donated their time and resources to support the families. Volunteers worked on three different sub-committees as family liaisons, service providers, or fundraisers. The liaisons were chosen to communicate with the families and assess their needs. The Neighborhood Fund then asked for donations of money and services from the community. Lewisy Oil offered to donate 100% of proceeds from propane tank refills. East Northport Dentist, Ray Mascolo, donated sales from a shirt he designed with the words “New York City’s Twin Towers of Courage.” The Mother Center held multiple events with donations going to the fund, and hundreds of people donated their own money to help the families. The WTC Neighborhood Fund’s activities reached a high point on Sunday, November 18th when the Fund held a huge fund-raising event featuring a performance and dancing by Broadway star and Northport native, Patti LuPone, at Larkfield Manor. About 350 people attended and made their donations by bidding for items in a live auction and a raffle sale. According to the Fund Committee, they raised over $50,000 that was split evenly between the affected families.

It was hard enough for adults to wrap their heads around the national tragedy. It is a testament to the resilience of children that local students quickly found ways to contribute while dealing with their emotions in the wake of the attacks. When Superintendent Brosnan spoke at the September 16th memorial service, he complimented students on how quickly they had put up encouraging banners and started fundraising efforts for victims of the attack. Over the course of the following year there were many such fundraisers. In September, Northport Middle School home and careers classes baked over 1,000 brownies and sent the money to the Red Cross, and Norwood Avenue PTA held a relief drive. Students at Bellerose Avenue Elementary also held a fundraiser, while high school students collected socks for rescue workers.

By February 2002, students, and teachers at Northport High School, headed by history teacher Joe Burton, began the creation of the Wall of Heroes. On a large set of walls in a busy intersection of hallways, members of the school community began the long process of writing alphabetically the names of 3,057 people who lost their lives in the attacks. Over 300 people took the time to help complete the project. The names of local Northport-East Northport residents were written in blue, rescue workers, firefighters, police and EMTs in red, everyone else in black. Burton reached out to the community offering to let anyone affected to participate. Beth Murphy wrote her husband Kevin’s name herself. The Wall of Heroes can still be seen today in the H-Wing corridor and is looked upon by hundreds of Northport High School students every day of the school year.

The world had changed. The world was the same. People went back to work. Holidays were celebrated as usual, though all were tinged with a weight they hadn’t carried in years past. The Cow Harbor race and parade committees gathered and planned their respective activities. As the one-year anniversary of the attacks approached, a number of community groups commemorated the losses suffered. The Northport Little League participated in the national Hometown Heroes Day at Steers Park to honor Dan Smith and Dan Trant, who had both volunteered for the league. At the heart of the Village, the congregation of St. Philip Neri dedicated the new Dan Trant Recreational Center in honor of his contribution as a CYO basketball coach. The gymnasium was part of their recently begun renovation of the old school building into a new parish center. The Northport Library head of communication services curated a show entitled “Reflections and Remembrance” that ran throughout the month of September. It showcased the works of local artists, young and old, who wished to express their feelings or express their opinions after the tragedy. These included a piece by Gerry Klein, who at the time was a flight attendant for American Airlines and flew on September 10th.

The Cow Harbor Day Committee planned a parade, and more. Members of the committee announced in July 2002 that they were creating a monument, consisting of a plaque mounted on a rock, dedicated to eight of the local victims. The U.S. Marine Corps Band was engaged to perform during the memorial ceremony on September 28th when the monument was unveiled at its spot at the entrance to Village Park, in front of the evergreen tree. 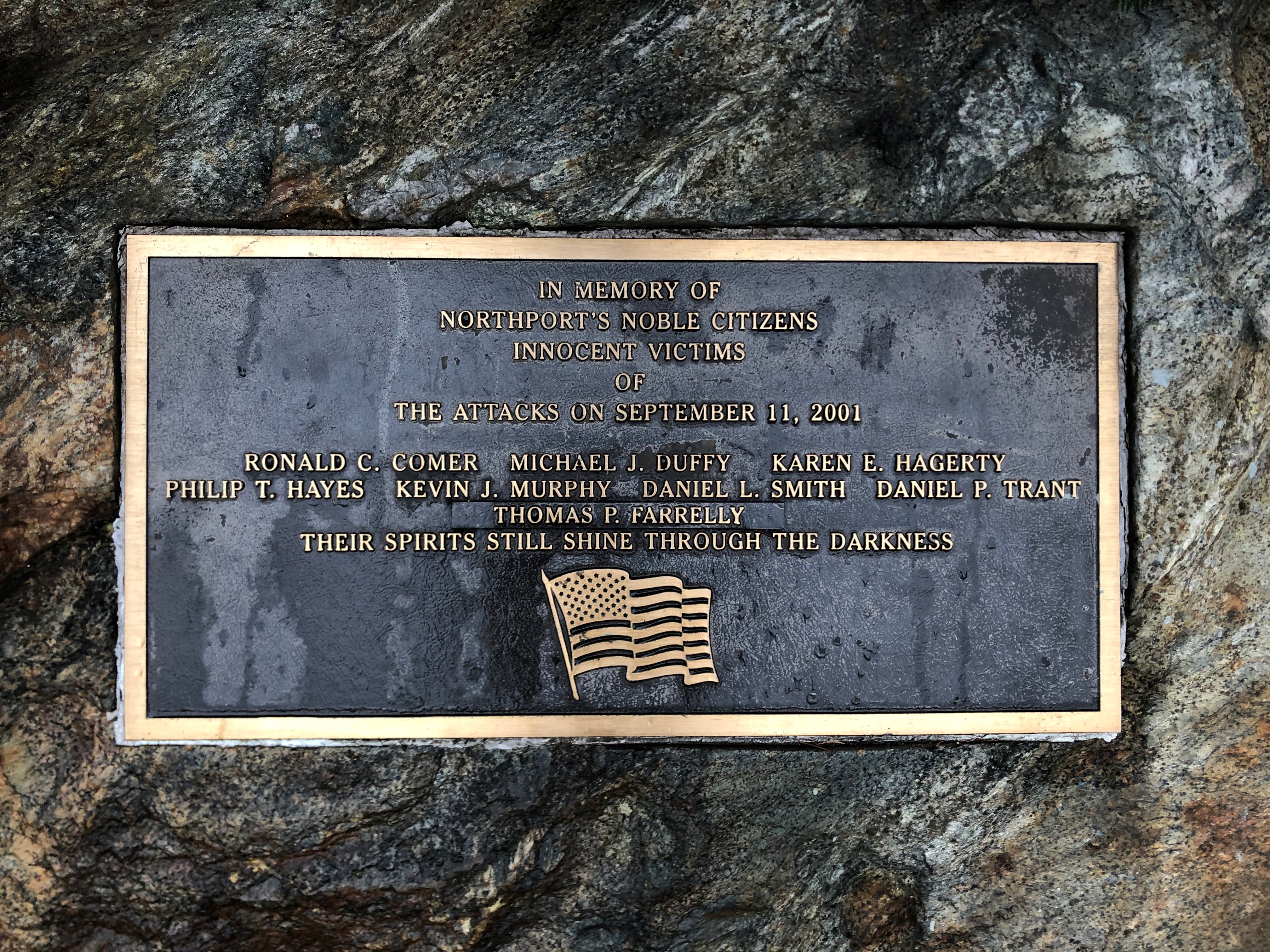 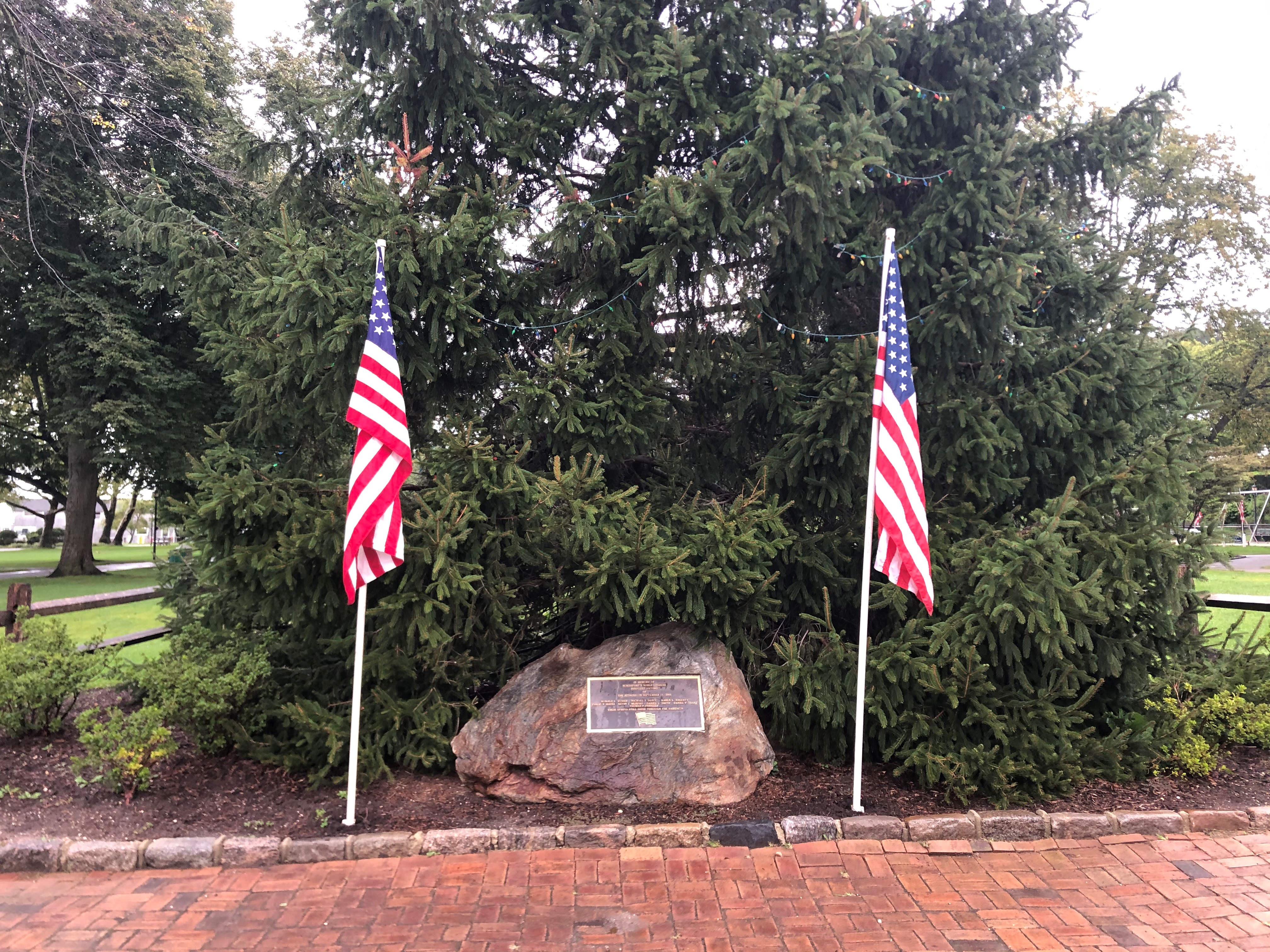 Years later, in 2009, the East Northport Fire Department requested a section of steel recovered from the World Trade Center from the Port Authority of New York City. The request was processed and approved by May 2012, when the ENFD took the eight-foot piece of metal and constructed a simple, powerful monument in front of the main station house. The flower-ringed memorial is a source of solace for community members and fire fighters, and is now the centerpiece of the annual ENFD September 11th Memorial service. 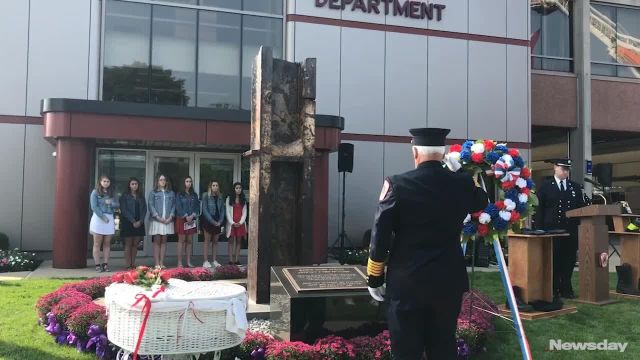 The Northport, East Northport, Fort Salonga, Asharoken, and Eaton’s Neck communities performed miracles to support our community and the larger New York and American community in the year after 9/11. Every year since, the Northport American Legion and the East Northport Fire Department have honored the sacrifices made on that day with their own services. Twenty years on, their commemoration is a solace to those who remember, and a lesson to those who were too young or not born to have known what those days were like.

This year, the Northport Historical Society extends our condolences to those who lost loved ones, and our gratitude to all those who worked to rebuild a stronger New York.