Shirley Geller and the Skidmore Garden

Shirley Geller spent much of her life cultivating beauty. In 1985, she brought new beauty into the world by planting a wild garden in the middle of a pavement parking lot, and saved some Northport history along the way. 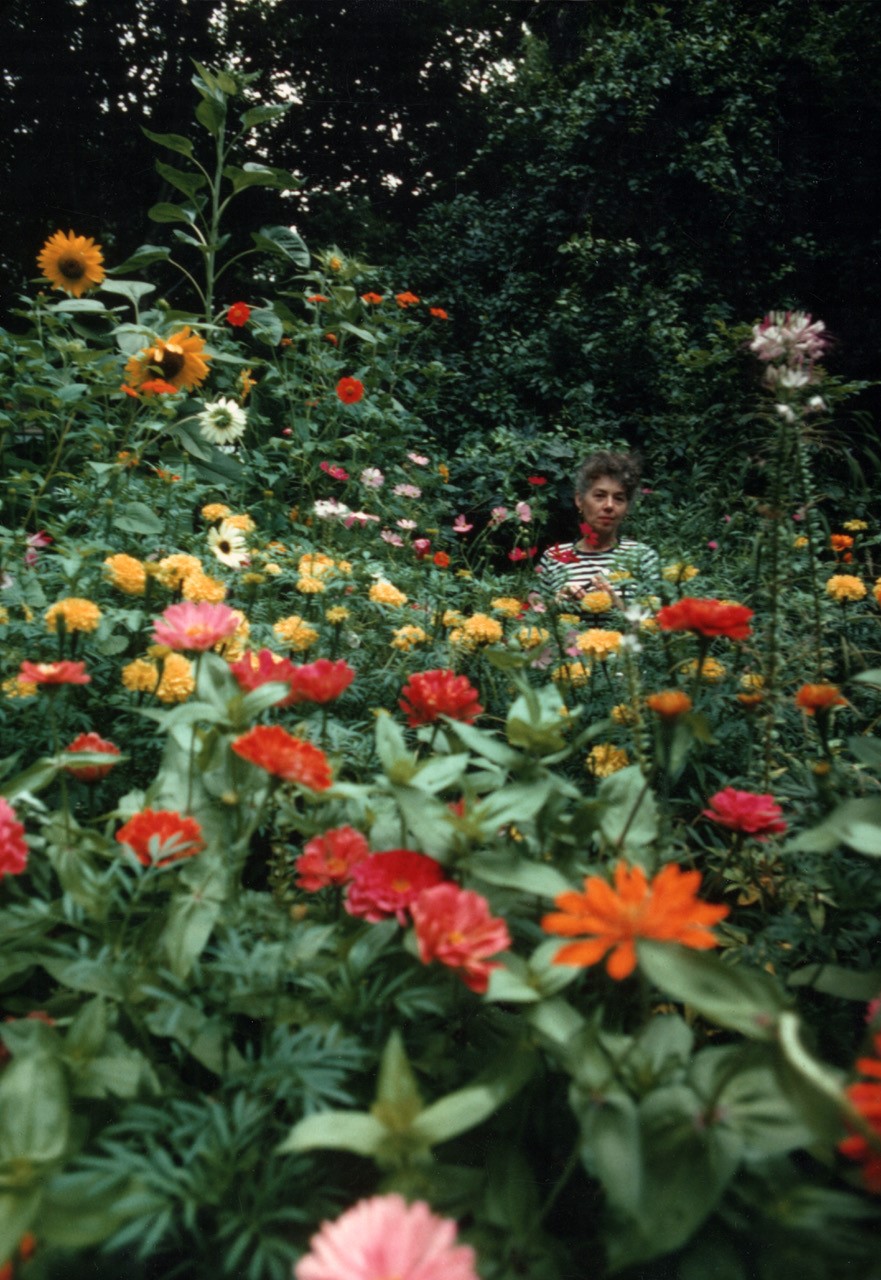 Shirley Geller had always led an artistic life. “It seems like I was born with a paintbrush in my hand,” she told The Observer in a 1979 profile. She studied art at Cooper Union in the 1940s; designed the packaging for the Jujube candy; designed women’s clothing and owned her own ladies clothing boutique; and showed her numerous paintings in respected Long Island galleries. She and her husband, the architect Andrew Geller, moved to Northport in 1951, and by the 1980s she had become a fixture in community life. The Northport Library exhibited many of her creations, from the stuffed animals she designed to her fine oil paintings. Shirley had contracted polio while pregnant with her second child in 1949, but regained use of her limbs and delivered her baby safely. Though she continued to live an active life, crouching for long periods of time caused her pain going forward. Despite this, she was an avid gardener and member of the Northport Garden Club.

In 1984, the 199 Main Street Skidmore House (not to be confused with the 529 Main Street Skidmore House) had been vacant for ten years. It sat back from the road at the end of a long lawn, one of the last large pieces of grass left on the commercial road. Built in the 1850s, the structure’s inherent elegance was lost behind overgrown shrubs, peeling paint and sagging shingles. The Village began to eye the property as increased traffic left visitors with nowhere to park their cars. The fate of 199 Main was brought up in an “informal public conversation” during a Village Board meeting in April 1984. The Village was considering buying the property for demolition. Some trustees argued that the house itself was worthless, beyond repair. Community members countered that the house had been valued at $248,000, not to mention its incalculable historical worth as one of the oldest extant buildings on lower Main Street. Mimi Kail, president of the Northport Village Residents’ Association, was one of the most vocal defenders of the property. Days after this public meeting, it was announced that the Mara Brothers Construction Company had bought the property and was beginning immediate restoration of the Skidmore House. They would negotiate with the Village to develop part of the lawn into the much-needed parking. Local history buffs rejoiced, skeptically. The house wasn’t the only historical feature they were worried about: what would become of its garden? 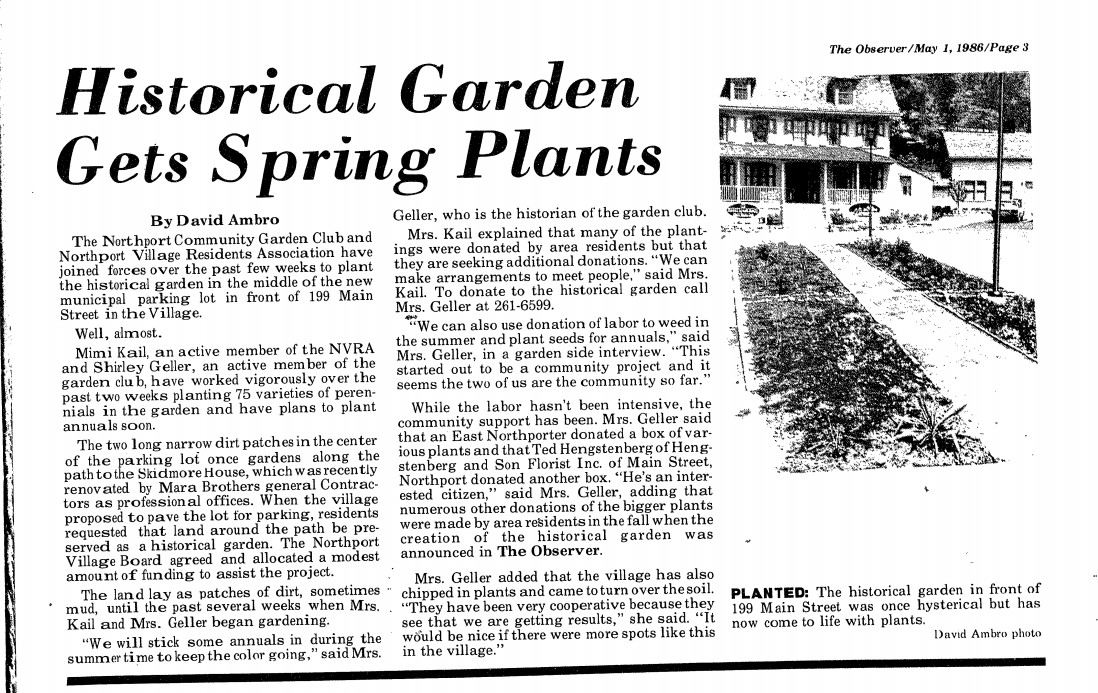 A Bit of Earth

In March 1985, Northport Village Engineer Robert Grant presented a plan for the parking lot that would include a brick walk bordered by azaleas and pachysandras, situated between the Skidmore House and the Main Street sidewalk. Community members were concerned; they were under the impression that more of the lawn and original flower garden would be left untouched. And then, during the week of July 4th, diggers were sent to the Skidmore House and destroyed the garden. Local gardeners, caught with little warning, could only save a small number of clippings from a garden that had thrived for over a century. At this point, the Village sat down with Shirley Geller and Mimi Kail to discuss a way to honor the historical origins of the property within the parking lot. Geller and Kail asked the Village to financially back turning the brick-walk garden into a showcase of flowers that had been in the old Skidmore garden. It was agreed that the border beds would be filled with plants popular between 1800 and 1850, which Geller knew about as the Northport Garden Club historian.

In the spring of 1986, construction of the parking lot was complete, and the red-brick walk was flanked by two rectangles of mud, 70 feet long and 6 feet wide each. Geller and Kail had their work cut out for them. Throughout April and May, they began the long process of planning and planting the perennials of this new garden. Some of the plants were purchases, some were transplants from the original garden, but most were donations from community members. 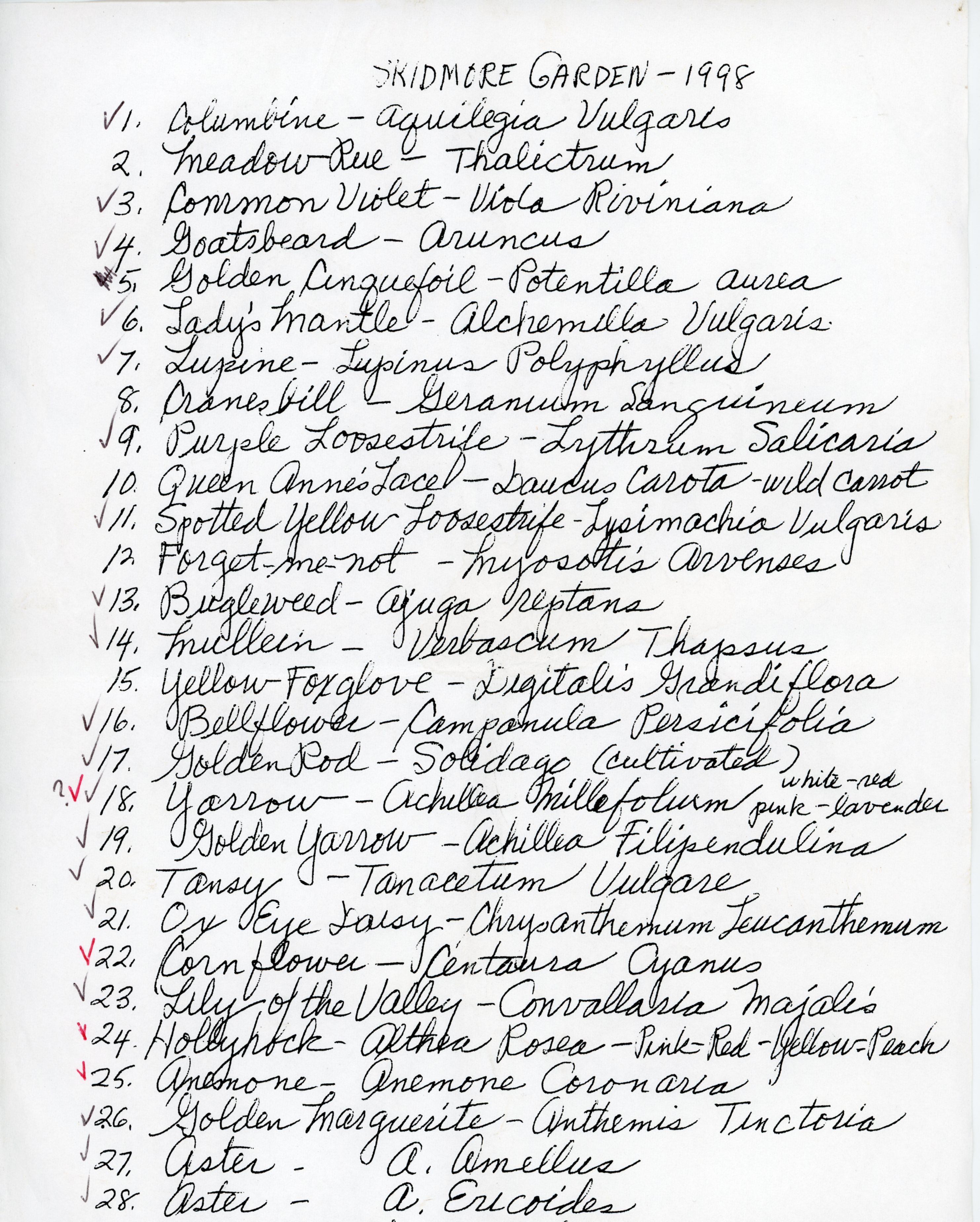 First page of handwritten list of flowers in the Skidmore Garden, written by Shirley Geller. Image courtesy of Sharyn Lorber.

She explained her ethos in garden planning to The Northport Journal in a 1987 profile: inspired by English gardens, she liked hers “to look as if it just happened” and “cover the ground in green.” That being said, one of the current caretakers of the garden, Sharyn Lorber, remembers Shirley as a meticulous custodian. “She would get every blade of grass out of there,” said Lorber in a June 2021 interview with the Northport Historical Society. “There were hardly any weeds when Shirley was alive.” By high summer, the garden was blooming; by the end of the year, it had won a beautification award from the Town of Huntington. The Skidmore Garden finally had a new home.

The Skidmore Garden quickly became a favorite spot for pedestrians on Main Street, beloved for the profusion of tall green shrubs and splashes of bright colored annuals planted by Geller and her volunteers. Her early efforts fighting for the existence of the garden won her awards from the community, including the 1986 Good Neighbor Award by the Northport Village Residents Association, and the 1987 Second Place Merchants Award from the Town Beautification Council, and a third award from the Village Board of Trustees in 1991 to honor her beautifying efforts. In October 1995, a bronze plaque was installed at the head of the garden commemorating Shirley’s work.

The Northport Garden Club eventually dissolved, and the Skidmore Garden really did become Shirley’s garden. She recruited and organized the volunteers to prepare the garden for the winter, plant new batches of annuals in the spring, and pull weeds through the summer. Sometimes she had to advertise in local newspapers for volunteers; other times, she made friends with people walking along the street. Shirley’s neighbors Jimmy and Francis Chung became long-term garden helpers.

Sharyn Lorber remembers seeing Shirley working by herself one day and asking if she could use some help. Fifteen years later, she is still working on the garden. “I learned everything I know about gardens from Shirley,” Lorber says. “When I first started, I was afraid to pull anything out in case it was a real plant and not a weed.” Shirley passed on her knowledge to every amateur who joined the crew, and learned more from accredited Master Gardeners who sometimes joined her team.

As the years passed, Shirley kept busy with her gardening and painting. She, Andrew, and two other local painters, Ward Hooper and Joan Fahey, became a team, spending Sunday afternoons painting and lunching together, then displaying their works together in galleries across the Island throughout the 1990s and 2000s. 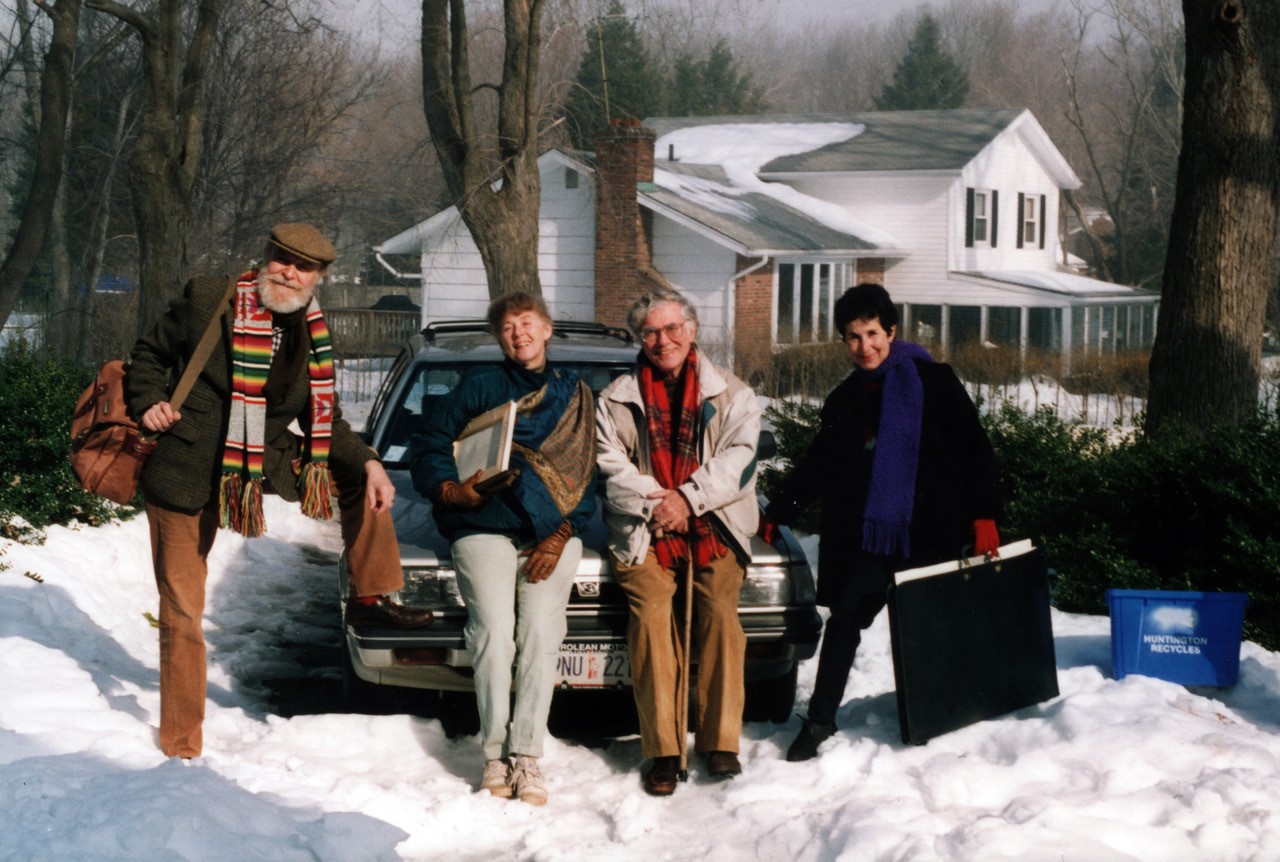 She even continued gardening after having back surgery in 1994. But eventually Shirley’s health declined. In June 2010, Shirley and Andrew moved up to Ithaca to live with their daughter. An advertisement was put in The Times of Northport & East Northport asking for volunteers to step up and care for the garden in her absence. Lorber remembers getting a call from Shirley before she left Northport asking Lorber to make sure the garden continued in her absence. “She was a very strong woman,” Lorber says. “This garden meant everything to her.” Shirley Geller passed away in Ithaca that July at 85 years-old. 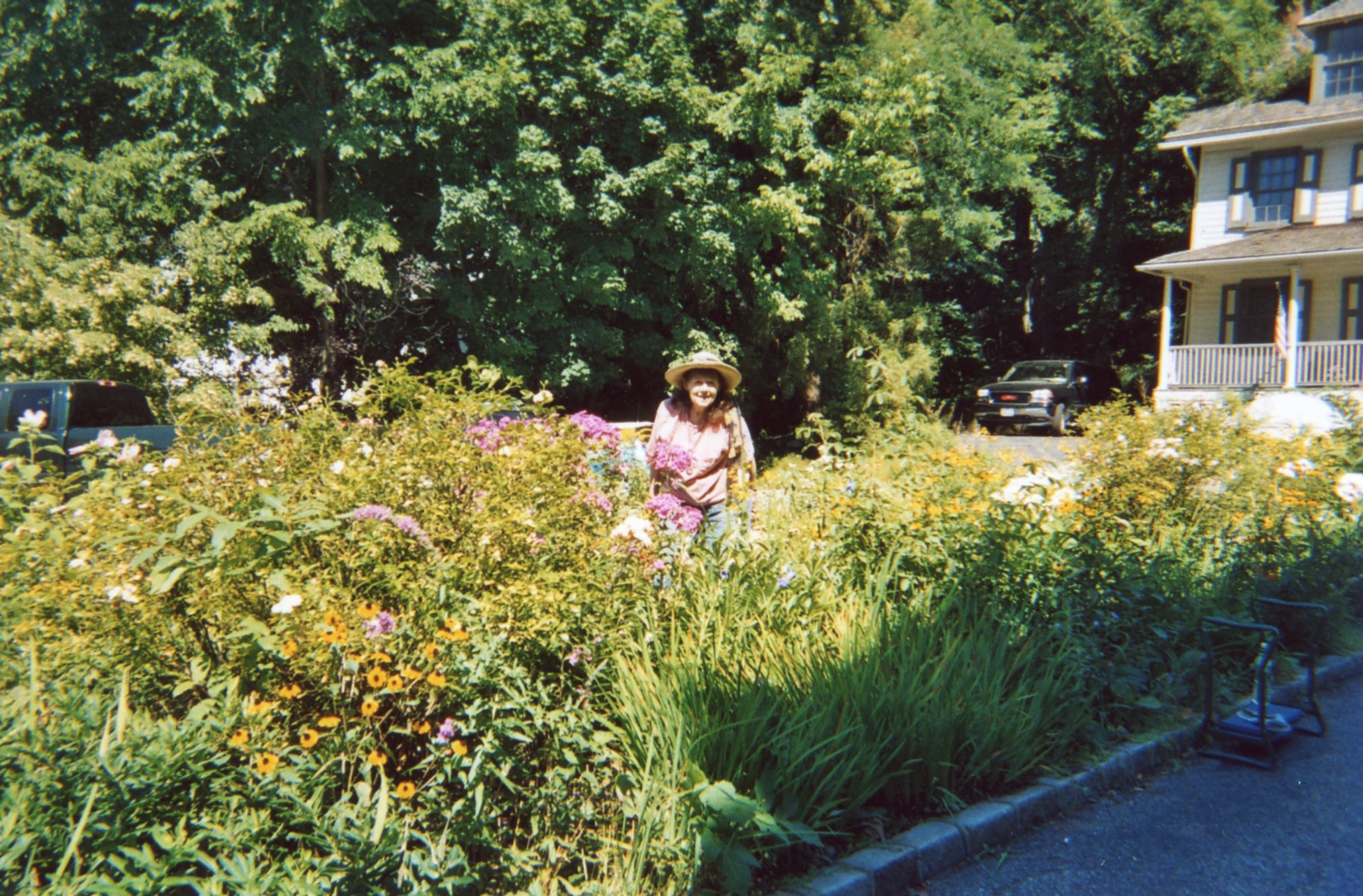 Shirley’s legacy lives on in her garden. Lorber has been taking care of the garden alongside Kathy Fernandez, a member of the Asharoken Garden Club, and a handful of other volunteers. They meet every Wednesday from 9:00am to 11:00am (rain date Thursdays) and are always looking for new volunteers. They have made the garden their own now, planting annuals and some new perennials that are not all strictly historical, but give the garden a new life and bold character. The plaque commemorating Shirley’s garden is still there, facing the Main Street sidewalk to tell future generations that this garden was grown by a woman with vision. 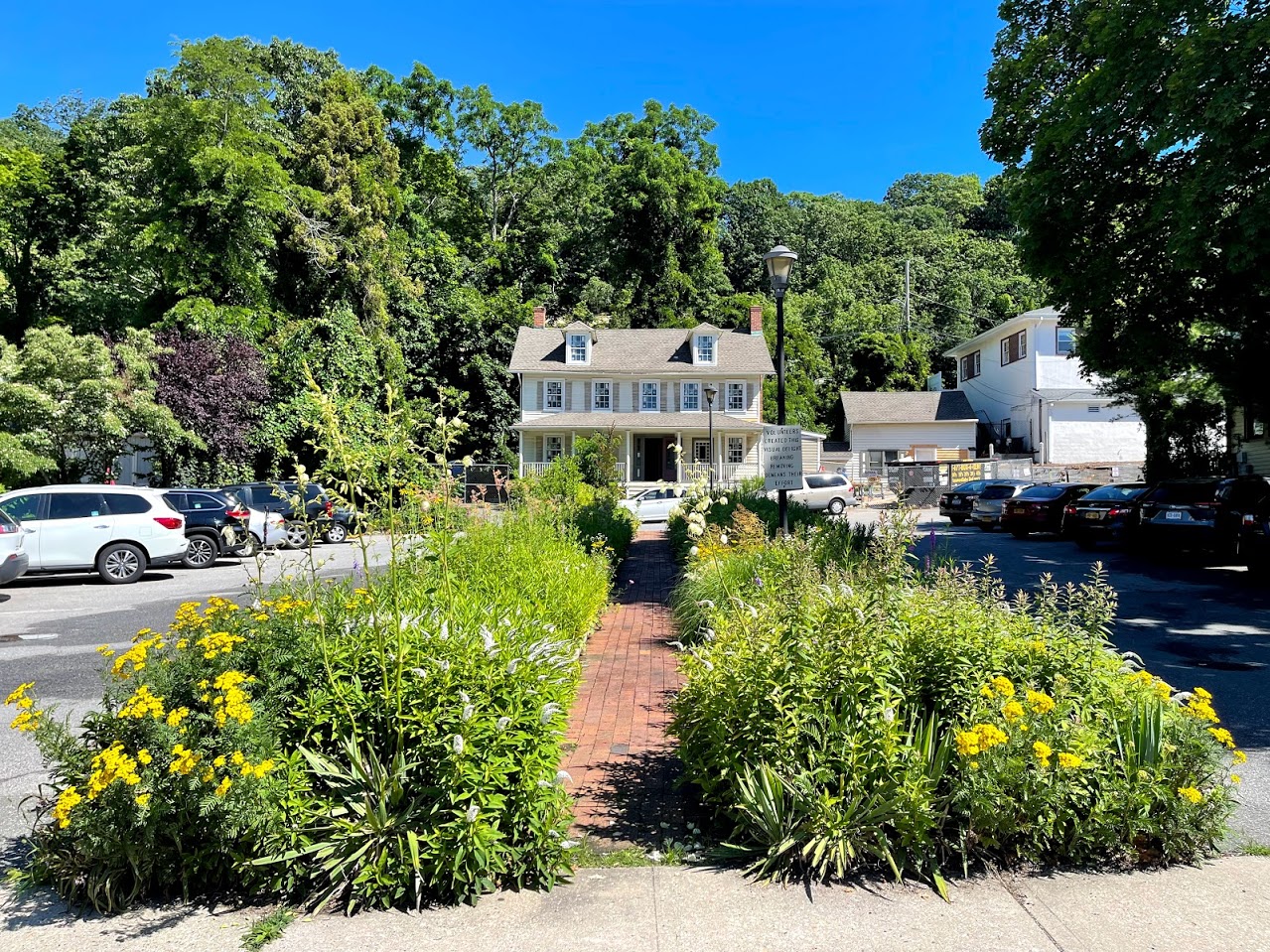 Today, the Skidmore Garden is being renovated by the Northport Historical Society. The garden is still maintained by volunteers, who are always looking for more help.

July is a beautiful time of year for our local gardens. The Northport Historical Society Garden Tour will be held on July 18th from 12PM - 4PM. If you are interested in buying tickets, you can find them on our website: https://www.northporthistorical.org/#event|2021-summer-splendor-garden-tour|521