The Braziers of Northport 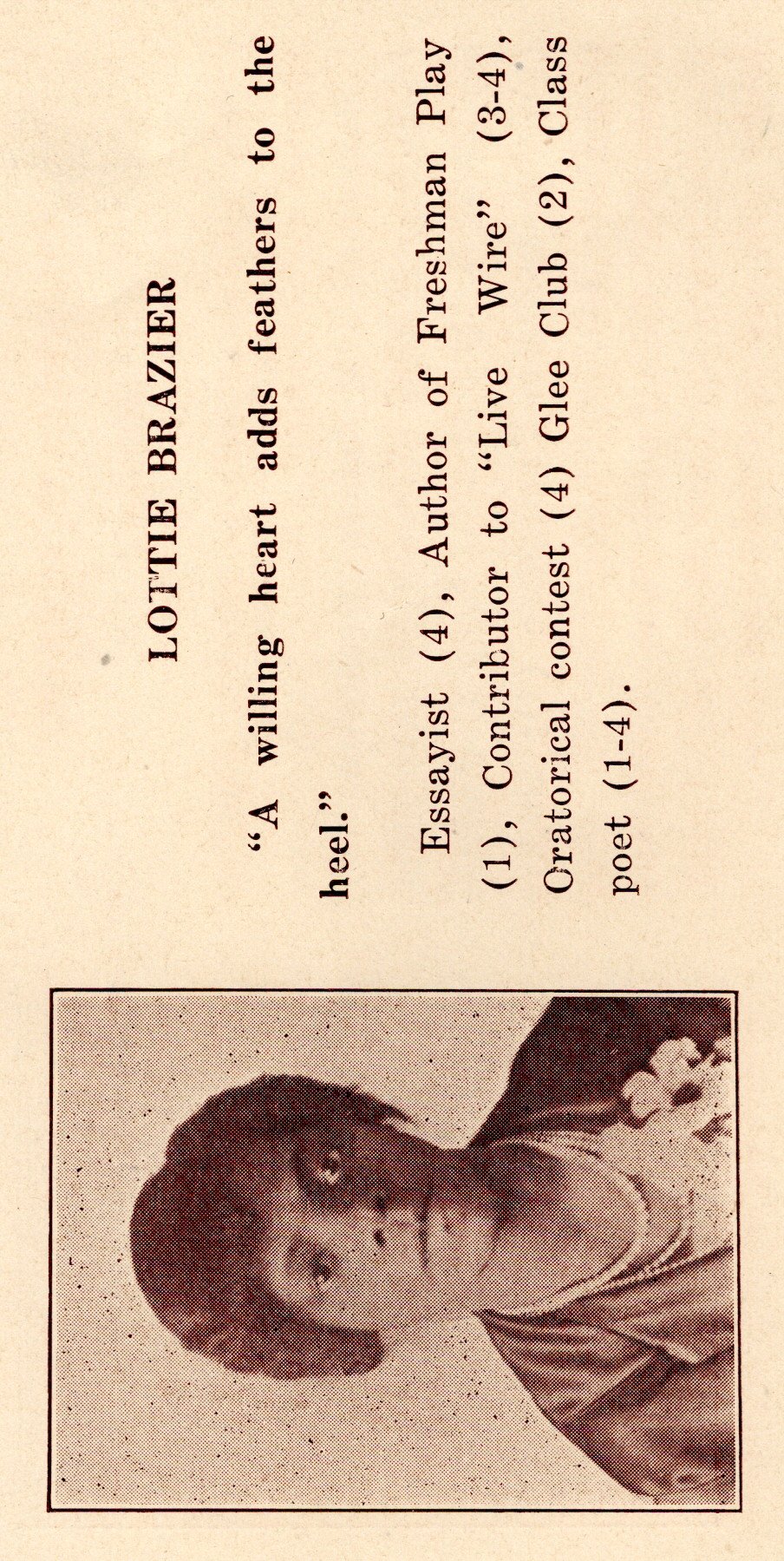 Georgiana Mitchell Brazier was born to Seebry and Harriet Smith Mitchell on August 26th, 1859 in Smithtown. The Mitchell’s raised their children in a community descended from freed slaves that would eventually build the Trinity African Methodist Episcopal (A.M.E.) Church on the corner of New York Avenue and Wildwood Lane. Georgiana was one of thirteen siblings, including her sisters, Augusta “Gussie” Lewis, Nellie Bunce, and Harriet “Hattie” Wood. Georgiana married Charles Brazier Sr. in 1882; together they had at least seven children. Georgiana was a laundress or ‘houseworker’ by trade. Charles Sr. died in 1919. Georgiana died in 1933 at the age of 74 at her daughter Bertha’s home on Bayview Avenue. 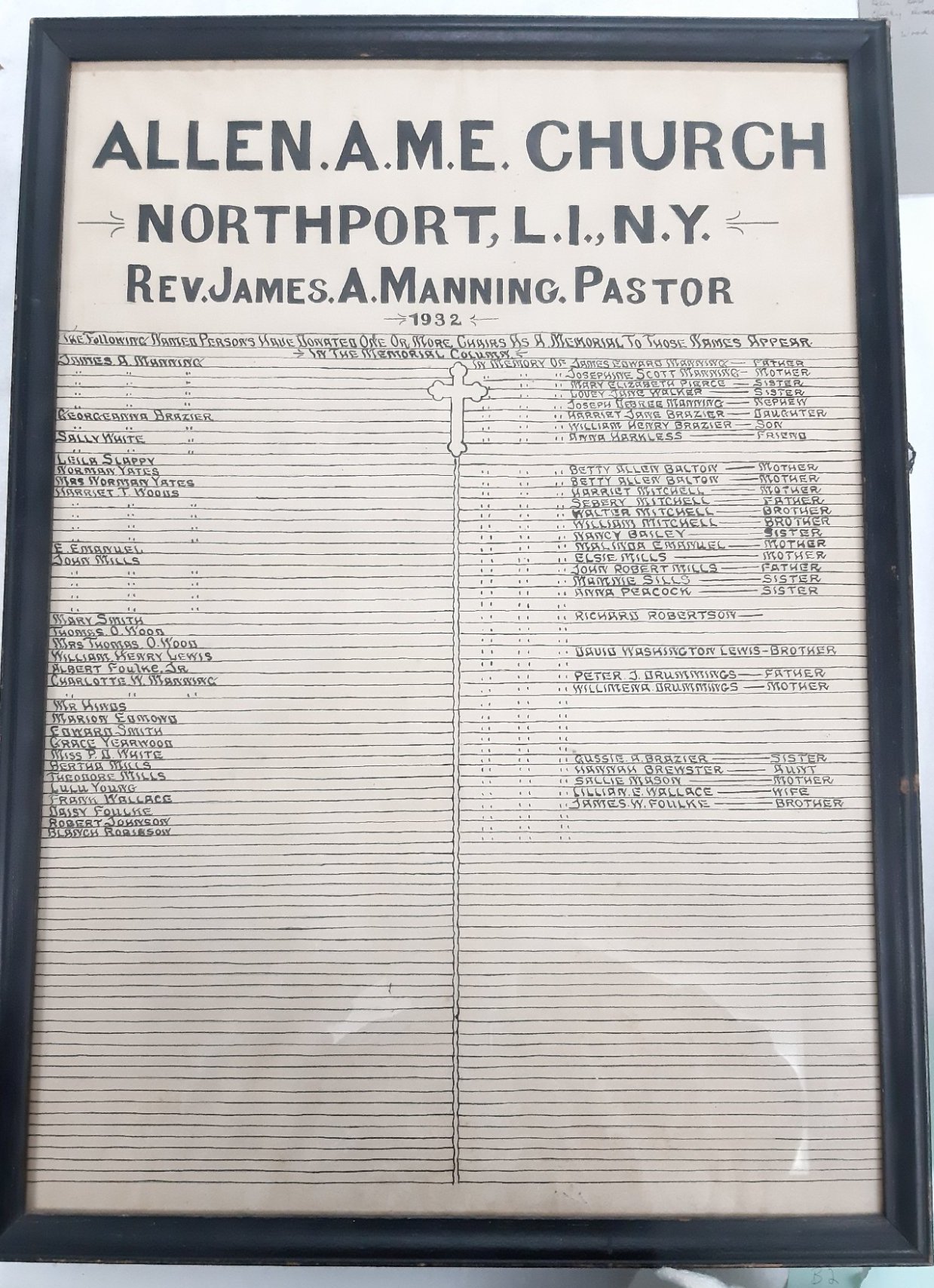 List of individuals who donated seats in Allen A.M.E. Church in memory of loved ones. Copyright Northport Historical Society 2022. 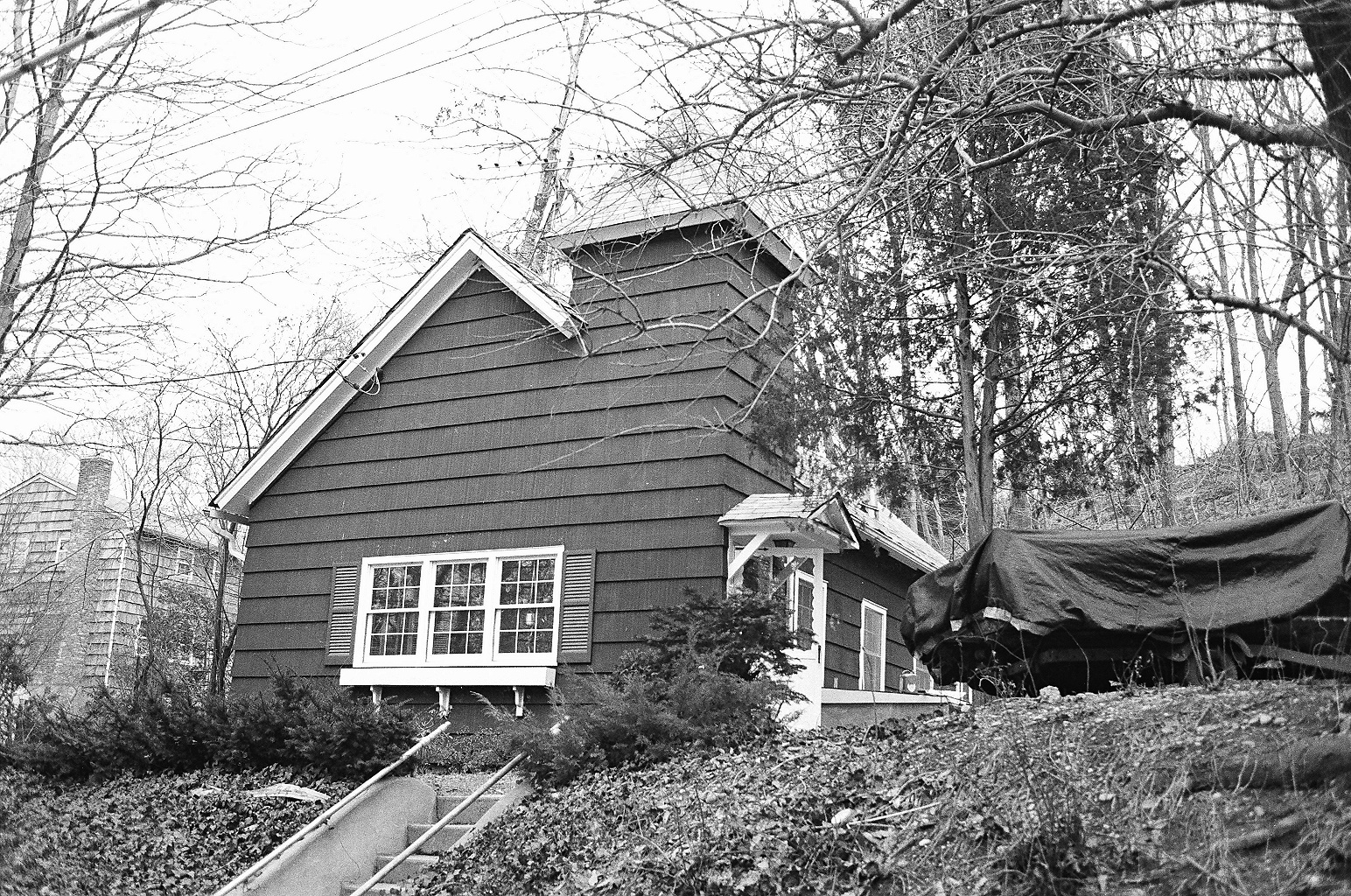 Georgiana had two sons who lived to adulthood, Charles Jr. and Percy. Only one anecdote from Percy’s life is available in local papers. In 1926, Percy was working as a chauffeur for Dr. Dewitt Clinton MacClymont. The doctor lived next to the Northport Fire Department building (built in 1905, this firehouse and the MacClymont property was demolished in 1955 to build the present building). One day in February, while pouring gasoline into the tank of one of the doctors cars, the gas suddenly ignited. The Northport Journal reported that Percy’s clothes caught on fire and that he was “slightly burnt” on the leg. Thankfully, Percy survived, but the garage and its contents (including one of the cars) were unsalvageable. He died in 1937, the same year as Charles Jr. (born 1890). 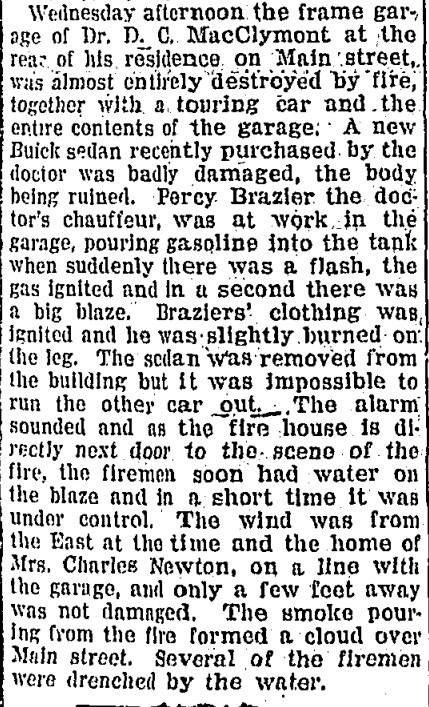 Bertha Brazier was born on May 25, 1883. In the early 1900s, she worked at the law offices of Allen Miles. Theodore Mills worked across the street as a coachman for one C.K. Robertson; he and Bertha married in 1909. Theodore’s work connected him to big names in Northport politics, including Edward Thompson of the law book publishing company; later, at the time of his golden anniversary in 1956, he worked for Judge Richard Hawkins and Susan Quackenbush. According to a letter by Carrie G. Watson published in African Americans in Northport, the Mills’ eventually worked as house staff for the MacClymonts, just like Percy. This would have occurred before 1941 when the doctor died and his widow, Carrie Rosencrantz MacClymont, left for Glendale.

The couple settled in an apartment building at the east end of Bayview Avenue now acting as the law offices of Bushell and Kleczka; other African American families lived there as well. Bertha and Theodore had no children of their own, but they made their home a center for their family. As mentioned previously, it was with Bertha that Georgiana spent her final days. In 1945, the couple held a reception for fifty people after the christening of a Brazier great-niece, Linda Vivian Calvert, at the Allen A.M.E. Church. Linda is misremembered as the Mills’ granddaughter in the Watson letter. 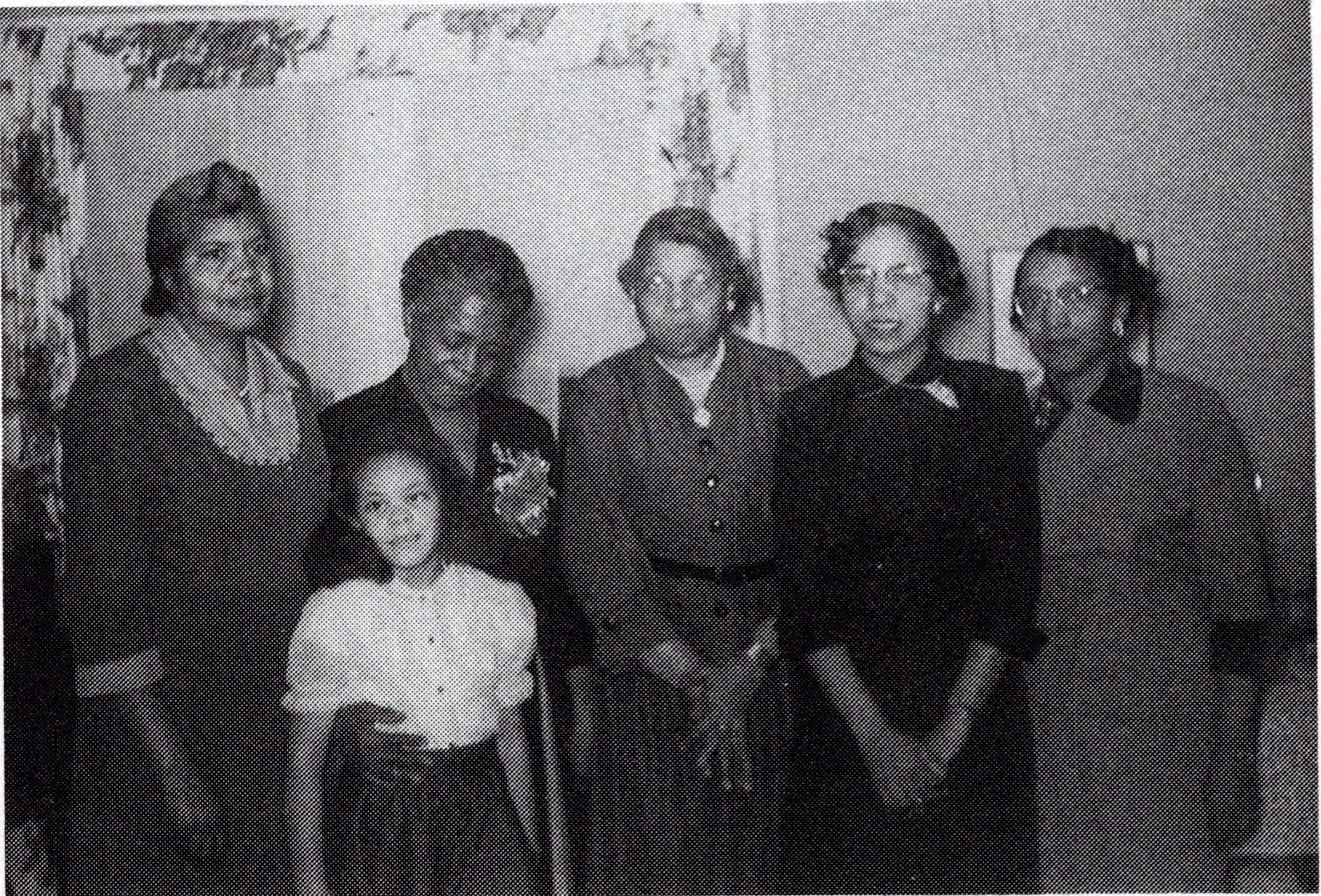 Bertha Mills, second from left, with Linda Viviane Calvert, 1940s or 1950s. Could one of the other women be Lottie Brazier? Photo from African Americans in Northport: An Untold Story by Thelma Jackson, 2000.

Lottie Brazier was a gifted writer. The Northport High School yearbook for the class of 1927 is full of her words. Lottie was born on June 9th, 1909; that means Georgiana would have been fifty-years old when her youngest was born, and her next-youngest child, Bertha, would have been twenty-six and married. Lottie is listed as Georgiana’s granddaughter in the New York State Census from 1925, and in Bertha’s obituary Lottie was listed as her daughter. 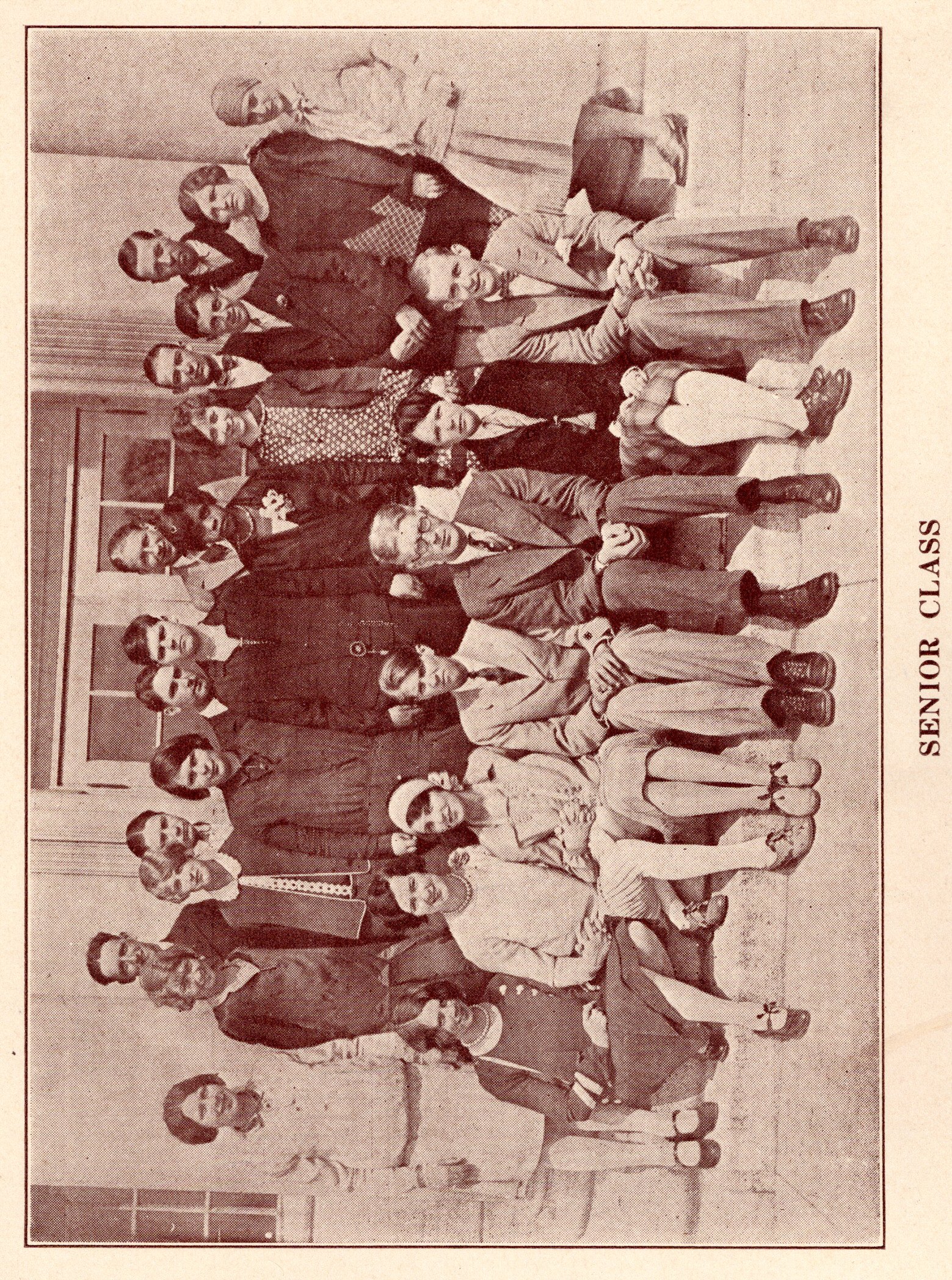 Lottie was a very active member of the Northport school community. In the summer between her middle grade and high school careers, in 1923, Lottie was one of two participants from the Town of Huntington to enter the Suffolk County spelling bee. She was the author of the Freshman Play. She was Class Poet every year of her high school career. She sang in the Glee Club as a sophomore and contributed to Northport’s first student newspaper, the ‘Live Wire’, as a junior and senior.

In 1926, Lottie helped organize an evening of music and dancing at the Huntington Odd Fellows Hall, which had been established by Charles Ballton, son of Greenlawn’s Samuel Ballton of pickle fame. Since its beginning in 1922, the fraternal hall had become an important meeting place for African Americans throughout the township. 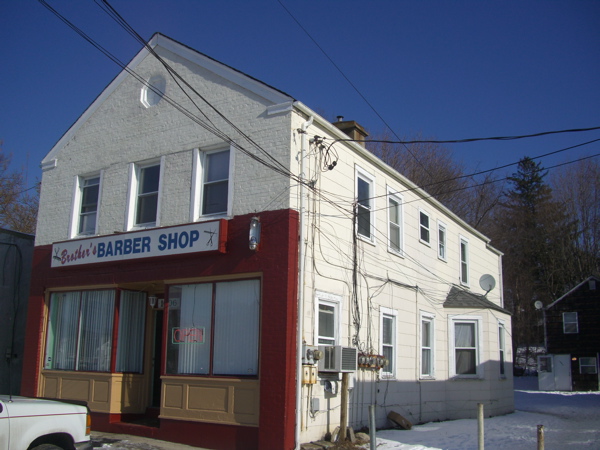 During her senior year, Lottie was one of three contestants to try out for a national oratorical contest in the high school auditorium. She lost, but that did not stop her from giving a speech at graduation entitled “The World Court”. We do not have a copy of Lottie’s oration, but we do have her yearbook. As you can learn from the blog on vintage yearbooks, it was customary for seniors to write a ‘class history’ reflecting on years past, and a ‘class prophecy’ to jokingly imagine their peers’ futures. Lottie wrote both for the class of ‘27. She also collaborated with the yearbook’s literary editor, Denise M. Abbey, on the poem, “Recessional of the Class of ‘27 (With apologies to Mr. Kipling)”. 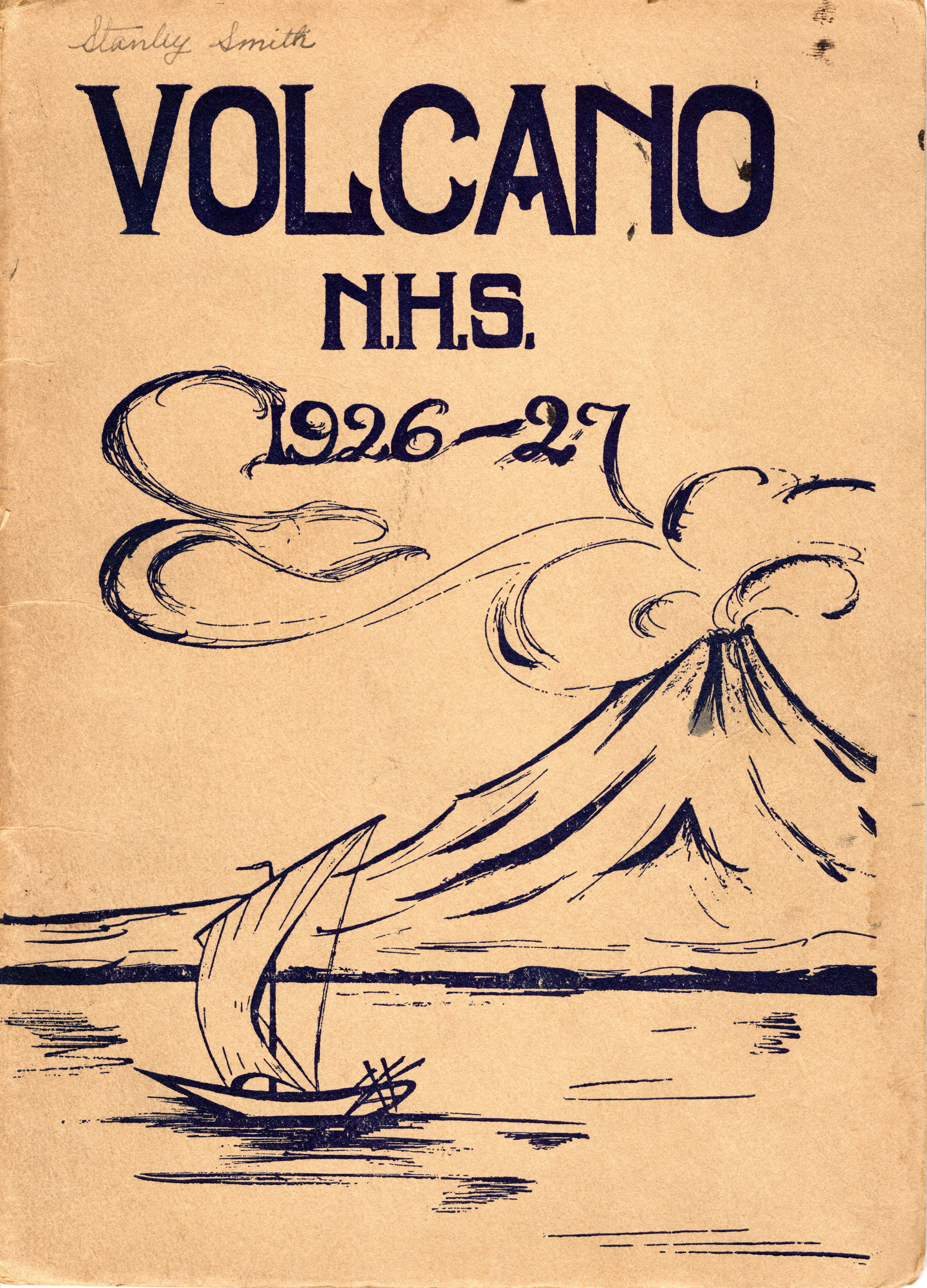 Unlike other yearbooks of the 1920s and 1930s, 1927 has a unique title, “Volcano”, and sports cover art reflecting an extended metaphor used by Lottie in her class history. She begins:

“As early as the year 1923, a new race of people swept down upon Northport High… As to their nature, it was volcanic in the main and placid around the edges…  Almost at once they were dubbed “Freshmen”.”

One wonders what Northport would be like if our mascot was a volcano rather than a tiger (which would not become the school symbol until the 1940s). In line with the sarcastic yet loving tone of yearbooks from this period, Lottie continues with tongue in cheek.

“ [After New Years, 1927] ... Action started again. There were invitations to be ordered, cards to be printed… And in between all these things was the trip to Washington, an account of which I am forbidden to write except to say “a good time was had by all”.”

She wasn’t forbidden, of course; she was saving the story for a different feature. 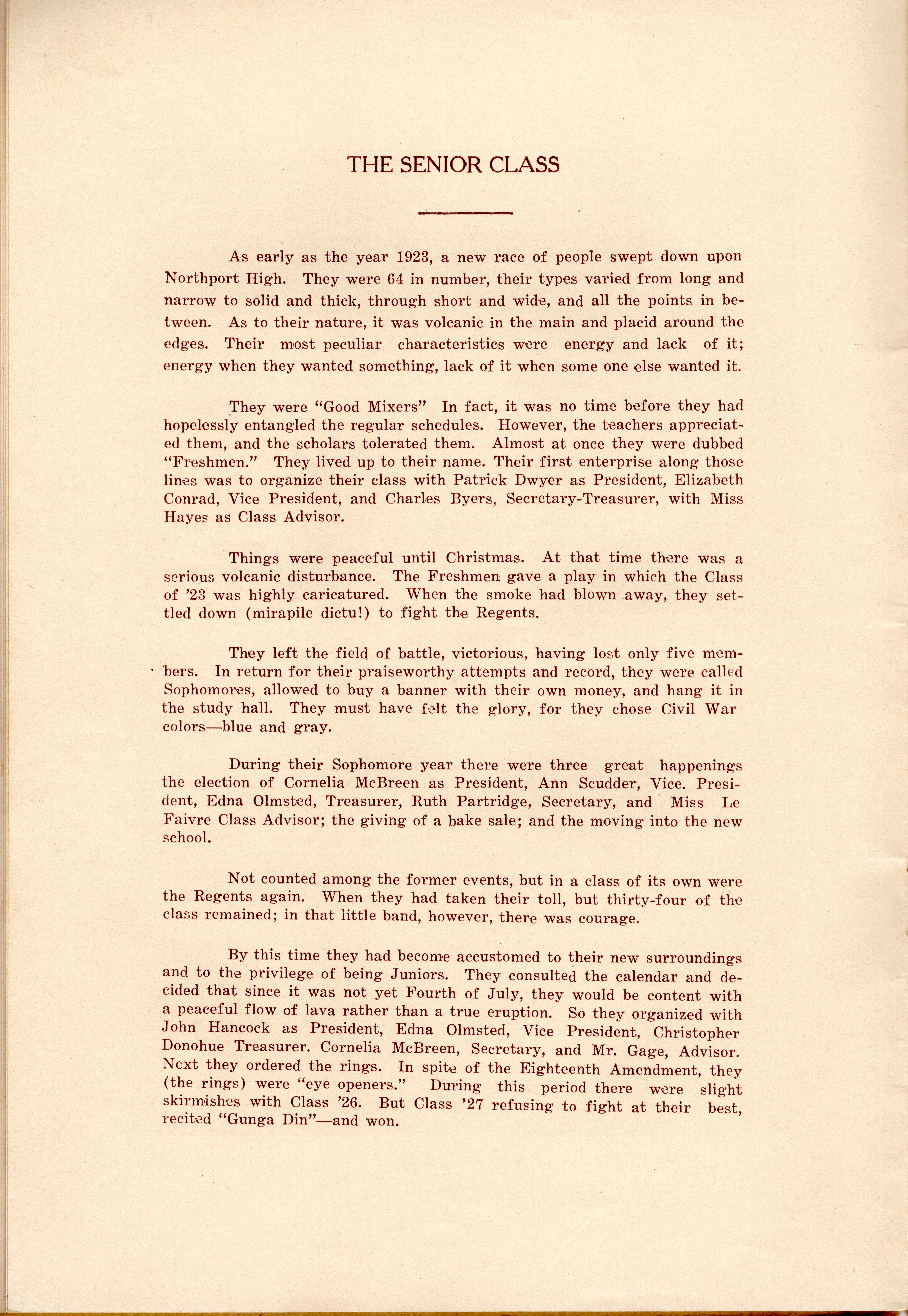 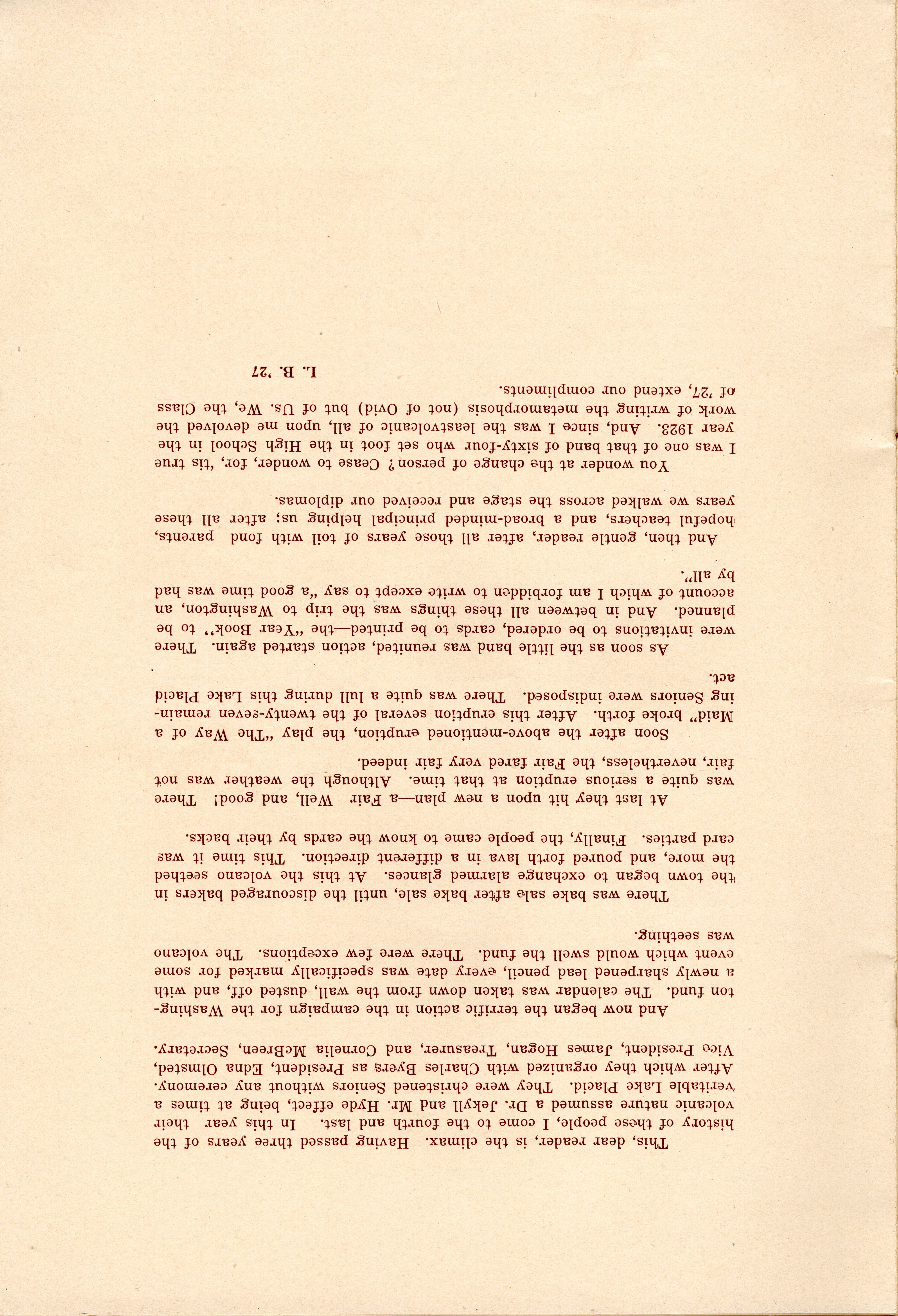 She put aside the volcano metaphor for the class prophecy, but not the wit. “I peer into my crystal ball (a mere figure of speech. To be exact it is paper.)” she begins. She predicted Eric Ericson would become the world “Harmonica laureate” and Oscar Anderson would receive a medal for teaching baby elephants to play basketball. 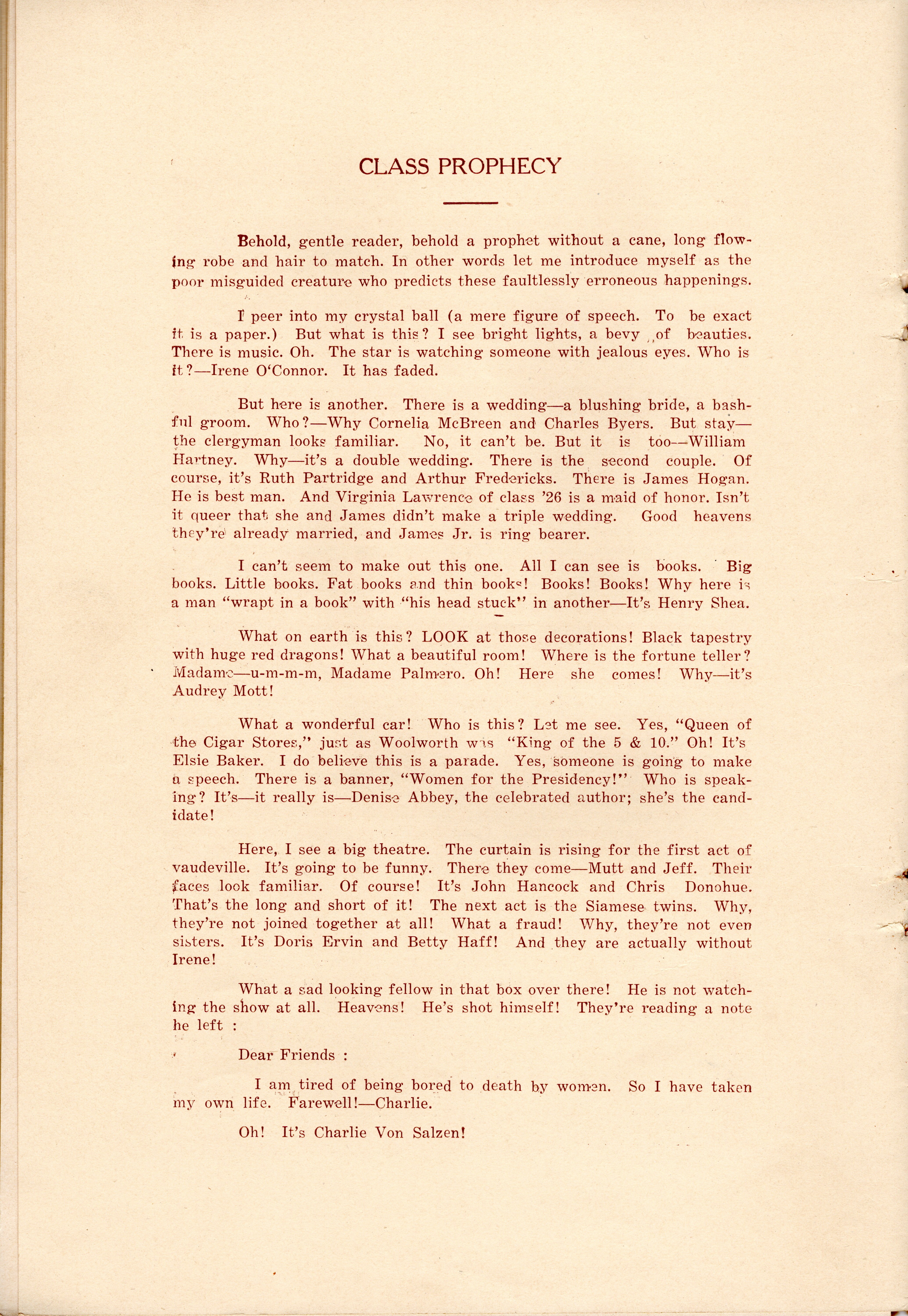 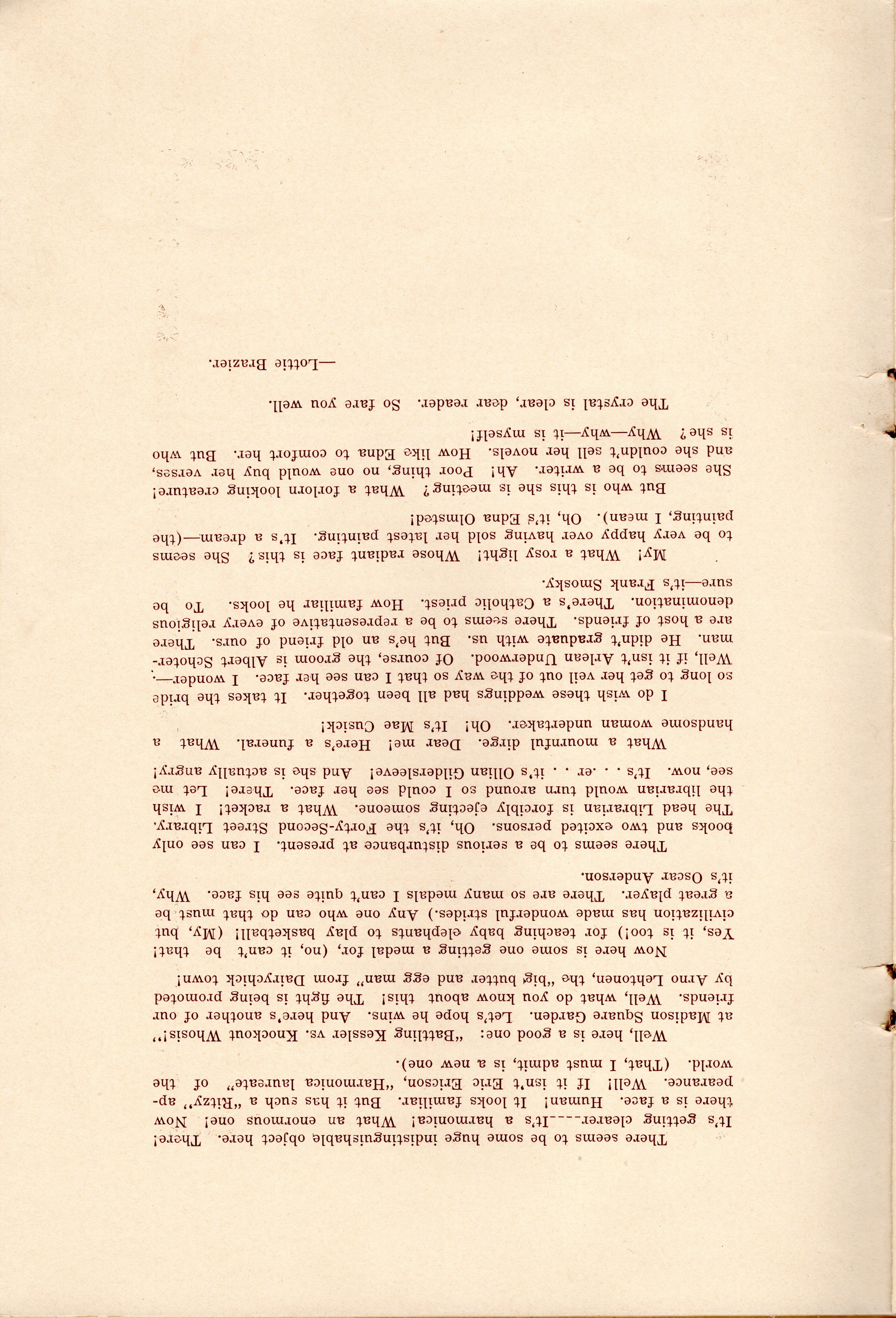 The most heartfelt details in Lottie’s pieces are her references to herself. These give us the only pieces of emotional insight we have to any Braziers.

From the class history:

“...‘tis true I was one of that band of sixty-four who set foot in the High School in the year 1923. And, since I was the least volcanic of all, upon me devolved the work of writing the metamorphosis (not of Ovid) but of Us.”

From the class prophecy:

“My! What a rosy light! Whose radiant face is this? She seems to be very happy over having sold her latest painting. It’s a dream--(the painting, I mean). Oh, it’s Edna Olmsted!

But who is this she is meeting? What a forlorn looking creature! She seems to be a writer. Ah! Poor thing, no one would buy her verses, and she couldn’t sell her novels. How like Edna to comfort her. But who is she? Why--why--it is myself!”

Lottie depicts her friendship and artistic commiseration with Edna very sweetly, but unfortunately there are no other records connecting the two women. Edna Olmsted would later find short-lived fame as the international travel companion of Lila Roosevelt and a long career as an engineer for the Roanwell Corporation working on the microphone used in space by astronaut Alan Shepard. 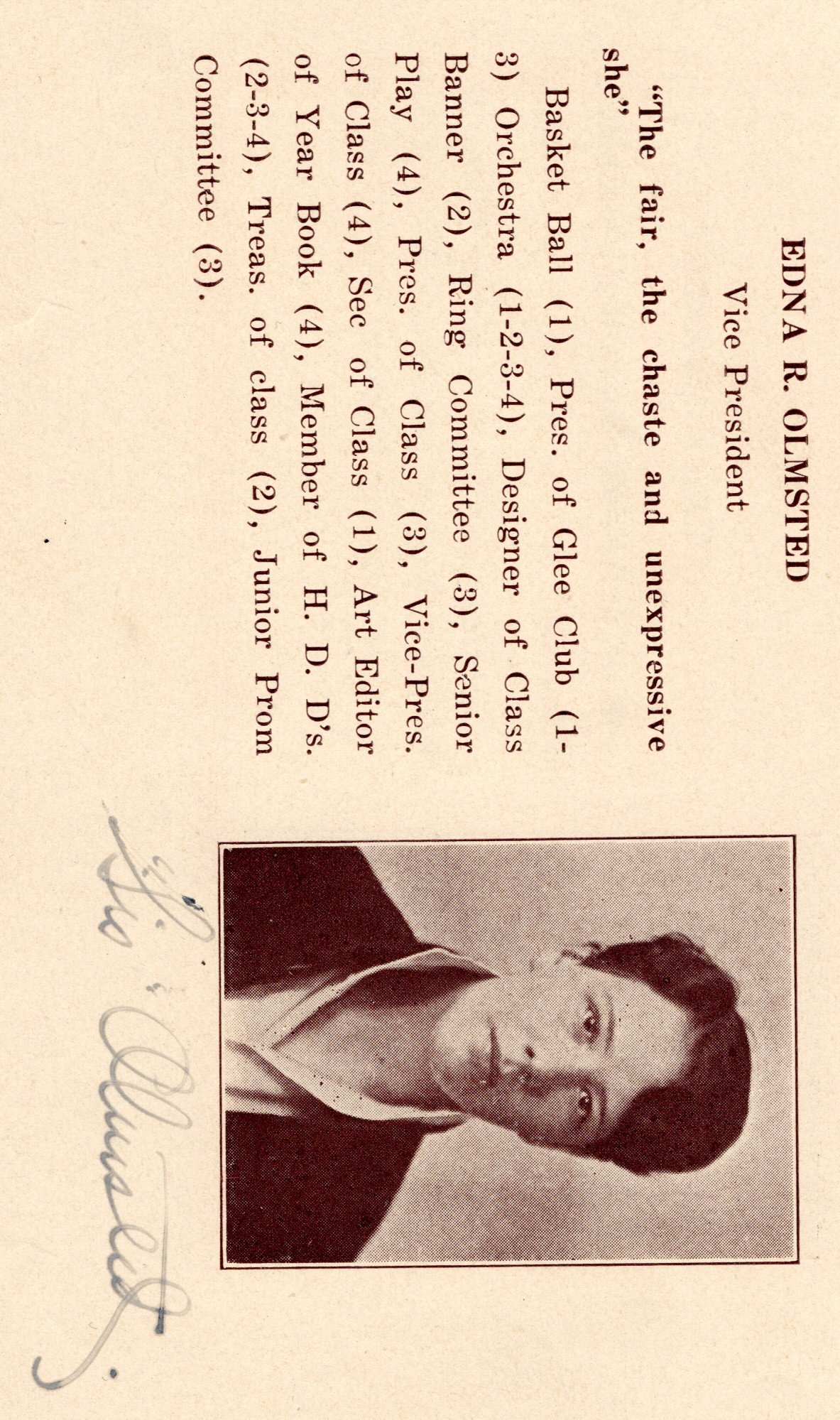 “The least volcanic of all”, who relates to Ovid but shies away from comparing herself to him. The prophet who only commits visions of disappointment to paper. This is the most heartbreaking part of Lottie’s character. The words may have been written in humility, but they represent Lottie’s clearest moment as an oracle. 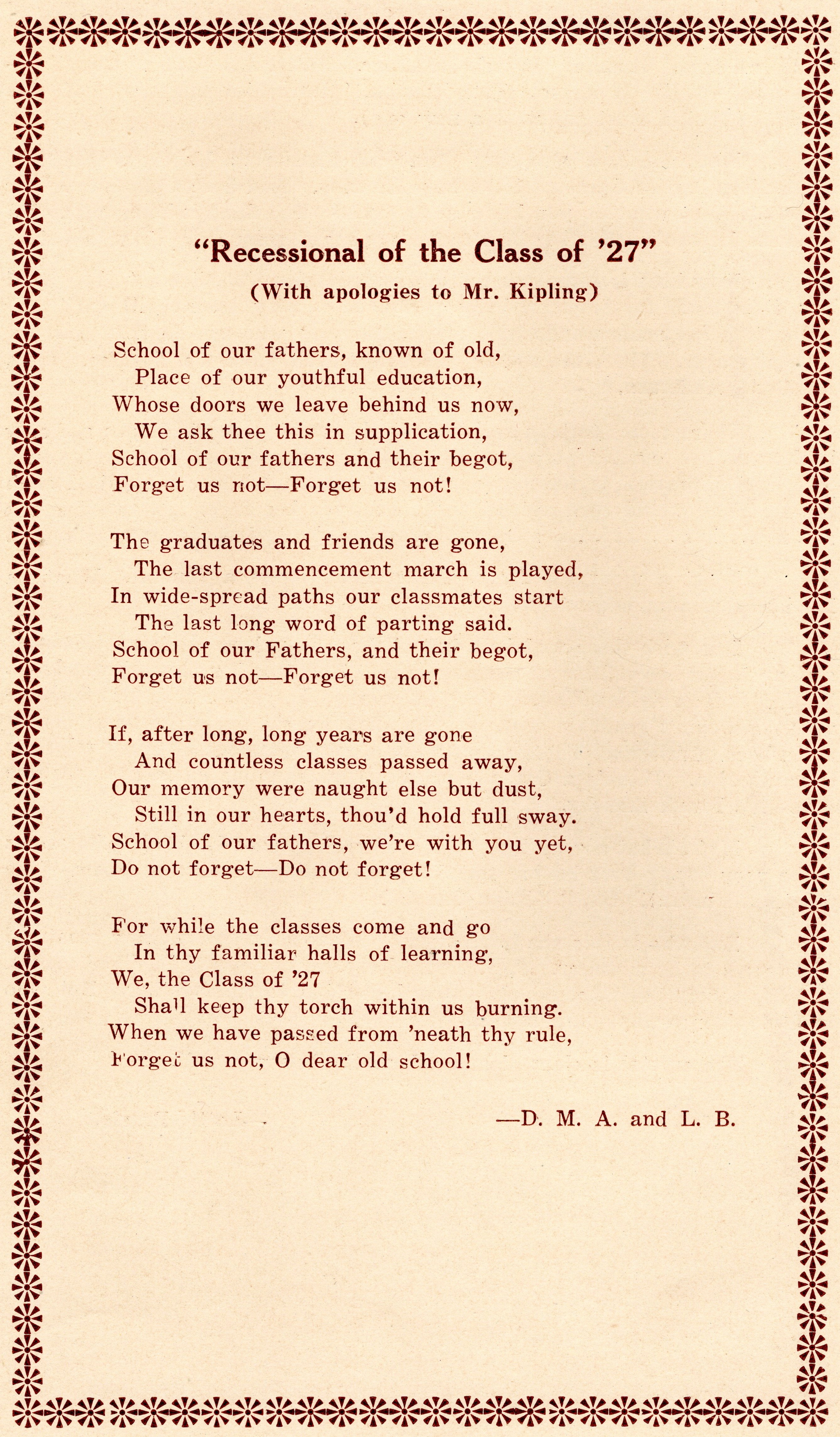 The world should now have been before Lottie. One hopes that she continued writing, but if she did, we have none of what she produced. Instead, there is a social note from the Northport Journal in April 1928 that Lottie had entered a three year ‘trade dressmaking and costume design’ course at the Pratt Institute in Brooklyn.

From here on, Lottie’s life comes to us in bits and pieces. At Georgiana’s death in 1933, one of her two daughters is listed as “Mrs. Robert Price” of New York City. Newspaper searches find no announcement of this marriage. Who was Robert Price, and how did Lottie meet him? Where in the city did they live? Was this a strange misprint from the paper? Even more interesting is the question of the possible Mr. Price’s death or divorce.

By 1945, Lottie is Mrs. Wayman Mathews, and the couple are standing as godparents to Baby Linda. The Mathews’ lived in Floral Park, possibly near the Calvert family, and were regular guests of the Mills’ on Bayview. The final insight into Lottie’s life comes in 1957, when Bertha and Theodore proudly advertise their visit to Lottie in Glen Oaks to celebrate her graduation from Gray Scientific Beauty School.

What encouraged Lottie to take this course of study? A creative thread can be drawn from her love of writing, to her interest in dressmaking, to beautician training. But it is a shame that more is not known about Northport’s little volcano who was so eloquent yet shy in her writing. Lottie Brazier Mathews died in 1982; she is buried in Genola Rural Cemetery along with her mother and siblings. 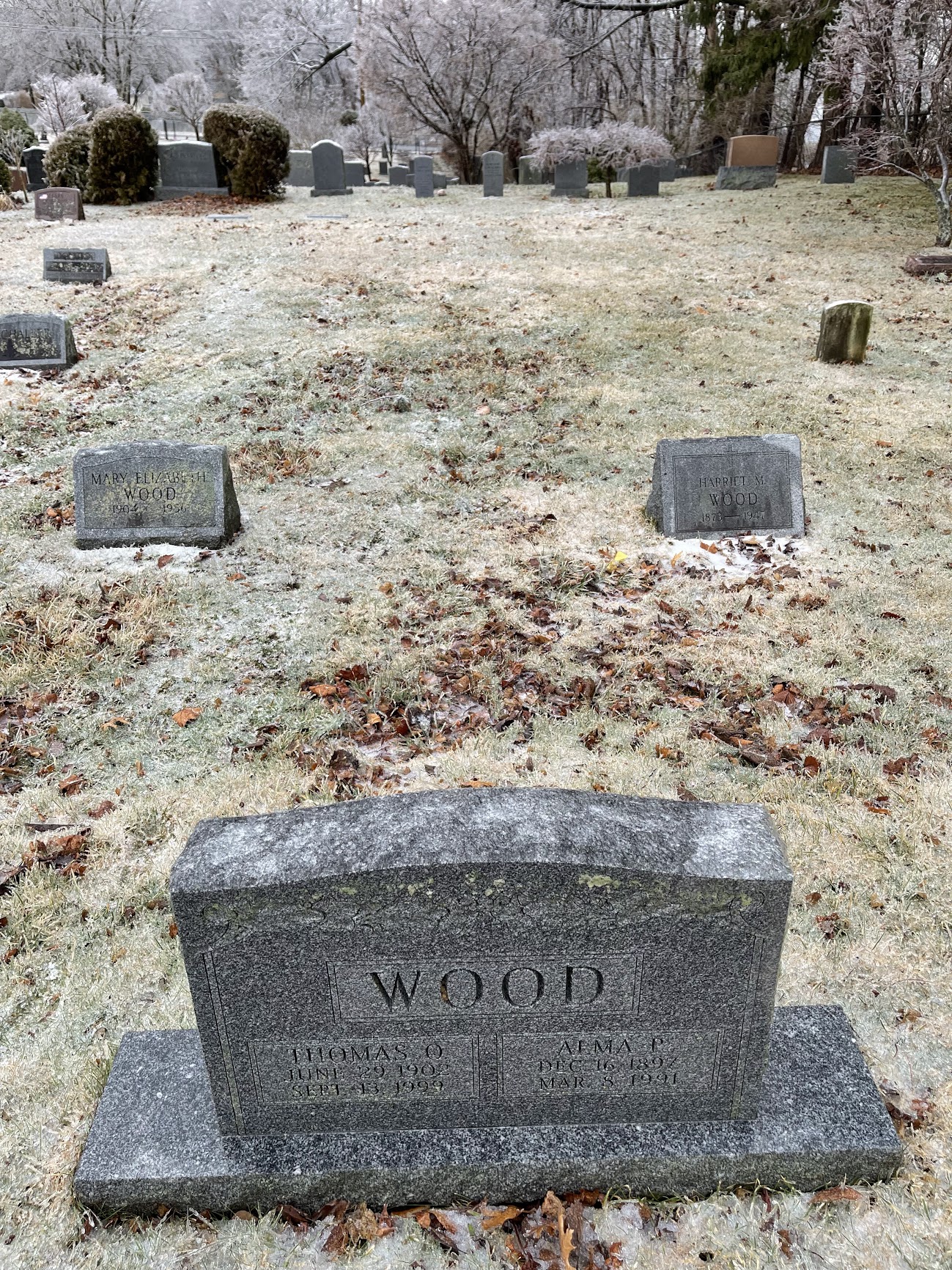 The Brazier plot is in the empty space beyond the gravestones of Mary Elizabeth and Harriet Woods. The Brazier plot has no headstones. Photograph by The Northport Historical Society 2022.

The Northport Historical Society welcomes communication with descendents of the families mentioned here. You can find copies of Northport High School Yearbooks here and at the public library. For further reading, see African Americans in Northport: An Untold Story by Thelma Jackson.