June is Pride Month, when people around the world celebrate the diverse ways in which humans love each other, and honor the civil rights battles LGBT people fought before and continue to fight today. 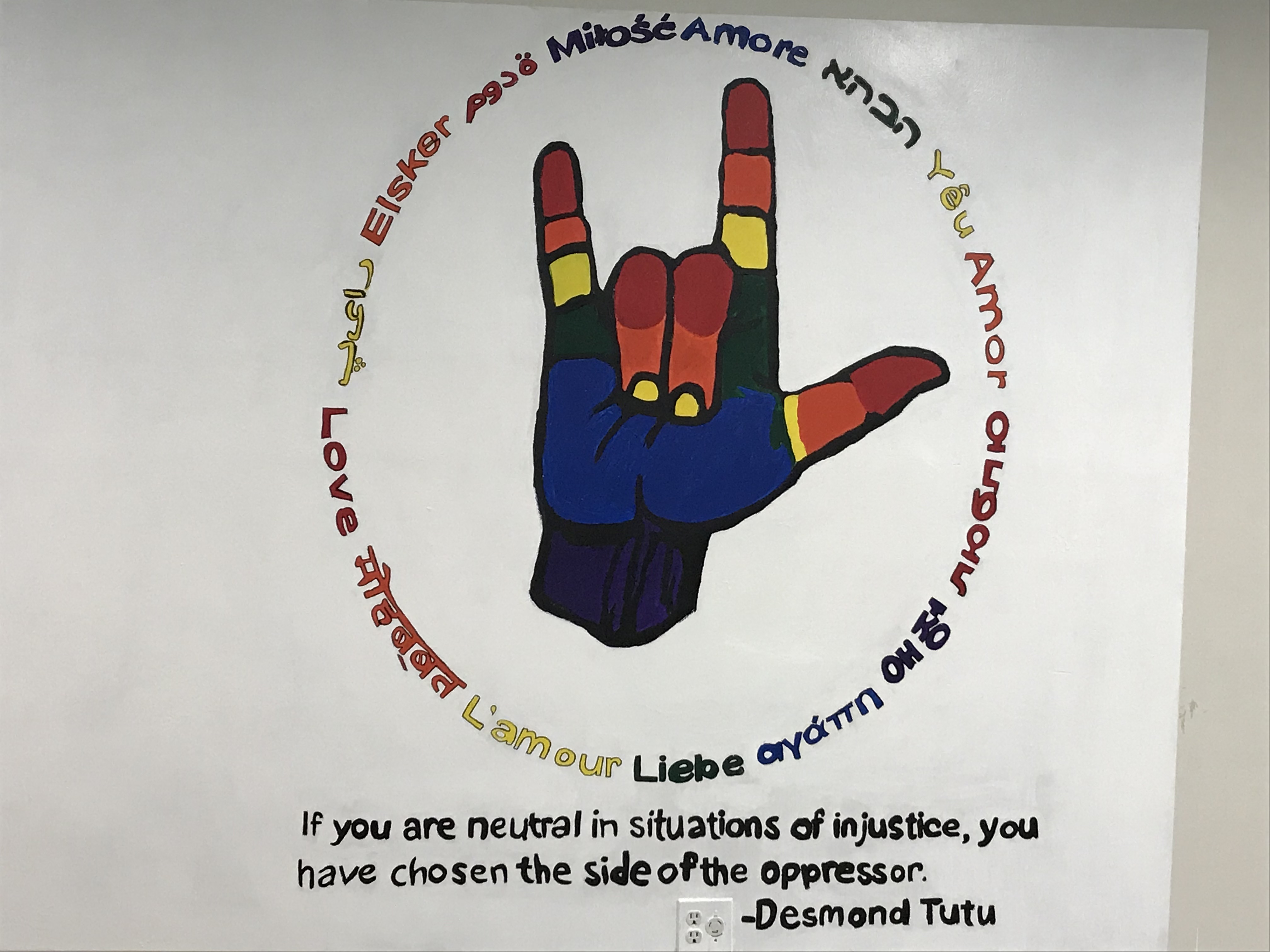 The first Pride marches started in America in the wake of events like the Stonewall Riot in New York as a way to support the gay liberation movement inspired by the civil rights movement. The 1950s saw buttoned-up protests against discrimination, organized by gay right’s groups like the Mattachine Society, where men were required to wear suits and women skirts or dresses. In 1969, police attacked patrons like activists Marsha P. Johnson and Sylvia Rivera at the Stonewall Bar on Christopher Street, a popular spot for LGBT residents. The patrons chose to fight back, and soon after began to create organizations lobbying for judicial change and legal protection for LGBT people. The first Pride parade was held in Manhattan in June 1970 to commemorate the anniversary of the Stonewall Uprising. While the Pride parade has American roots, the parades have become a way for people all over the world to show their communities and governments that being LGBT is not dependent on race, class, or creed, and a platform from which to call for equal rights and protections. Pride in Northport and on Long Island

While there have always been LGBT people in Northport and beyond, fear of backlash and social taboos make it very hard for historians to understand what kind of LGBT communities existed before people began to talk openly about being gay, bisexual, or transgender in popular media.

Some of the first recorded instances of LGBT life in the Northport area begin with the 1991 Huntington Pride controversy. That year, a group of students from Stony Brook University and other LGBT locals decided they would form a committee to create the first Pride parade on Long Island. They reached out to a number of towns on the island, including Huntington, Port Jefferson, and Northport. Both Port Jefferson and Northport, fearing community response, denied the group on the grounds that green-lighting a parade hosted by people who were not “locals” (the Long Island-based parade committee had a mailing address in Upton, NY) would set a bad precedent. Northporters expressed both support and derision for the decision. Michael Carr was particularly outspoken in a letter to the editors of The Observer on April 11, 1991:

“It is my opinion that any group dedicated to the goals of promoting greater understanding among people, installing a sense of pride and self-worth in those that have been let down by society, education of the general public, and and working towards achievement of mutual respect, understanding and friendship, should always be welcome in any area, for the good of humanity.”

The parade committee eventually settled on Huntington, but faced further backlash when the Huntington Highway Superintendent tried to pressure the group into cancelling the parade. The committee got in touch with the New York Civil Liberties Union which took the town to court. After a few hours before the district court, the Town of Huntington agreed to permit the parade. The event itself was joyful, with anywhere from 800-3000 people parading and observing from the sidelines.

Huntington Pride eventually came under the leadership of the Long Island organization LGBT Network. In 2018, the event moved from Huntington to Long Beach. This year, the event was moved back to Huntington in the wake of the COVID-19 pandemic. Members of Northport and East Northport’s LBGT community attend Long Island Pride every year. 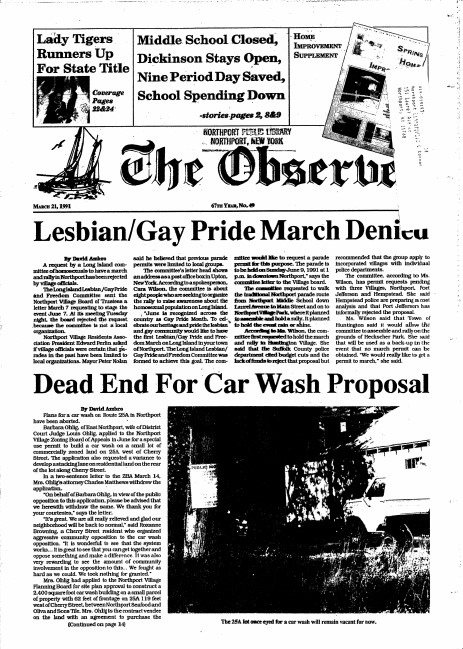 Front page of June 1991 Newsday along with tank top from the first LGBT pride parade in Huntington. Photo by Kyle Barr in his article "History of Pride LI's First Pride March Reveals History of Fighting Prejudice."

In 1995, parents and members of local churches raised objections to the inclusion of an anti-homophobic bullying workshop included in a health fair at Northport High School. Presented by the Long Island chapter of Parents and Friends of Gays and Lesbians, the workshop was meant to dispel negative stereotypes about homosexuality. The workshop was organized in the wake of complaints from students and teachers about rampant homophobic bullying in the high school, and had already been a part of the Health Fair in 1994. Parents and church elders called for the workshop to be removed from the 1996 health fair lineup. 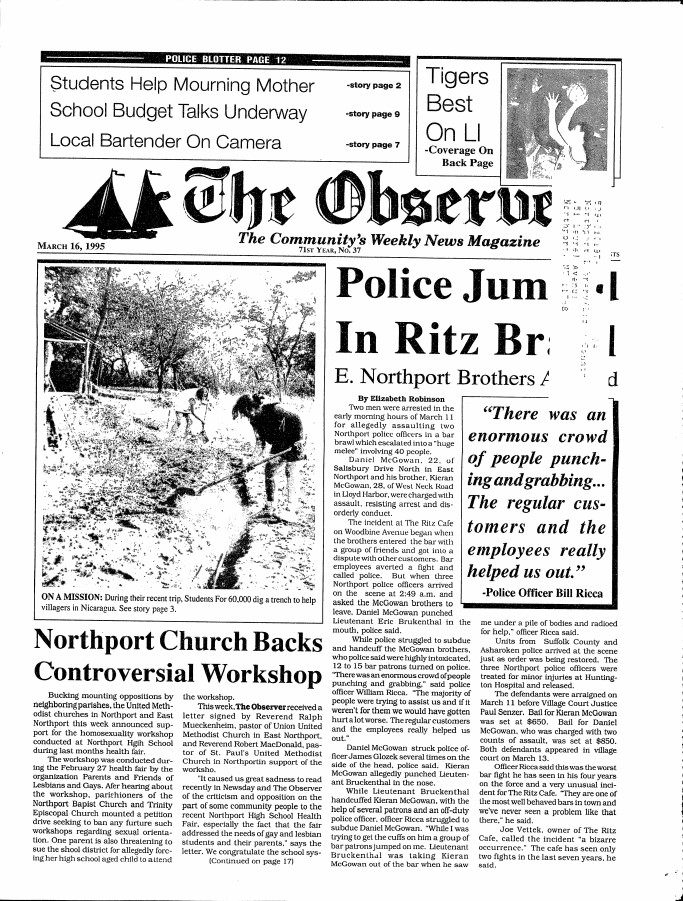 “We congratulate the school system for including gay and lesbian themes in the health fair. We are proud that our school district includes the health needs of all our students, and in so doing affirms the existence of a homosexual orientation among our population. Whenever humane people promote sensitivity, tolerance and understanding in hopes of better community harmony and respect, we applaud such efforts. Hopefully, the health fair is one step in overcoming the destructiveness of homophobia.”

The outcome of the controversy was not recorded in the local papers.

Despite some pushback, Northport High School has had clubs to provide support for LGBT students and families for the last two decades. Starting in the 1990s-2000s there was People Respecting Individuals, Sexual Minorities (PRISM), and by 2005-2006 the Gay Straight Alliance (GSA). The existence of these clubs and other projects around the school are a litmus test for the growing spirit of inclusion and respect in public schools. In 2011, the Northport High School student-run Theater Troupe performed The Laramie Project, in which actors speak the words of real residents of the town where gay University of Wyoming student Matthew Shepard was murdered. The students hoped that by putting on the show, they would be helping “to promote tolerance on all levels.” 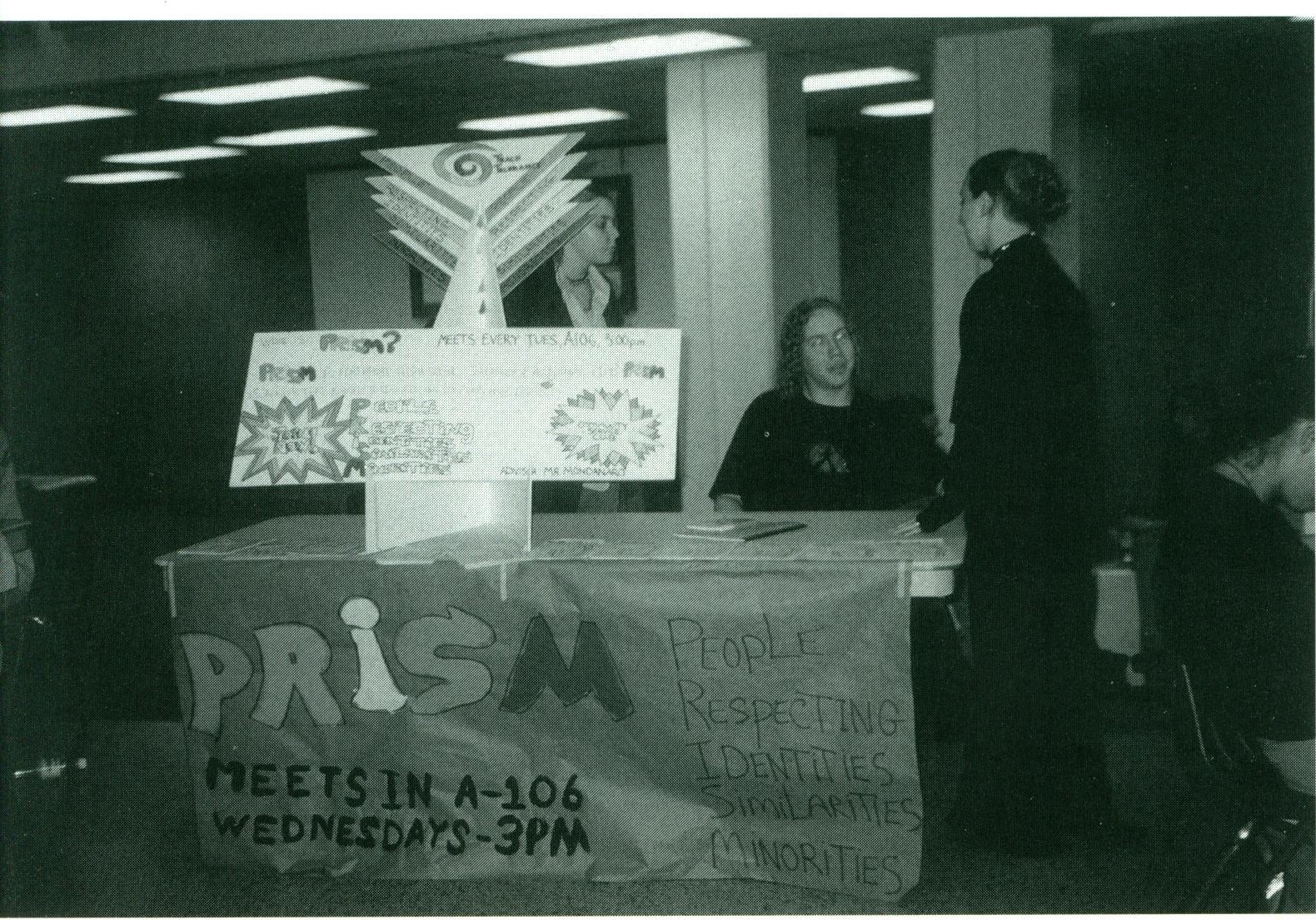 2015 and 2016 were turning points for LGBT people in Northport and across the country. In June 2015, the Marriage Equality Act was passed by the Supreme Court, making same-sex marriage legal nationally. By February 2016, the congregation of St. Paul’s United Methodist Church in Northport voted to become a ‘reconciling’ church that allows all people to participate fully in church life including “leadership, ministry, and sacraments” (The Observer, February 11, 2016). The same year saw the Northport High School GSA decorate the commons for National Coming Out Day and participate in the Day of Silence for the first time. National Coming Out Day, held in October, is celebrated by those who want to publicly affirm their own self-acceptance and encourage everyone to recognize the humanity in their LGBT neighbors. Day of Silence, which falls in April, is a more somber event. Organized but the national LGBT resource group GLSEN, students wear black and do not speak during the day in order to “protest the harmful effects of harassment and discrimination of LGBTQ people in schools.” The Northport GSA has built a network with other high school groups by connecting with organizations like LIGALY (Long Island Gay and Lesbian Youth) the LGBT Network, who gave the Norhtport GSA a grant in 2017 that the students used to create an anti-bullying photo campaign. Students continue to find safety and community in this important extracurricular today.

The Northport Historical Society is proud to record the history of all our residents, and to foster a spirit of inclusion and acceptance in our beautiful village and surrounding towns.